Logos users may want to take a look at this month’s deals. And definitely don’t neglect the free book of the month.

(Yesterday on the blog: A Pastoral Prayer)

Here’s Christianity Today on Benny Hinn renouncing his selling of God’s blessings. “Some of the Christians who have watched him closest, however, viewed the apparent renunciation with skepticism. While they want to be open to the possibility of true repentance, and say God could have changed Hinn’s heart, they are waiting for some evidence of his transformation.”

“Breath means life. Most of us are breathing anywhere from 16,000 to 23,000 times a day. It’s incredible to think how God sustains our lives, moment by moment, with the simple act of breathing. Paul writes that God doesn’t depend on us, but we on Him: ‘he himself gives to all mankind life and breath and everything.’”

Where Do the World’s Oceans Meet?

“Like national borders, the boundaries of the five oceans are clearly defined by the International Hydrographic Organization, although not everybody agrees with these boundaries, such as the CIA World Factbook.” Still, it’s interesting to see where most people agree one ocean turns into another.

“Paul tells the communion church that they have to examine self. What sort of examination is required of Christ’s communicants?” Here are some brief thoughts on self-examination before communion.

Do We Play Any Role in Our Sanctification?

You probably know the answer—but it’s still good to be reminded. “The battle image is a very active image. Soldiers in battle are not passive observers. They’re not sitting there watching life go by. They’re as actively engaged as anybody could be in any activity. So, too, we are called to be actively engaged in sanctification. It is our great calling to pursue holiness, to aspire to that for which God has called us, and to strain every effort that we have.”

New Zealand has a rat problem, and here’s how they are attempting to solve it.

I, too, am thankful to have had the double blessing of a mother who stayed home to dedicate her life to her children and a wife who has done the same. (Or, let’s call it a triple blessing since Aileen’s mom, too, stayed at home for the kids.)

Flashback: The High Calling of Bringing Order From Chaos

Man was created to work, to work within God’s good creation. And it is not only work that has dignity, but the specific work of bringing order from chaos, of bringing what is unformed into the state of being formed. 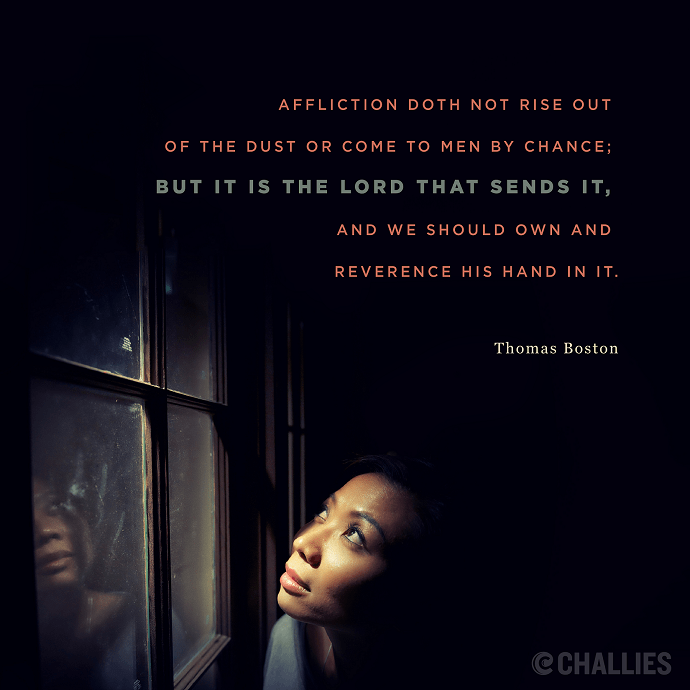 Affliction doth not rise out of the dust or come to men by chance; but it is the Lord that sends it, and we should own and reverence His hand in it. —Thomas Boston