May God bless you this weekend as you serve him and remember the day of Christ’s resurrection.

(Yesterday on the blog: Always Read the Story to the End)

When It’s Time to Leave a Church

There can be very legitimate, but also very illegitimate, times to leave a church. H.B. Charles Jr. offers some ways to distinguish them in this article.

The World Wants Us To Hate One Another (Video)

We’d all do well to consider what Todd Friel says here—that the world wants Christians to hate one another.

It’s interesting to read how the UK seems to have been able to turn the trans tide, at least for now. “After years in which the trans-rights movement seemed unstoppable, Britain has put the brakes on. The government has abandoned a proposal to streamline ‘gender self-identification.’ Bien-pensant opinion has become more skeptical. Whistleblowers from the medical world are speaking out. And in December 2020, the country’s only gender identity clinic for under-18s suffered a major legal defeat. It was about what happened next to Keira Bell.”

Trevin Wax considers the “Instagramification” of the Bible. “In talking with my daughter, I realized that all the anxious thoughts, weird postings, and strange obsessions that accompany social media platforms like Instagram had arrived on the Bible app itself. And while she enjoyed the connection she made to a few friends, the distraction of so many competing voices and the drive toward self-expression proved overwhelming. So, for her, it’s back to the printed Bible exclusively for now.”

It has been a long time since I’ve read an article from Car and Driver, but I found myself rather enjoying this description of the salvage of the MV Golden Ray. “Before it capsized, the MV Golden Ray shuttled cars through the auto industry’s global supply chain for two years, leading a nondescript existence in the world of modern shipping operations. More than two football fields long and 17 stories tall, this roll-on/roll-off vehicle transporter makes your double-decker pontoon boat look like a bath toy.”

Blame It On the Masons

“I found myself inwardly grateful for the simple honesty that following Jesus affords. We don’t have to latch on to elaborate stories to excuse away the actions of Christians who are not acting according to the Bible. We can simply say that their words and actions contradict God’s word – and that if they are true believers they will come to repent of them sooner or later. We don’t have to hide our own two-facedness, or that of our tribe. We can admit it, call it what it is, and bring it to the cross for forgiveness and change.”

Why Reading Books You Disagree With Helps You Grow

There is definitely something to be said for [sometimes] reading [certain] books you disagree with.

Flashback: How To Grow in Self-Confidence

I determined that when I spoke I would do so with God’s authority, not mine. I decided I wouldn’t stand up in front of people and share my own opinions or bestow my own wisdom. Rather, I would ground what I say in the Bible. 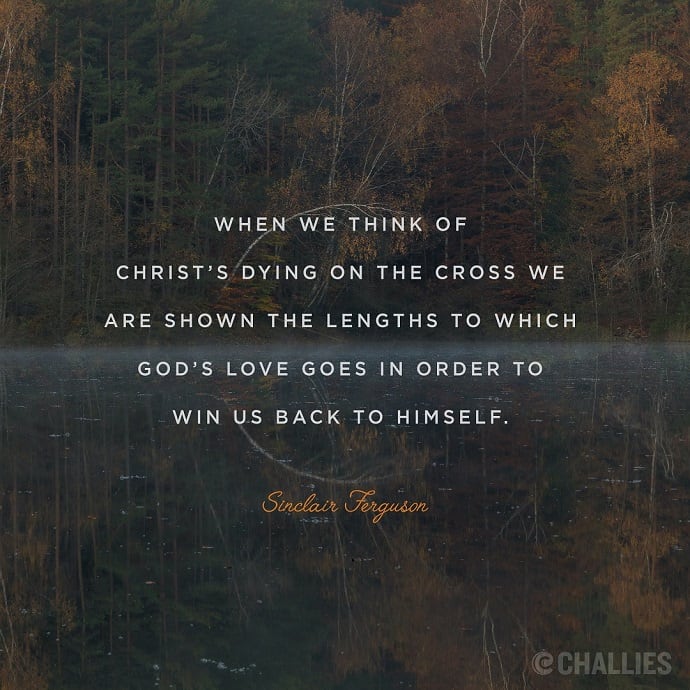 When we think of Christ’s dying on the cross we are shown the lengths to which God’s love goes in order to win us back to Himself. —Sinclair Ferguson