Today’s Kindle deals include a pretty good selection. You’ll find some older ones, plus some new ones like the highly-regarded A Big Gospel in Small Places.

Looking For a Church? Here’s What to Look For

Jim Elliff: “My list doesn’t include a gymnasium or a youth group that does a lot of fun things, since the Bible doesn’t require a church to have these amenities. Here are a few items, however, that are absolutely critical for your consideration…”

Jennifer Greenberg suggests six prayers related to sexual intimacy for those who have experienced some kind of sexual trauma. “Thankfully, God has blessed us with therapists, physicians, and medications that can help us manage depression, anxiety, and other emotional injuries resultant from trauma. Ultimately, though, only God can heal the soul. With that in mind, I’ve composed a series of prayers, in hope that you’ll be able to adapt them to fit your own situation, pray them for a loved one, or share them with a friend in need.”

It’s strange but true that Mao Zedong swimming in a river in 1966 was a big deal. Here’s how and why.

7 Details Christians Get Wrong about the Bible

I’m sure there are more we could add to this list, but here are at least seven things Christians tend to get wrong when discussing the Bible.

The Age of Decadence

New York Times columnist Ross Douthat explains why he thinks we are in an age of decadence. “We used to travel faster, build bigger, live longer; now we communicate faster, chatter more, snap more selfies. We used to go to the moon; now we make movies about space — amazing movies with completely convincing special effects that make it seem as if we’ve left earth behind. And we hype the revolutionary character of our communications devices in order to convince ourselves that our earlier expectations were just fantasies, ‘Jetsons stuff’ — that this progress is the only progress we could reasonably expect.”

There Is No ‘Party of Science’

Samuel James explains “just how useless invoking science has become in contemporary discourse. ‘Useless’ does not mean untrue, of course, it just means useless, as in: Even near-unanimous scientific consensus matters very little in practice if it runs afoul of certain shibboleths. Scientific consensus itself is becoming a slippery concept nowadays, as certain kinds of science are routinely ruled out of bounds if they produce politically undesirable data.”

The context of this article is Canadian, but it proves (as Rod Dreher has long been saying) that people who have come from totalitarian contexts are growing increasingly concerned by what they are seeing in countries like Canada and the US. “Like many other immigrants, I have first-hand knowledge of how unfinished the Enlightenment project actually remains. Where we once lived, the autonomy of scientific and philosophical inquiry is having to reassert itself over and over. Where we once lived, universalism is suspect, impossible. Where we once lived, the past remains enchanted, mythologized. It was we, as Peter Pomerantsev argues, who first lived through a post-fact, post-value, and post-hope era, which many Western countries are now experiencing.”

“If we want to know what clouds of affliction mean and what they are sent for, we must not flee away from them in fright with closed ears and bandaged eyes.” 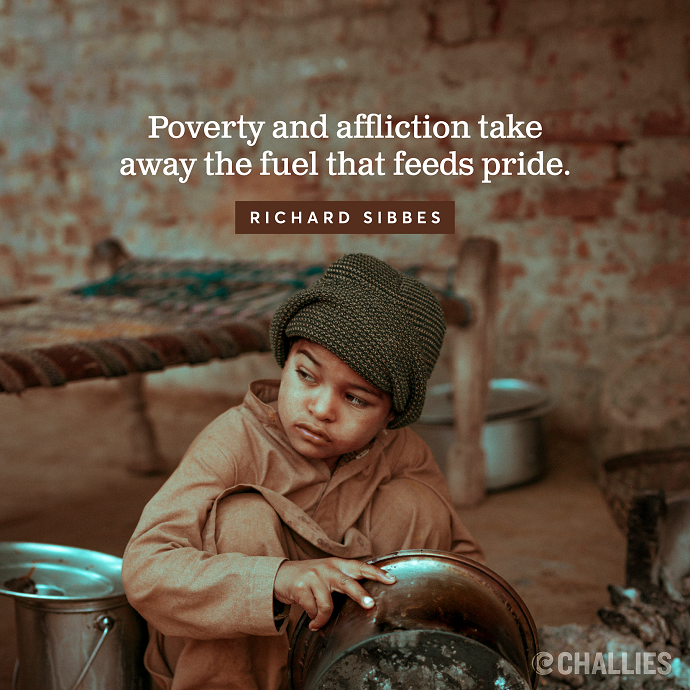 Poverty and affliction take away the fuel that feeds pride. —Richard Sibbes