Like the great majority of other families on earth, mine is learning to adjust to unexpected new realities. It has now been three weeks since we were instructed to distance ourselves from others as much as possible, and we have done our best to comply. Here’s a little update from our neck of the woods.

My son returned home after Southern Seminary had to close its doors, and he has since dutifully completed the two weeks of isolation our government demands of those who return from international destinations. The seminary made a blazingly fast transition to online learning, so his classes have continued pretty much on schedule, albeit through a screen. This week is his spring break, but he has nowhere to go and lots to do, so his life continues apace.

My daughters have been out of school since March 13 and have been told that the earliest they will return is May 4. Just this week their schools began to organize online learning and, until schools re-open or the year ends, they will have at least a couple of hours of work to complete each day. Both are set to graduate this year, one from eighth grade and the other from twelfth, but both have already learned that all year-end activities have been preemptively canceled (trips, proms, ceremonies, etc). So their lives have been radically simplified and made much “smaller.” They are finding it difficult to be separated from their friends, though they are adapting by making lots of contact via video.

Aileen and I are accustomed to being around the house a lot, since we both work in the home or from the home. Of course the great difference now is that the kids are here all the time as well. Our house is small and I don’t think any of us would deny that we are starting to feel that smallness. While we do have a tiny backyard, the weather has been cold—just a little above freezing most days—so it has not been outdoorsy weather. All parks, fields, and common areas are now closed, so the best we can do is go for walks through our neighborhood (provided, as per current regulations, we stay at least 2 meters away from anyone else).

I’ll be transparent. I find that we are all battling varying degrees of irritability and discouragement, and sometimes succumbing to them. The best I figure, I think this partly owes to being close together with nowhere to go and little to do, and also partly to the sheer uncertainty of the present and future. In the abstract, you’d think a time like this would lead to great opportunities to do fun things as a family, to explore new ideas, to take on new projects, and so on. But now that we’re into it, we all seem to be a bit listless and unmotivated. It can seem like a lot of work to organize a game of Clue or Taboo. As the dad, I’m feeling quite a lot of guilt over not spending more time doing quality things. But then it seems like no one else really wants to do those things either. It’s like we all want something to do through the long afternoons and evenings, but often can’t actually make it happen. We are trying to embrace these days, and still are in many ways—we really are having some good and meaningful times together. But it’s not as simple as I might have thought. I’m kind of disappointed in me.

Speaking of me, a month ago, my calendar was full—probably too full. I had lots of travel to do and many conferences to speak at. In the six months between March 1 and August 31, I was to make trips to Greece and Italy, then to Romania and Hungary, then to Zambia, and finally to Mozambique. I also had several events in Canada and the US. But then, not surprisingly, one after the other was canceled until now my calendar is essentially clear until the fall. I’ve even had some fall and winter events canceled. While I am disappointed that I will not be seeing those interesting places and meeting all kinds of neat people, I have found myself surprisingly content with the reality of staying put this year—a sure sign that I had over-committed.

So I continue to write most days and to post something to the blog every day (6000 days in a row as of Sunday!). I continue to chew over future projects, and am in the midst of all the media interviews related to Epic. I go for a walk early in the morning to pray, and another walk in the evening to chat with Aileen, or sometimes a run with my daughter who wanted to try a couch to 5k. I’ve also organized our neighborhood so no one will be alone and unassisted should they get sick or fear going to the store. And then, of course, I’ve continued to be involved in my church, albeit from a distance. I do miss the church dreadfully. Online services are a blessing, but they sure aren’t even close to the real thing!

I’ve put a lot of thought into what the Lord might be doing through all of this—what he might be doing in me, in my family, in my church, in my country, and in this world. I’ve seen all kinds of people offer their thoughts, but for now I think it’s far too soon to determine this with any kind of confidence. Where I do have confidence is that he’s up to something significant, something that will ultimately be for the good of his people, the strengthening of his church, and the glory of his name. I look forward to seeing what that is, but don’t feel ready to offer any conjecture about it at this point.

From my family to yours, I hope and pray you are staying safe and experiencing a great measure of God’s grace at this strange and difficult time. 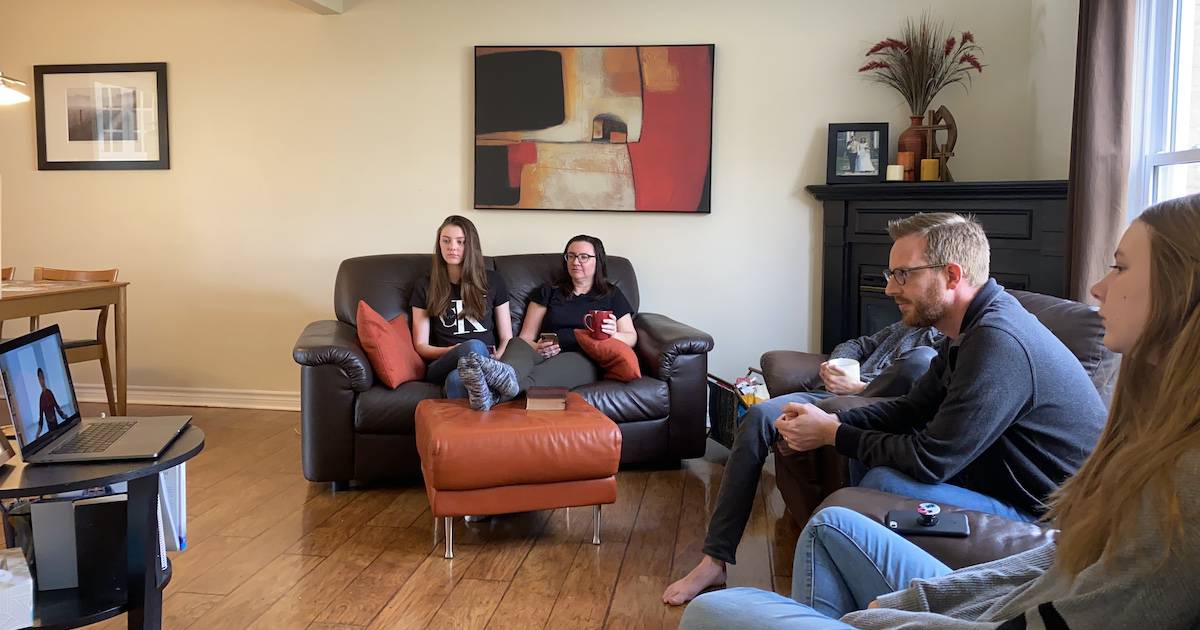 (Watching our Sunday service together)