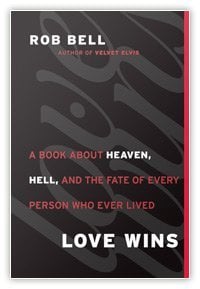 It has been almost 4 months since the release of Rob Bell’s book Love Wins. This is a book that has ignited a great debate on the subject of hell. It has also ignited discussion on the way this debate has been handled, and particularly so by those of us who considered this a dangerously unbiblical book. In the past couple of weeks I have had a lot of opportunity to think about Love Wins–about how it appeared on the scene, how we reacted, and some of the lessons we would do well to learn. Let me share a few of my thoughts on all of this.

Love Wins was published by HarperOne–a company with an excellent and well-funded marketing department. I am convinced that their marketing plan involved you and me (and let me define “you and me” as conservative and/or Reformed Christians–exactly the kind of people who tend to read this blog). They drew us in and played us perfectly so that we did exactly what they wanted us to. We reacted with horror–very vocal horror–to the book and its implications. The first hint of the book’s content, the video trailer, was carefully crafted to suggest the purpose of the book but not state it explicitly. This generated a lot of buzz not just about the book’s contents, but about what Bell may have meant in the trailer. It was a brilliant marketing move that ignited a massive amount of discussion and controversy. The first people knew of the book was that it was controversial.

Once the fire had ignited, HarperOne quickly battened down the hatches, refusing to send any more pre-release copies of the book–a very rare phenomenon. This means that until the book’s release copies of the manuscript were unusually rare. I take this to mean that the marketing plan was moving along very well and that allowing reviewers to begin writing critical reviews prior to its release date would have been detrimental to sales. A few copies of the manuscript were passed around, but most reviewers had to wait until release day. Until then all people could do was speculate. And we did.

The long and short is that the marketing plan for this book involved you and me and we played our part.

Our response to Love Wins was immediate and furious and began long before the book was released. The earliest responses were based on the video trailer and made some assumptions, which is to say that Justin Taylor’s earliest comments and John Piper’s infamous Farewell Rob Bell tweet assumed some context–that people were familiar with Bell and his steady theological decline. These were essentially insider comments–from one conservative Christian to others–that very quickly ended up going far beyond that demographic. Ripped from their context, many people took them as being self-assured and mean-spirited even though I am convinced they were done out of genuine love and concern for truth. No one guessed that they would go so far, so fast, and that they would draw such urgent and widespread response. These early responses, first Justin’s and then many others, made statements about Bell based on the hints in the trailer rather than the statements in the book. This allowed Bell’s defenders to declare that we were being unfair and too hasty. Social media did its work and soon tens of thousands and then hundreds of thousands of people were reading these comments and spreading them through their own networks; people were retweeting and liking and commenting and writing their own blog posts and everything else we do with news today.

Do not hear me criticizing John Piper or Justin Taylor or anyone else here; I think these men would be the first to say that they had no idea of what would happen and that if they had, they would have responded differently (and, in fact, Justin went back and changed his blog post in several ways).

It must also be admitted that many who responded to Love Wins did so not out of a genuine concern about the book but because the topic was generating so much buzz and we wanted a part of the web traffic or the exposure. I say this as one who has doubted my own motives since then.

In the few weeks prior to the book’s release and in the first couple of weeks following it, Love Wins was a constant topic in the Christian blogosphere and just about everywhere else Christians interacted with social media. Anyone tuned in to Christian social media knew at least the basics of the controversy.

We Sold the Book

The upshot is that our response gained the notice of the media which in turn put the book on the bestseller lists. It was the volume and fury of our response, the breadth of it, that caught the watching eye of the media. Very quickly Bell was appearing on news shows looking perplexed and wounded and every major media outlet was talking about his book and the idea it contained. Our response to the book had all the marks of a great story–Christians battling over what most people consider a vulgar, arcane doctrine. There was a hero (Bell) and a villain (the rest of us). The book sold accordingly.

It is obvious that if we had collectively ignored the book, it would not have sold nearly so well. But wait! I am not suggesting that we should have ignored it. I am simply pointing to the reality that our response generated the buzz which in turn led to sales. We were the marketing plan and we delivered results that were above and beyond all expectation.

We Stood for Truth

We did not waver. Even as the media attention increased and even as certain Christian leaders called on us to give Rob Bell time and space to explain himself, we did not waver even a little bit. We stood firm on the truth that hell exists. We stood firm on calling Bell to repent of this false doctrine and on insisting that he had stepped outside Christian orthodoxy. We refused to compromise on a doctrine that always offers us the temptation to deny it. It is a doctrine that can seem arcane and one that we all wish did not exist. I believe we honored the Lord in this. I believe that we did exactly what he calls us to do–to defend truth in the face of error, and especially in the face of error that comes from inside the visible church.

We Are Standing Firm

We are now seeing a long list of book-length responses to Love Wins hitting store shelves. Each of these books reaffirms our commitment to the doctrine of hell. This will have the happy effect of causing a lot of Christians to sharpen their understanding of this doctrine; that deepened understanding will lead them to reaffirm their commitment to it. We stood for truth and now, in the aftermath, we continue to stand with our confidence in this doctrine sharpened, refreshed and renewed. And this is a consistent pattern in church history: a person denies a particular doctrine, the church reacts by going back to the Bible, and as we combat the false doctrine, we reaffirm our commitment to truth.

Lessons We Need to Learn

I have found it interesting to think back to The Passion of the Christ. Here is a film that was marketed near perfectly; they went after a Christian audience and we bought what they were selling. In fact, we bought it in nearly unparalleled numbers. Suddenly every studio saw that Christians could be compelled not just to buy movie tickets, but to generate enough buzz that a movie could become a bona fide blockbuster. We were cheap marketing! Get to the leaders and they will sell the film to their followers. All kinds of studios have tried to recreate the buzz that caused millions to stream to The Passion of the Christ. It may be that the Love Wins marketing team caught lightning in a bottle, but we have to know that others are going to try to imitate them.

Let me suggest a few lessons we can draw from this situation: