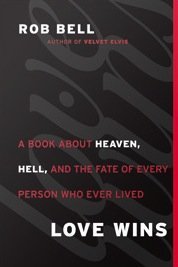 Questions matter. They can help you to grow deeper in your knowledge of the truth and your love for God—especially when you’re dealing with the harder doctrines of the Christian faith. But questions can also be used to obscure the truth. They can be used to lead away just as easily as they can be used to lead toward. Ask Eve.
Enter Rob Bell, a man who has spent much of the last seven years asking questions in his sometimes thought-provoking and often frustrating fashion. And when he’s done asking, no matter what answers he puts forward, it seems we’re only left with more questions. This trend continues in his new book, Love Wins: A Book About Heaven, Hell, and the Fate of Every Person Who Ever Lived, where Bell poses what might be his most controversial question yet:

Does a loving God really send people to hell for all eternity?

How he asks the question is just as important as the question itself. “Has God created billions of people over thousands of years only to select a few to go to heaven and everyone else to suffer forever in hell? Is this acceptable to God? How is this ‘good news’?” They say that the person who frames the debate is going to win the debate. That is especially true when the debate is framed in this way, through these particular questions. You’re damned if you do and damned if you don’t. No offense, and no pun intended.

The Toxic Subversion Of Jesus’ Message

Bell begins the book with surprising forthrightness: Jesus’ story has been hijacked by a number of different stories that Jesus has no interest in telling. “The plot has been lost, and it’s time to reclaim it.” (Preface, vi)

A staggering number of people have been taught that a select few Christians will spend forever in a peaceful, joyous place called heaven, while the rest of humanity spends forever in torment and punishment in hell with no chance for anything better…. This is misguided and toxic and ultimately subverts the contagious spread of Jesus’ message of love, peace, forgiveness, and joy that our world desperately needs to hear. (ibid)

You may want to read that again.

It really says that. And it really means what you think it means. Though it takes time for that to become clear.

Heaven Is A Place On Earth—and We Are Making It

Bell frames much of the book around time and place, around what the Bible means when it speaks of the when and where of heaven and hell. He points to Revelation 21, citing that the heavenly city, the New Jerusalem, is coming down to the new earth. He also affirms that heaven is a real place where God’s will alone is done and that at present, heaven and earth are not yet one (pp. 42-43). These are points that few Christians could seriously question.

His argument progresses to this: Because heaven will eventually come to earth, if we’re to take heaven seriously, we must take the suffering that exists in the world seriously now. Therefore, we are called to participate “now in the life of the age to come. That’s what happens when the future is dragged into the present” (p. 45). In light of this, humanity’s role within creation is redefined so that we are not so much stewards as we are God’s partners, “participating in the ongoing creation and joy of the world” (p. 180), and engaging in creating a new social order with Jesus (p. 77). This language of partnering and participating is frequently applied by Bell to causes of social justice.

But what about hell? Is hell a future reality or a present one? Is it an earthly reality or one that exists elsewhere?

Hell appears to be more about what we do to each other than what we’ve done to God. Bell reads Jesus’ warnings of divine punishment as addressing only the temporal, rather than both the temporal and the eternal. These warnings were for the religious leaders of the day, and had very little to do with some other reality or some other time, he argues (pp. 82-83). Instead, hell is “a word that refers to the big, wide, terrible evil that comes from the secrets hidden deep without our hearts all the way to the massive, society-wide collapse and chaos that comes when we fail to live in God’s world God’s way” (p. 95). There’s no fire and no wrath, at least, none that is extrinsic to us.

Does Rob Bell deny the existence of hell? He would say no. We would say yes. He affirms, but only after redefining. And that’s just a clever form of denial.

Understanding what Bell truly believes and what he is truly seeking to teach can be a battle. The reader will find himself following many rabbit trails and arriving at several dead ends. It seems that where Bell’s arguments begin to break down, he simply walks away instead of pursuing consistency and logic. This book could not stand the rigors of cross-examination. It has little cohesion, little internal strength.

Throughout the book he engages in what can best be described as exegetical gymnastics, particularly in dealing with the Greek word aion, a small word that is crucial to his arguments.

While this word is commonly translated as “eternal” or “everlasting,” Bell argues that it can also mean “age” or “period of time,” or even “intensity of experience.” Using this approach, he briefly argues from the parable of the sheep and the goats (Matt. 25:31-46) that eternal punishment isn’t eternal, but rather an intense period of pruning.

For God so loved the world that He sent His only Son so that whosoever believes in Him will not perish but have life for a period of time.

Not as encouraging, is it? While Bell might argue here that “life abundant” might be a better fit (playing on the “intensity of experience” angle and tying it to John 10:10), at the end of the day, we’re left with an approach that gives more credence to living your best life now than it does to worshipping Jesus.

The Good News Is Better Than This

Throughout the book, there are a number of points where we would agree with Bell, particularly when he identifies some of the goofy things that people have concocted to make God’s absolute sovereignty palpable. But his answers are equally unsatisfying. Even his good critiques are simply a bridge to bad conclusions.

As he makes his case, Bell seems to delight in being obtuse, creating caricatures of opposing views that lack logic and compassion. He paints himself as the victim of the hateful, toxic, venomous denizens of certain corners of the Internet that believe “the highest form of allegiance to their God is to attack, defame, and slander others who don’t articulate matters of faith as they do” (p. 185).

Thus, Rob Bell appoints himself a martyr for his cause, and anyone who disagrees with him is preemptively silenced. It’s a useful technique, that, but hardly a fair one. Meanwhile he acts as if those who hold to the belief that, in Bell’s words, “we get this life and only this life to believe in Jesus,” a view passionately held to by the vast majority of Christians throughout history, are blowing smoke rather than dealing honestly with the Scriptures. He subtly redefines the questions and answers, and in doing so, also shifts the battle lines.

As he moves those lines, he moves closer and closer to outright blasphemy. Turning on 1 Timothy 2 (where Paul states that God desires all people to be saved and to come to the knowledge of the truth) Bell reflects on a traditional (orthodox) view of hell and asks:

How great is God?
Great enough to achieve what God sets out to do,
or kind of great,
medium great,
great most of the time,
but in this,
the fate of billions of people,
not totally great.
sort of great.
a little great.

A God who would allow people to go to hell is not a great God, according to Bell, and the traditional belief that He would is “devastating . . . psychologically crushing . . . terrifying and traumatizing and unbearable” (pp. 136-7).

God is at best sort of great, a little great—great for saving some, but evil for allowing others to perish. Dangerous words, those. It is a fearful thing to ascribe evil to God.

So what of the gospel? Where is the gospel and what is the gospel? Ultimately, what Bell offers in this book is a gospel with no purpose. In his understanding of the Bible, people are essentially good, although we certainly do sin, and are completely free to choose or not choose to love God on our own terms. Even then he seems to believe that most people, given enough time and opportunity, will turn to God.

In This Is Love

If Love Wins accurately represents Bell’s views on heaven and hell (at least if our understanding of the book accurately represents his views on heaven and hell), it reveals him as a proponent of a kind of Christian Universalism. He would deny the label as he tends to deny any label. But if it looks like a duck and quacks like a duck, well, you know how it goes.

As soon as the door is opened to Muslims. Hindus, Buddhists, and Baptists from Cleveland, many Christians become very uneasy, saying that then Jesus doesn’t matter anymore, the cross is irrelevant, it doesn’t matter what you believe, and so forth.

What Jesus does is declare that he,
and he alone,
is saving everybody.

And then he leaves the door way, way open. Creating all sorts of possibilities. He is as narrow as himself and as wide as the universe.

People come to Jesus in all sorts of ways.

Sometimes people use his name;
other times they don’t.

Some people have so much baggage with regard to the name “Jesus” that when they encounter the mystery present in all of creation—grace, peace, love, acceptance, healing, forgiveness—the last thing they are inclined to name it is “Jesus.”

What we see Jesus doing again and again—in the midst of constant reminders about the seriousness of following him living like him, and trusting him—is widening the scope and expanse of his saving work.

That is what we know as universalism. And it is cause for mourning.

Christians do not need more confusion. They need clarity. They need teachers who are willing to deal honestly with what the Bible says, no matter how hard that truth is. And let’s be honest—many truths are very, very hard to swallow.

Love does win, but not the kind of love that Bell talks about in this book. The love he describes is one that is founded solely on the idea that the primary object of God’s love is man; indeed, the whole story, he writes, can be summed up in these words: “For God so loved the world.” But this doesn’t hold a candle to the altogether amazing love of God as actually shown in the Bible. The God who “shows His love for us in that while we were still sinners, Christ died for us” (Rom. 5:8), who acts on our behalf not so much because His love for us is great, but because He is great (Isaiah 48:9, Ezekiel 20:9,14,22,44, 36:22; John 17:1-5).

This review was co-written with my friend Aaron Armstrong who writes at Blogging Theologically. All quotes are taken from an Advance Reading Copy of the manuscript that was provided specifically for review purposes; they will be verified against a final bound copy of Love Wins following the book’s release.