Taking God at His Word.

Do you remember that amazing miracle of Jesus where he brought life to Lazarus? I’m sure you must remember it. Lazarus was sitting in his home along with his sisters Mary and Martha. He was chewing on some bread and cheese as an afternoon snack when, from outside the door of the house he heard a bit of a commotion as if a crowd was quickly approaching. There was mourning and weeping. And suddenly a voice boomed “Lazarus, come forth!” He licked his fingers clean and walked out the door where he saw that his good friend Jesus was standing there along with His disciples. Everyone gasped in amazement as Lazarus walked out into the bright sunshine.

That’s absurd, I know. It didn’t go like that at all. In the biblical narrative Lazarus wasn’t sitting in his house but was dead in a tomb. He wasn’t eating a snack but was rotting and decaying. Lazarus was dead and was brought to life. If it was any other way it would not have been much of a miracle. It doesn’t take any special power to bring life to the living. Jesus would not have been a great miracle worker if He simply gave life to those who already had it.

But this is a claim I see far too often–that people can bring life to the living.

One of the dubious perks of being a reviewer is that I receive all kinds of marketing material for various products. Just recently I received a copy of the marketing package for the new Word of Promise New Testament audio Bible produced by Thomas Nelson. It is a recording of the New King James translation of the Bible that is performed by a talented and well-known cast of characters. It boasts Jim Caviezel as Jesus, Richard Dreyfuss as the voice of Moses (in New Testament quotes), Stacy Keach as Paul, Marisa Tomei as Mary Magdalene, Luke Perry as Judas and Stephen, and so on. Slightly dramatized and complete with a soundtrack and various sound effects, it is something of a throwback to the days before television–the days when radio dramas were all the rage. All-in-all it seems like a decent enough production, though I listened only to the few sample clips that were provided.

But there’s one thing about it that really bothers me. 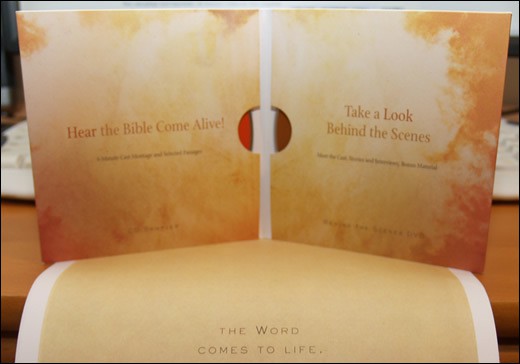 The cover page for the brochure says this, and only this: “The Word Comes to Life.” On the inside of the CD case are these words: “Hear the Bible Come Alive!” Interestingly, a similar product and one I reviewed a short time ago, The Bible Experience, makes a similar claim: “Hear the words of the Bible brought to life like never before. Inspired By…The Bible Experience: New Testament Audio CD is a fully-dramatized reading of the Bible performed by an unprecedented ensemble of distinguished African-American actors, musicians, and personalities.” And as I pause to think about it, I realize I’ve lost track of the number of products that claim to bring the Bible to life or to make its words alive.

I object. Every Christian ought to familiarize himself with the incredible words of Hebrew 4:12 which read, “For the word of God is living and active, sharper than any two-edged sword, piercing to the division of soul and of spirit, of joints and of marrow, and discerning the thoughts and intentions of the heart.” The Word, it seems, is already alive. And like the living Lazarus, it has no need for us to breathe life into it. That is no cause for boasting; no cause for acclaim; no headline for marketing materials. The Bible is alive. We can’t make it more so.

Now I’m no dummy and will admit that I know what the marketing people mean when they say they will bring the Bible to life. I make no objection to people trying to inject some emphasis and drama into the biblical text. Just yesterday our pastor’s assistant preached about Jesus’ crucifixion and clearly invested a lot of effort in reading the biblical text in a dramatic way. A drab, monotone, unenthusiastic reading can certainly seem to rob the text of its life or vitality. I believe it is right and good when the text is read in a way that emphasizes what ought to be emphasized. But we need to be careful how we speak of such things. We need to show a little bit of theological precision lest we inadvertently cause people to doubt that the Bible has life of its own and that we somehow need to inject it with excitement in order to give it vitality.

If we claim that a dramatization of the Bible brings life to it, we tacitly suggest that Joe Christian, reading the Bible in the morning before heading to work, is somehow reading it in a way that is less living, less powerful than when Marisa Tomei and Jim Caviezel read it superimposed over a professionally-produced soundtrack. By emphasizing the life-giving nature of dramatization, we necessarily de-emphasize the Bible’s own qualities; we de-emphasize the Bible’s power of having and giving life.

After all, the Word does not gain its power or efficacy from the way it is read or through dramatization. Rather, the Bible has innate power–power given it simply by virtue of its authorship. Because the living God has given us the Word, it has power and life of its own. In that way it is absolutely unique; there is nothing else like it. We can bring other words to life; we can bring the plays of William Shakespeare to life; we can bring history to life; we can bring other cultures to life; but we cannot bring the Bible to life. Nor should we even attempt to do so. The Bible is already alive. It is living and active and powerful. It is sharper than any two-edged sword. It has life of its own.