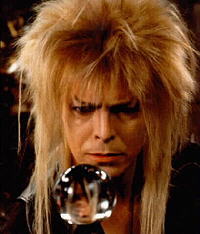 When I hear the word “labyrinth” I immediately think of that awful movie from the 80’s starring David Bowie. If you grew up in the 80’s I’m sure you remember it – the one that launched that career of Jennifer Connelly and brought so much pleasure to so many young girls (it seems the girls liked the movie more than the boys).

Of course, and unfortunately, labyrinth also has a religious connotation, as it describes an ancient but recurring technique of supposedly experiencing God. Many ancient cathedrals had labyrinths built into their floors and going through this labyrinth while meditating on the proper things at the proper time was supposed to bring great spiritual enlightenment. And since these bad habits of the past seem to continue to haunt the church of the present, the labyrinth is finding new life. I wish I could say it was held to only the lunatic fringe, but it is gaining popularity even in evangelical circles.

A version of the labyrinth is currently being sold by Group Publishing. Other versions are available. To catch a glimpse of what the labyrinth offers, you can check out Youth for Christ’s site and take a few minutes to go through their exceptionally-poorly designed Flash labyrinth. They recommend you take off your shoes (I suppose the labyrinth must be holy ground) and allow yourself 40 minutes. While you go through you will be serenaded with new age music and slow, deliberate narrative. Don’t be fooled by the Bible quotes in the first station – you won’t hear much more Scripture on your journey. Instead you will hear things like:

You are out in space
Floating, weightless, calm and secure
Seeing things clearer than ever before

From here there are no visible countries
It’s not like a map or a globe
There are no lines for territories
No colours to mark out countries, historical separations, human definitions…
Just rock, sea, forest and desert
Evolving, eroding, reforming, colliding

Life, death, birth, turning –
Movements and currents
Massive and caught up in the energy of creation

You are out in space
Breathless and patient
Awe-struck and motionless in front of this big, blue, bright ball
This great glittering, god-filled gift
This unbounded blessing you can only call
Home

In the palm of your hand you hold a small seed

You plant the seed in some soil

As you do so, feel the moist earthiness of the soil

As you plant the seed you are participating in one of the greatest mysteries of the cosmos –
you are co-creating with God. Together you give birth to life.

As the seed grows and flowers it is a symbol of your love and care of nature, creation, of the planet, of home.

Profound, isn’t it? Through that experience I was able to plant a seed and participate in one of the greatest mysteries of the cosmos – creating heresies with God. Together we gave birth to utter, complete, unadulterated nonsense. And I guess I am supposed to feel better for it.

If you are uncomfortable listening to the ongoing music and narrative, you can go to this site and read the narrative free from any new age droanings in the background. It is shocking. It bears a much closer resemblance to the religions of the East than the teachings of the Bible. Listen to this: “Mary was also given a challenge. She was asked to carry The Word, the pulse of the cosmos within her. She literally carried God into the world. Mary said yes and changed the course of history – took a gamble on the divine, flouted the odds.” Strangely, I don’t remember Mary being given a choice. Did God offer her a deal and ask that she ponder it for a while? No, He told her that she would be found with child and that was that. Sure she submitted to God’s will and showed a great display of faith, but her “yes” did nothing to change the course of history! Is Jesus the pulse of the cosmos? What is this nonsense?

The labyrinth is described as a place of “meditative prayer” and “contemplative prayer” – two concepts that have been largely absent from Protestantism until recent days when the teaching of Catholic mystics like Nouwen and Manning have found wide acceptance by evangelicals. Today such concepts, which might involve chanting a single word for 20 minutes or deliberately turning off one’s mind, are considering effective ways of deepening one’s walk with Christ – or at least appealing to those who have no use for the church.

It is tragic, isn’t it? When did the Bible stop being enough? Why are believers turning away from the Word, and turning instead towards mysticism and attempts to know and experience God apart from His complete revelation of Himself. And when did we lose sight of the preaching of the gospel as they way to reach the lost? Throughout history people have rejected God and rejected our best efforts to convince them to accept Him. Changing our methods to more closely mimic the world’s will do nothing to change the fact that the number of those who hate God will always outnumber those who love Him.

Avoid the labyrinth and any other method that might seek to convince you that you can know and experience God apart from His Word. Immerse yourself in the Word and God will speak to you with clarity, conviction and power!