Yesterday Kenneth Keathley, a professor at Southeastern Baptist Theological Seminary, described on his blog how Ken Ham of Answers in Genesis has changed his position on one key element of evolution (see “Ken Ham Embraces Evolution“). He pointed to an article in the latest issue of Answers magazine, a publication of Answers in Genesis, and said, “The article is noteworthy because it argues for macro-evolution; the theory that the species of today evolved from prior, extinct species.” If true, this is indeed a substantial and noteworthy shift. Not surprisingly, Dr. Keathley’s blog post was soon distributed through social media where some people reacted with more than a little surprise. But I don’t think Ken Ham or his organization have actually embraced evolution of the kind Keathley describes.

Keathley’s main point is the claim that young-earth creationists, Ken Ham foremost among them, are now embracing what he describes as macro-evolution. Looking at the Answers article and citing both a paper delivered at ETS and a book published by an Answers in Genesis geologist, Keathley says, “In their academic and scholarly writings, members of Answers in Genesis have started to accept the notion that species evolve into other species. … They are acknowledging that, indeed, the fossil record does in fact give evidence of transitional life forms. They seem to be trying to go where the evidence leads them and at the same time continue to hold to their core beliefs.”

But I don’t think the evidence Dr. Keathley offers backs up his claim. If I understand correctly, what he describes is “speciation,” “the formation of new and distinct species in the course of evolution.” But there is no controversy here. Young-earth creationists have embraced speciation—within defined limits, mind you—almost as long as young-earth creation has been a movement. Henry Morris was referencing it as far back as 1961 in The Genesis Flood and he himself was drawing on the work of his precedessors. Young-earth creationists have been articulating their understanding of limited speciation from science and from Scripture for a long time. So, too, have Ken Ham and Answers in Genesis.

You see, young-earth creationists believe that God created “kinds” of living things, taking their cue from the repeated use of “kind” in Genesis 1—God created plants and animals “each according to its kind.” But what is a “kind?” The answer to that question makes a world of difference. To answer it you will need to think back to science class and the classification or taxonomy of living things. Living things are classified in groupings that get progressively more numerous, beginning with kingdom and ending with species. You probably remember the 7 headings:

There are five or six kingdoms, each of which describes one of the classifications of living organisms—the animal kingdom, plant kingdom, and so on. If we look within the animal kingdom, we will find approximately 35 phyla, each of which is comprised of a number of classes. They, in turn, are comprised of a number of orders. And so it goes until we arrive at the innumerable species. Young-earth creationists do not “reject the majority of classifications by evolutionary biologists but [rather, reject] the evolutionary history associated with the classifications…”1

When a young-earth creationist speaks of the “kinds” that God created, which of these 7 classifications does it best match up with? Typically, young-earth creationists have answered that “kinds” approximate “family.” Therefore, God created animals each according to their “family,” the fifth level of the taxonomy. So, for example, all cats—pets, lions, and leopards—belong to the same biological family. Hence, according to this model, God created a cat prototype in Genesis 1, and Noah would have taken two of these cat-family creatures on board the Ark. From those two cats have descended (or “speciated”) the more than 30 species of cats alive today. This is sometimes referred to as micro-evolution, or evolution within a particular family, genus, or species.

Instead of using an evolutionary “tree of life” model which shows all of life descending from a common ancestor, many young-earth creationists prefer an orchard illustration of the kind Ken Ham used in his debate with Bill Nye: 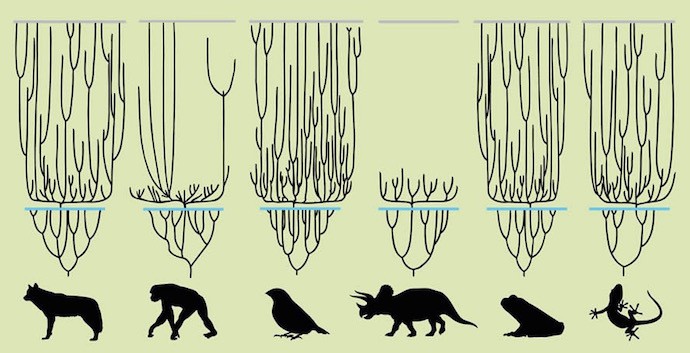 This orchard model shows that there are many descendants from each kind, some that have survived and many that have not, and that there is no overlap between the kinds. In this way the dog kind is unrelated to the lizard and bird kinds; they share no common ancestry. “While new species have been observed to arise, it is always within the limits of the created kinds.”1 (Note that the orchard diagram also uses the blue line for the flood to display an increase in speciation after that event.)

What young-earth creationists deny is that speciation has occurred at the levels of order, class, phylum, or kingdom. One order of animals cannot change into another order of animals; animals and plants do not share a common ancestor. In other words, unless I am misunderstanding something, the article Keathley cites is really only saying what young-earth creationists have said all along—that micro-evolution does occur and that it occurs at and below the level of family. If that is the case, neither Ken Ham nor the organization he founded have changed what they believe. Ken Ham has not embraced evolution.