There are times when a kind of weirdness settles over evangelicalism, when for a while people are swept away by strange and flawed ideas. This usually happens when Christians are attempting to counter ideas that are prevalent outside the church. Instead of reacting in a measured way, we collectively over-react. I think the purity and courtship movements were two examples—or perhaps one example, since they were so closely aligned. You can hardly remember or evaluate either without raising the name Josh Harris. Though he did not found these movements and though he was not their lone voice, he was certainly among their foremost popularizers. The homeschooled wunderkind who first made a bang with his New Attitude magazine, triggered a full-out explosion with his 1997 debut book, I Kissed Dating Goodbye. It went on to sell over a million copies and to impact countless lives and relationships. 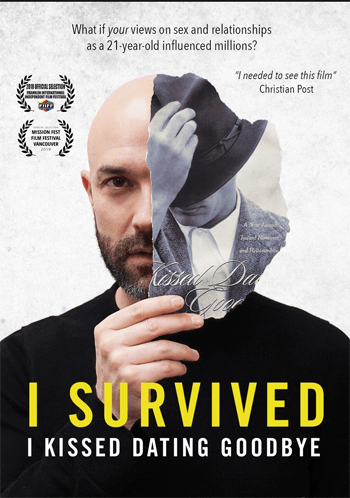 But twenty years have passed and a lot has changed since then. Josh got married, began a family, pastored a megachurch, endured some gruelling trials, moved to Vancouver, and pursued graduate studies. And along the way he began to re-evaluate I Kissed Dating Goodbye and its two sequels. He began to grow concerned that his book, though well-intentioned, had caused as much harm as good. He began to wonder if what he espoused there was wise and, of even greater concern, biblical. He mapped out a journey or project in which he would listen to people who had been impacted by his work to learn how it had influenced them. He tells about it in the new documentary (available free online) titled I Survived I Kissed Dating Goodbye.

He begins by describing some of the recent blowback against the book—mostly people taking advantage of social media to describe how it had negatively impacted them. He sets up Skype calls with a whole list of people to hear their concerns and gather information about how they had benefited or suffered because of his books and the wider purity and courtship movements. And then he sets out on a journey around North America to speak to a variety of people who were damaged by his book and had spoken against it. There are lots of stories to be told and lots of critiques to be offered. What does he conclude along the way? “I think that its premise is flawed. I don’t agree with a lot of my own book.” The film ends with him offering an apology to anyone who was in any way damaged by it.

Some of his conclusions are interesting, though, in retrospect, kind of obvious. The book subtly elevated marriage as an ideal state and singleness as something unfortunate and undesirable—a temporary state God meant to resolve. In fact, the purity and courtship movements were almost a kind of prosperity gospel that, instead of promising fulfillment through financial riches, held out the promise of sex and marriage to those who rigidly followed God’s will. They also spoke of purity as a binary state that depended entirely on virginity. Virgins were pure and those who had lost their virginity (or had it stolen from them) were impure. And who would want to marry an impure person? The old enemy legalism—salvation or sanctification by manmade rules—was not far behind. In this case, courtship was elevated as the mark of godly people while dating was denounced as the mark of ungodly or apathetic people. A specific form of relationship on which the Bible is silent became a defining characteristic of Christian obedience and maturity. Trouble necessarily followed.

I think I was just a little too old and just a little too far outside the evangelical mainstream to be significantly impacted by I Kissed Dating Goodbye. When it came out I was already deeply involved in a [dating] relationship with Aileen. But I do remember thinking this: Who on earth lets a twenty-one-year-old write the book on dating and courtship? Who allows someone that young to be an authority on something so important? Though I always had problems with the book, I never had a beef with Josh. I had a beef with the masses of Christians who would blindly accept it and with the Christian celebrity machine that elevated someone so young to a position of such authority. No, authority does not come through experience. But even Harris admits that he was a young man who believed far too much in his own abilities, just like every other twenty-one-year-old out there. In the film he says that when he was that age he was sure he had all the answers. But now, in his early forties, he knows that he didn’t then and still doesn’t today.

Almost everyone who writes a book regrets at least something they said in it. There aren’t many authors who look back at their books ten or twenty years on and don’t wish they could change at least a few chapters or paragraphs. But there are few who go so far as to later disagree with their sum and substance and to pull them from the market altogether. Harris is one of the few who has done so, and I think this was a wise decision. It’s not like everything in his books was wrong and not like some people didn’t genuinely benefit from them. But they have provoked too many people to make mountains out of molehills and molehills out of mountains. If the author can no longer in good conscience stand behind his books, it’s wise and right to apologize and to let them fade into history.

The dating and courtship movements represented a weird phase in evangelicalism and, as they finally fade, I think we are in a position to speak in much healthier and much more biblical ways about sexuality, about purity, about marriage, and about relationships. This time, let’s try to do so with wisdom, balance, and discernment instead of those radical extremes that simply lead to more error.