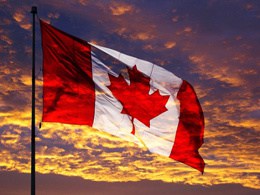 Today is Canada Day and I, like just about every other Canadian, am taking the day off from work. But it does give me a good opportunity to add a new article to the “It’s a Fact, Eh?” article archives.

Every year on July 1, Canada pauses for one day to focus on our nation. Though often compared to America’s Independence Day, Canada Day celebrates something quite different. The day marks the anniversary of the joining of the British colonies of Nova Scotia, New Brunswick, and the Province of Canada into a federation of four provinces. At this time what had previously been the Province of Canada was divided into Ontario and Quebec. This all happened on July 1, 1867. However, even at this time Canada did not become entirely independent and it was not until 1982 that Canada fully and finally severed political ties with Great Britain.

Though Canada Day (or Dominion Day as it was known then) was first instituted in the 1860’s there is no record of any substantial celebrations being held at that time. The Canadian citizens still considered themselves British and saw little reason to mark the occasion. In fact, the day really only became an important national holiday in the middle of the twentieth century. The centennial celebrations in 1967 really kicked off the tradition of marking the day in a special way. This year marks the 141st anniversary of Confederation and also the 400th anniversary of the founding of Quebec City, which also marks the founding of Canada. It is a good day to celebrate Canada.

Today many Canadians will mark the day by attending public events or celebrations—parades, festivals and the like. Most towns will hold public fireworks displays when night falls (around 10 PM in this area). The “official” ceremonies will be held on Parliament Hill on Ottawa and this is where our Prime Minister will make his Canada Day appearance. The province of British Columbia is celebrating in a very strange way by instituting a carbon tax that will raise the already-high gas prices by 2.4 cents per litre (10 cents per gallon) this year, rising to almost 8 cents per litre by 2012. Personally I prefer our plans, which involve heading to a local park and watching the kids have fun in the splash pad over there. Then we’ll probably enjoy lunch at McDonald’s (well, the kids will enjoy it) and head on home for a quiet afternoon. Because the fireworks are so late and because my girls are absolutely terrified of them, we’re unlikely to take in any of the local shows. We’ll have to wait until the kids are a little older before we do that. And, of course, we’ll pause to celebrate one of the greatest things about being Canadian—we’re not American.