Mark Zuckerberg, founder of Facebook, recently shared a picture of himself celebrating a milestone: Instagram now has five hundred million active users each month. There was Zuckerberg in his office holding an Instagram-like frame in front of himself. The picture would have been unremarkable and quickly forgotten but for this: Astute observers noticed that his laptop was on the desk behind him and that he had placed tape over the camera and the microphone. Those are small but significant details.

3 things about this photo of Zuck:

There was a time, and it was not so long ago, when we laughed at people who said things like, “The government can control your computer” or “the government can tap into your webcam.” Then Edward Snowden proved that this is actually being done. The unnerving reality is that governmental bodies and skillful hackers actually do have the ability to turn on your webcam without your knowledge and without triggering the indicator light. They actually do have the ability to turn on the microphone and listen in without your knowledge. Conspiracy theory has given way to reality. Mark Zuckerberg would make an especially high-profile target for hackers and for that reason has taken basic but effective measures to protect himself. 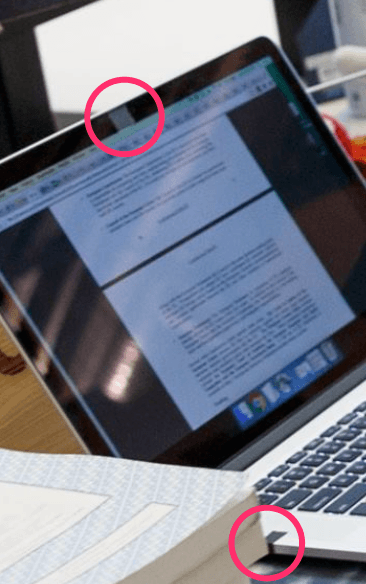 While I try to avoid operating by fear and fringe, I’m not convinced that he is over-reacting. I’m not convinced that his response is irrational or alarmist even for those of us with much less to lose. There are some things every one of us can and ought to do to protect ourselves in this digital world. But my foremost concern is for Christian leaders—from pastors with a voice to their community to denominational figures with a voice to their nation. There are some measures such people should at least consider as a means of protecting themselves, their ministries, and the gospel. Here are a few of them.

The most simple and obvious measures of protection are using good passwords and two-factor authentication. Rather than repeat myself, I’ll direct you to an article I’ve written about this very thing: 5 Things You Must Do to Protect Yourself Online. That article explains how to create a great password and why it is so important (and so simple!) to activate two-factor authentication. Seriously, do these things. Lock down your services and lock down your devices.

Before we talk about technological solutions, let’s talk about character. We tend to believe that problems created by technology can best be addressed by more technology. As we discuss things we can do to protect ourselves from electronic snooping and data gathering, our tendency will be to look for software and devices that can help us. That’s a good idea, but it comes second in order of priority. First we need to understand that the first and most important measure of protection is to avoid whatever is sinful. Having nothing to hide is the absolute best protection for yourself and your ministry. Think honestly about what you do, access, and search for online. If there are unwise patterns or inappropriate habits, take action against those things today. Don’t leave sin unaddressed.

Our devices and services leave behind a constant trail of data. Your email, your web browser, your mobile phone, your social networks, your accountability software—they generate lists of sites you have visited, locations you have been, searches you have made, and so much more. This data could prove devastating if it falls into the wrong hands. This is true even if you live by very high moral standards. Just think of the searches you have made to address medical concerns or the pictures that have popped up even when you haven’t wanted to see them. All of this exists in your data trail. Many Christian leaders would have their ministries seriously compromised if such data were to become public.

(Note: Google CEO Eric Schmidt is among others who has made the argument that the best protection is having nothing to hide. I agree as it pertains to the individual. But as it pertains to those who offer services, they need to take every possible measure to protect our data, knowing that even completely moral things can bring great embarrassment or be terribly misinterpreted.)

Finally, some people may need to consider the Zuckerberg approach. For most people in most situations there is probably no good reason to cover your webcam and microphone. If the computer sits in your office facing a wall and if your conversations are non-confidential, there is not much to gain or lose. But consider the computer that sits in your bedroom with a camera facing the bed. Knowing what you know, might it be a good idea to cover it up? Perhaps so. Even while it’s very unlikely that anyone will ever access it, there is still some measure of risk. If you keep your phone on a bedside table, at least angle the camera away from your bed. For leaders who have a particularly high profile, I would think even more carefully about such precautions in your home and workplace. Be wise as serpents and innocent as doves (Matthew 10:16). Do a bit of research online and see what the experts are saying.

The thing is, we really don’t know who is collecting information about us and what they are doing with it. But we do know that bodies like the NSA are collecting massive amounts of it and storing it all away. If they are, so too are others who may have even more dangerous designs. Though your data may not be used against you today and though it may not come to light tomorrow, it is still there. In an age of ubiquitous data collection, there is wisdom in taking some basic measures of self-protection and self-preservation. I saw many articles from tech-savvy writers remarking on Zuckerberg’s laptop; I didn’t see one that was mocking him or accusing him of over-reacting.