On Wednesday evening I was coaching first base when, from behind me, I overheard a chat between two of the parents from other team. “That first baseman was so nice. He would tell our guys, ‘Nice hit!’ even though he is on the other team. What a nice boy!” With just a bit of pride I smiled, knowing they weren’t talking about just any first baseman; they were talking about my boy.

It was a bit of a tough season for Nick. It started off well enough, with him collecting a few hits over his first couple of games. This year his team was facing a pitching machine flinging the balls at 40 miles per hour. It was a big adjustment from the year before when the boys saw nothing more than soft tosses from their own coaches. But once they made the adjustment, they began to hit well. I worked hard, with the other coaches, to help them work on their swings and by the end of the season we saw some remarkable progress. But Nick struggled. Around the mid-point of the season our team was playing the Red Sox when one of their players, a friend of Nick’s from school, was hit by an errant pitch (though, honestly, the machine threw it straight—it was the kid who stepped in front of the plate and hence in front of the pitch). There was no great damage done to the boy, but something clicked in Nick’s mind and he determined that the machine was out to get him. For the rest of the season he struggled to hit, subconsciously stepping away from every pitch, obviously worried that he would be hit as well. He collected a few hits through the rest of the season but mostly he flailed away, striking out time and again.

We prayed with him a lot. We assured him that God cares even for things as silly as little league baseball. We did not want him to become too discouraged with striking out and prayed that God would let him hit, at least occasionally. Nick is an above average fielder and loves playing defense. He often wished that his team could have a designated fielder just like American League teams have a designated hitter. But if he wanted to play, he would have to bat. And so he did, facing that machine three or four times every game. Mostly he struck out.

If Nick became discouraged, he did not often let it show. The boys on the team would occasionally tease him about his inability to hit, but he would brave it out. He was the boy on the team with the best head for the game and he was the one with the most enthusiasm. While his teammates were goofing off behind the bench, Nick was cheering for the one at bat and the one or two on base. When the boys came off the field after striking out, Nick would give them a high five and tell them, “Nice try!” He cheered the loudest and the longest. But still he struck out.

With only a couple of weeks left in the season, the head coach announced that he was going to hand out three team awards. He wanted the boys to vote for one another to decide who would win the award for the Most Valuable Player, the Most Improved and the Most Sportsmanlike. He gave no stipulations—just that the boys could not vote for themselves and that they had to realize that these awards meant a lot because they came not from the coaches or the parents but from the boys themselves.

Wednesday’s game was a tough one. It was the last game of the season and one we would need to win to have any hope at all of making the playoffs. Even then it was a long shot. The boys played well but faded at the end, unable to hold off a stronger offense. Twice Aileen heard boys on our team making fun of Nick, laughing at him or calling him names for his inability to hit. Twice Nick choked back tears and put a brave face on, continuing to cheer for his teammates.

At the end of the game, a loss, the coach handed out the awards. The MVP went to the obvious candidate—a boy who was our best hitter and among our most skilled fielders. The Most Improved went to a boy who had a lot of trouble throwing and catching at the beginning of the season but, who by the end, was hitting regularly, making solid contact; his fielding had improved significantly as well. And then it came time for the Most Sportsmanlike award. I’m not one of those parents who values sportsmanship above all else; I don’t adhere fully to the “as long as we all have fun” philosophy. I figure that if we are going to play sports, we ought to try our hardest and do our best. If I held to the “as long as we all have fun” philosophy in web design, I would not run a successful business! When Nick plays baseball, I expect that he will give it his best effort. Yet sportsmanship matters. It is the award that reflects character more than skill. And as a Christian parent, I value character much more highly than skill. 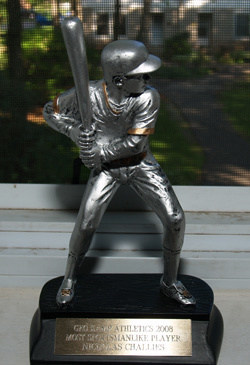 Sure enough, when the coach announced the winner, he announced Nick’s name. Taunting comments were forgotten, at least for a few minutes, as Nick accepted his trophy and accepted applause from his team, his coaches, and the parents. Though his teammates may have made fun of him at times, they had to acknowledge his love for the game, his loyalty to his team, and his character. As we walked off the field and headed home, Aileen and I told him how proud we were. We told him that we would much rather have a son who shows character—who stands brave in the face of trials and who is encouraging to his friends—than a kid who can hit the ball all over the diamond (though we wouldn’t complain if he could do both!).

It was a tough year for my boy, but a good one in which he showed a lot of growth. As Aileen said afterward, Nick is learning a skill, and that is being encouraging teammate with a good attitude and strong character. And really, that is going to get him a lot further in life than hitting a baseball out of the park. Of course this won’t keep us from spending some time in the batting cages during the off-season…