I do believe that today’s entry in this series I’ve called “The Bestsellers” will be the final one for a time. “The Bestsellers,” as you know, takes a brief look at Christian books that have sold at least 1 million copies. I have now written about the majority of the books that fit the criteria and intend to circle back as more titles make the list. But before this hiatus, I want to provide an overview of one of the books that is conspicuous by its absence. After all, it is one of the very few that has exceeded not just 1 million copies sold, but 10 million (a feat matched by only 6 others, all of which I’ve covered in this series: The Purpose Driven Life, The Prayer of Jabez, The Shack, Heaven Is For Real, Jesus Calling, and The Five Love Languages). It is Josh McDowell’s apologetic classic More Than a Carpenter.

More Than a Carpenter by Josh McDowell

Joslin McDowell was born in Union City, Michigan in 1939. He had a turbulent, traumatic, and abusive childhood and departed for college a convinced agnostic. However, he was soon challenged with Christianity’s claims and, as he examined them, became convinced of the reliability and truthfulness of the Christian faith. He professed faith in Jesus Christ. While he had planned to go to law school, his conversion reoriented his life, and he attended Wheaton College and then Talbot Theological Seminary, finishing with a Master of Divinity degree. 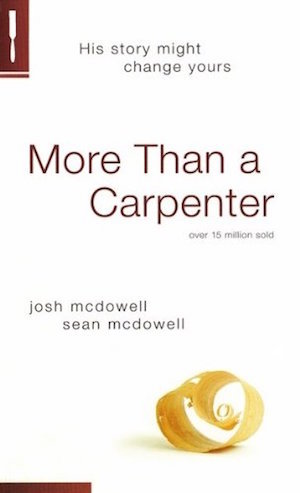 In 1961 McDowell joined the Campus Crusade team but soon began his own Josh McDowell Ministry as a ministry under Campus Crusade. Before long he was traveling the world as an apologist, speaking primarily to college students. In 1972 he published his first book Evidence that Demands a Verdict (which would sell over 1 million copies and which Christianity Today would later place 13th in their list of “The Top 50 Books That Have Shaped Evangelicals.”). In it he made a case for the Christian faith by accumulating evidence based on manuscripts, fulfillment of prophecy, evidence of the resurrection, and so on. He followed it in 1977 with More Than A Carpenter.

Part biography and part apologetic, More Than a Carpenter begins and ends with McDowell’s own story of going from skepticism to faith. The table of contents lays out his evangelistic technique while also displaying a classically modern approach to addressing questions of the faith: 1) My Story 2) What Makes Jesus So Different? 3) Lord, Liar, or Lunatic? 4) What About Science? 5) Are the Bible Records Reliable? 6) Who Would Die For a Lie? 7) What Good Is a Dead Messiah? 8) Did You Hear What Happened to Saul? 9) Can You Keep a Good Man Down? 10) Will the Real Messiah Please Stand Up? 11) Isn’t There Some Other Way? 12) He Changed My Life. The book is short at just 128 pages and carefully prepared to appeal to a wide and general audience. It is just the kind of book many Christians eagerly handed their skeptical or unbelieving friends in the hope they would read it and be convinced.

Like Evidence That Demands a Verdict before it, More Than a Carpenter, was an immediate and long-lasting success. Unfortunately, its release predates the time when the Evangelical Christian Publishers Association was maintaining records, so all I have learned about sales is that in 2013 it was awarded the Diamond Book Award for exceeding 10 million copies sold. The cover of the most recent (third) edition says it has now sold more than 15 million copies while McDowell’s website claims that 30 million copies have been distributed. I take that to mean that many copies have been given away freely.

More Than a Carpenter is a classically modernist approach to apologetics and it is clear that it played a significant role in its time. Many people were persuaded by its arguments and count the book as one of the reasons they professed faith in Christ. It raised McDowell’s status in the Christian world and gave him the opportunity to travel widely and speak to millions, pleading with them to answer the simple question, “Who is Jesus?” In its success it played a key role in popularizing what is known as the “classical” or “evidentialist” approach to apologetics. It was also just the kind of work that postmodern Christians and opponents of Christianity loved to hate, mocking it for laying out so straightforward a path from evidence to profession.

The book underwent a significant revision in 2009 when, joined by his son Sean, McDowell updated some content to reflect questions raised by the New Atheists. It currently has 540 reviews on Amazon where it averages 4.5 stars.

McDowell continues to write and continues to focus on apologetics as indicated by the titles of some of his most recent works: Evidence for the Resurrection (2009), The Unshakable Truth (2010), and Evidence for the Historical Jesus (2011). Sean, also a graduate of Talbot and later of the Southern Baptist Theological Seminary, appears to be following in his father’s footsteps in many ways and has joined him in several key writing projects.

I first encountered McDowell through Christian music. In the 80s and 90s he was often associated with Christian acts, sometimes traveling with them to deliver a mid-concert devotional. His Why Wait? campaign (based on his 1987 book by the same title) was popularized by his association with a selection of Christian bands. In this video, for example, he introduces a song by Petra (always and forever my favorite band of the era):

At least in my life, that was how I encountered him and how I still know him—as the guy in the sweater who gets to hang out with the greatest Christian bands in the greatest (or was it the worst?) era of Christian music.