A short time ago I launched a new series called “The Bestsellers.” The Evangelical Christian Publishers Association tracks sales of Christian books, and awards the Platinum Book Award for books whose sales exceed one million, and the Diamond Book Award for sales exceeding ten million. In this series I am looking at the history and impact of some of the Christian books that have sold more than a million copies—no small feat when the average Christian books sells only a few thousand. We will encounter books by a cast of characters ranging from Joshua Harris, Randy Alcorn and David Platt all the way to Joel Osteen, Bruce Wilkinson and William Young. Today we look at a surprise bestseller that is one of the very few to have sold more than ten million copies.

The Prayer of Jabez by Bruce Wilkinson 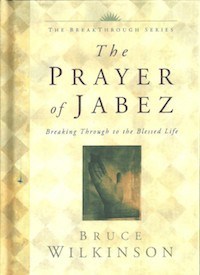 Bruce Wilkinson earned advanced theological degrees at several Christian seminaries and for a time served as a professor at Multnomah Bible College in Portland, Oregon. In 1976 he began Walk Thru the Bible, a worldwide ministry that provides seminars and conferences to teach biblical doctrine. He remained at the helm from 1976 until 2003 when he was succeeded by Chip Ingram.

In 2000 Wilkinson teamed up with Multnomah Publishers to release The Prayer of Jabez : Breaking Through to the Blessed Life and almost from the moment of release, it left an indelible mark on Christian publishing. The book is based on two verses from 1 Chronicles 4: “Jabez was more honorable than his brothers; and his mother called his name Jabez, saying, ‘Because I bore him in pain.’ Jabez called upon the God of Israel, saying, ‘Oh that you would bless me and enlarge my border, and that your hand might be with me, and that you would keep me from harm so that it might not bring me pain!’ And God granted what he asked.”

In the introduction Wilkinson says, “I want to teach you how to pray a daring prayer that God always answers. It is brief—only one sentence with four parts—and tucked away in the Bible, but I believe it contains they key to a life of extraordinary favor with God. This petition has radically changed what I expect from God and what I experience every day by His power.” The first chapter begins with these words: “The little book you’re holding is about what happens when ordinary Christians decide to reach for an extraordinary life—which, as it turns out, is exactly the kind God promises.” Moving to biography, he tells how thirty years earlier he had discovered that small prayer spoken to Jabez and had prayed it on a daily basis ever since. “In the pages of this little book, I want to introduce you to the amazing truths in Jabez’s prayer for blessing and prepare you to expect God’s astounding answers as a regular part of your life experience.”

Through the book he teaches Christians that if they repeat Jabez’s prayer and make it an integral part of their devotional life, they will experience God’s favor in new and remarkable ways. “I challenge you to make the Jabez prayer for blessing part of the daily fabric of your life. To do that, I encourage you to follow unwaveringly the plan outlined here for the next thirty days. By the end of that time, you’ll be noticing significant changes in your life, and the prayer will be on its way to becoming a treasured, lifelong habit.”

The rest of the book simply teaches Wilkinson’s interpretation of the prayer and his guidance on praying it most effectively.

While the book met with enthusiastic reception among many Christians, it also met significant criticism. Many believers expressed concern that Wilkinson presumes upon God by saying that God promises to always answer this prayer. It was also criticized for being an example of the “vain repetitions” Jesus forbids in his most explicit teaching on prayer. In short, the book contradicts what the Bible teaches and models in prayer. A review at Grace to You highlights another area of concern. The book “paints an inconsistent picture of the Christian life. Wilkinson asserts that praying Jabez’s prayer leads to a life of incredible blessing and ever-increasing ministry opportunities—a life that sounds almost like a fairy-tale. However, little reference is ever made to the reality of genuine difficulties in life, and the necessity of sincere prayer to face those difficulties in a God-honoring way.” Continue reading to see why this becomes especially important.

In the wake of the success of The Prayer of Jabez, several authors penned book-length responses and many of these sold in large numbers. Derek Webb said that his song “Wedding Dress” was based on the book.

Wilkinson has since written a number of other books. While none have approximated the success of The Prayer of Jabez, several have sold in significant numbers, with Secrets of the Vine selling over two million copies, A Life God Rewards selling over one million, and The Dream Giver selling over a half million.

One interesting episode in Wilkinson’s life merits mention for the way it so clearly contradicts his own teaching. In 2005 and 2006 both the Wall Street Journal and Christianity Today reported on Wilkinson’s broken dream for Africa. In 2002, at the heart of the success of The Prayer of Jabez, Wilkinson traveled through Africa and later told Christianity Today, “God ripped open our chest, took out our heart, dug a hole in Africa, put it in, covered it with soil and said, ‘Now, follow your heart and move down to Africa’.” Wilkinson soon launched Dream for Africa and announced that he was moving to Africa to save one million AIDS orphans. He would begin his work in the small nation of Swaziland.

The first problem he determined to solve was the problem of hunger. “Because I don’t come out of this arena of humanitarian aid, I have a fresh pair of eyes,” he said. Soon teams from America were traveling to Africa to plant vegetable gardens in yards across the nation. The next issue he would solve was the AIDS crisis, and for this reason he dispatched teams of American Bible college students and African volunteers to every high school in Swaziland where they held abstinence seminars.

In 2002 Wilkinson was granted an audience with King Mswati III and soon thereafter announced the African Dream Village. This village would be what the Wall Street Journal termed “a massive tourist-orphan-industrial complex.” The village would have homes for 10,000 orphans with each one housing twenty children and an elderly Swazi couple to serve as parents and chaperones. The houses would have a $500 per week bed and breakfast suite for tourists, allowing wealthy Western tourists to combine vacation with charity. “Fifty such homes would form a mini-village of 1,000 orphans, built around a theme — such as Wild West rodeos or Swazi village life — to entertain guests. There would also be a new luxury hotel and an 18-hole golf course. Orphans would be trained as rodeo stars and safari guides at nearby game reserves.”

Wilkinson recruited a native Swazi to help him head the project. Together they located 32,000 acres of prime land and asked the government to grant the organization a ninety-nine-year lease. Over several months they pitched the idea to various government officials and received verbal commitments. Finally Wilkinson provided a 34-page proposal and gave the Swazi government five days to approve it, threatening he would take his plan elsewhere if they did not grant immediate approval. For several months he negotiated until he realized his position was hopeless. Swazi media was mocking his plan, Swazi citizens were outraged that he planned to take children away from their clans and villages, and the king showed that he had no genuine interest.

In October Wilkinson suddenly announced his resignation, saying “With the successful launch of Dream for Africa, my family and I feel our work in Africa is complete.” An internal memo to his staff explained that, to his regret, God had told him to leave Africa and return to North America. The dream dwindled and died.

Word of Mr. Wilkinson’s decision slowly reached Swaziland, where it dismayed his followers. “I don’t know how to handle this,” said Rev. Zakes Nxumalo. “People won’t understand; to them Bruce is everything,” he added. “How can he leave everything in the middle of the road?” asked 22-year-old Gcina Mdluli, who has taken a vow of sexual abstinence and now volunteers full-time in Mr. Wilkinson’s school anti-AIDS programs.

Mr. Wilkinson says that he blames neither God nor man. He says he weeps when he thinks of his disappointed acolytes, and is trying to come to grips with a miracle that didn’t materialize despite his unceasing recitation of the Jabez prayer.

The Prayer of Jabez came before my time as a writer and book reviewer. I knew it only as an absurd product with an entire industry surrounding it and multitudes lauding it. While I believe we can fairly understand and critique The Prayer of Jabez on its own terms, we understand it far better in the wake of the abject failure of Dream for Africa. The simple fact is: the prayer is not effective because it is not drawn faithfully from Scripture.