Last week I began a new Sunday series called “The Bestsellers.” The Evangelical Christian Publishers Association tracks sales of Christian books, and awards the Platinum Book Award for books whose sales exceed one million, and the Diamond Book Award for sales exceeding ten million. In this series I will look at the history and impact of some of the Christian books that have sold more than a million copies—no small feat when the average Christian books sells only a few thousand. We will encounter books by a cast of characters ranging from Joshua Harris, Randy Alcorn and David Platt all the way to Joel Osteen, Bruce Wilkinson and William Young. Today we look at one of the bestselling Christian books of all-time: Rick Warren’s The Purpose Driven Life. 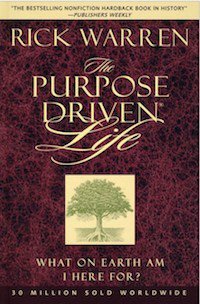 Rick Warren was born in 1954 in San Jose, California, the son of Jimmy and Dot Warren. Jimmy was a Baptist minister and from a young age Rick determined to follow in his father’s footsteps. He received an undergraduate degree from California Baptist University before going to Southwestern Baptist Theological Seminary to receive his pastoral training.

In 1980, Warren founded Saddleback Church in Laguna Hills, California. The church’s inaugural service was held on Easter Sunday in Laguna Hills High School with nearly 200 people in attendance. Under Warren’s leadership and winsome personality, the church grew rapidly, outgrowing facility after facility until they finally purchased land in Lake Forest and began construction there in the early 1990’s. By the time the church settled in the Lake Forest campus, they already had 10,000 people attending their services each week.

In 1995, Zondervan published the semi-autobiographical The Purpose Driven Church, a book that soon proved popular and influential in teaching the principles of church growth. While the book was targeted squarely at pastors and church leaders, it introduced Warren to the leaders who would be key to the success of his next work.

In 2002 Zondervan released The Purpose Driven Life, a forty-day devotional meant to lead the reader on a spiritual journey. Warren considered it an anti-self-help book, a manifesto for Christian living in the twenty-first century. It famously begins with the words, “It’s not about you.” Instead, Warren shows that we exist for the glory of God and that our innate desire for fulfillment can be found only in Him. The forty devotional readings are divided into five themes:

Each chapter contains a short devotional several pages in length followed by a section titled “Thinking About My Purpose” which offers a Point to Ponder, a Verse to Remember, and a Question to Consider.

The book was released hand-in-hand with a substantial viral marketing campaign meant to take advantage of the Internet and to encourage word-of-mouth and bulk sales. The 40 Days of Purpose campaign invited pastors to lead their entire churches through the book, reading it day-by-day and even preaching sermons provided by Warren. This campaign was launched with 1,5000 participating churches and that led to the book’s first print run of 500,000 copies selling out very quickly. Some 20,000 churches eventually took advantage of the program.

The book received a substantial and unexpected boost in March 2005 when Brian Nichols, a man wanted for a series of shootings in Atlanta, took Ashley Smith hostage in her apartment. During the seven hours he held her captive, she read chapter 32 aloud and later suggested that this helped in his decision to release her.

By January, 2003 The Purpose Driven Life had sold 500,000 copies and was awarded the Gold Book Award. Just two months later it had crossed the 1 million threshold and was awarded the Platinum Book Award. In 2005 it was awarded the Double Diamond Award for sales exceeding 20 million. It became and remains the bestselling hardcover non-fiction book in history and has now tallied over 32 million sales. It is the second most translated book after the Bible.

The 40 Days of Purpose program was integral to the soaring sales of the book and this showed marketers that Christians and their churches could be used to distribute resources. If marketers could get to the leaders, they could get to the people. This lesson was put to good use a short time later when Mel Gibson was ready to release his film The Passion of the Christ. He recruited Warren, used many of the same marketing techniques, and quickly had one of the biggest box-office surprises of all-time.

The Purpose Driven Life received a good deal of criticism from Christians and non-Christians alike. Many Evangelicals, and especially conservative Evangelicals, criticized Warren on a number of points, but most commonly for his use of Scripture. Through the book he relied on a host of Bible translations, often appearing to prefer a translation that said what was helpful for his point rather than a translation that was accurate. He also quoted partial verses in places where the full verse might have undermined his point. Many Christians were concerned by a weak call to the gospel which in turn led to a shallow prayer of commitment before being followed by a bold assurance of salvation. The book was also criticized by non-Christians who subjected it to disparagement and mockery. Overall, though, the criticism was almost unnoticeable against the roar of approval.

In 2005, before 30,000 people at Angel Stadium in Anaheim, Warren announced his Global P.E.A.C.E. Plan, a response to what he identified as the five great problems in the world: spiritual emptiness, self-serving leadership, poverty, disease, and illiteracy. Using the acronym P.E.A.C.E., he determined to mobilize Christians to work together to Plant churches that promote reconciliation, Equip servant leaders, Assist the poor, Care for the sick, and Educate the next generation.

Warren has been in news headlines on a regular basis. A 2005 issue of U.S. News and World Report named him one of “America’s Top 25 Leaders;” TIME magazine has named him one of the “15 World Leaders Who Mattered Most in 2004” and one of the “100 Most Influential People in the World.” In 2006 Newsweek named him as one of “15 People Who Make America Great.” During the 2008 Presidential election he hosted the Civil Forum on The Presidency with candidates John McCain and Barack Obama. In 2009 he gave the invocation and President Obama’s inauguration.

In April 2013 Warren was once more in the headlines following the tragic suicide of his son Matthew. Along with the Roman Catholic Diocese of Orange he recently co-sponsored “The Gathering on Mental Health and the Church” in which he called churches to action in helping those who suffer from mental illnesses.

Warren’s major follow-up to The Purpose Driven Life has been the subject of many rumors but has never materialized. Instead he published The Purpose of Christmas in 2008 and The Daniel Plan: 40 Days to a Healthier Life in 2013.

When The Purpose Driven Life was released to such fanfare, I was a member of a church that immediately adopted it and embarked on 40 Days of Purpose. As a small-group leader, I had to read the book and be prepared to lead discussions. I determined I would read it carefully and pay close attention to Warren’s use of Scripture. Knowing the book was gaining so much attention in the Christian world, I decided to do this through my blog in the hope that it would be helpful to others. That series proved to be very popular, and established me (whether fairly or not) as one of Warren’s critics. I stand by most of my concerns from those days and continue to be troubled by the way Warren uses the Bible.