Today I am kicking off a brand new series of articles I am titling The Defenders. Through brief sketches of Christian leaders, I hope to draw attention to believers known for defending the church against specific theological challenges or false teachings. I will be focusing on modern times and have chosen to begin with James Montgomery Boice, a long-time defender of the doctrine of inerrancy.

Wayne Grudem defines the doctrine in this way: “The inerrancy of Scripture means that Scripture in the original manuscripts does not affirm anything that is contrary to fact.” Said otherwise, “Inerrancy is the view that when all the facts become known, they will demonstrate that the Bible in its original autographs and correctly interpreted is entirely true and never false in all it affirms, whether that relates to doctrines or ethics or to the social, physical, or life sciences” (P. D. Feinberg). If it is true that the Bible is reliable and contains nothing contrary to fact, then it is worthy of our trust and able to guide us in matters pertaining to life and godliness.

It was this doctrine, and the attacks upon it, that drew the attention of James Montgomery Boice. 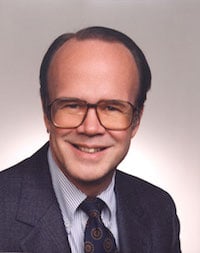 James Montgomery Boice was the much-loved pastor of the historic Tenth Presbyterian Church in Philadelphia from 1968 until his death in 2000. A prolific author, he penned dozens of books and commentaries, including a massive and influential four-volume work on Paul’s Epistle to the Romans. His long pastoral ministry was unblemished and his congregants remember him as a kind and loving pastor. But outside that congregation he is remembered as a fierce defender of the doctrine of inerrancy.

In a stirring tribute to his friend and mentor, Richard Phillips says that Boice’s ministry can be roughly divided into three phases. The first of these phases lasted from the mid-1960’s to just around 1980, and it was here that Boice distinguished himself as a defender of the doctrine of inerrancy. Phillips explains:

These were the years when Boice was wrapping up the education he received in liberal institutions like Princeton Seminary and the University of Basel. In his John commentary, dating from these early years, one will frequently read Boice defending the Bible from the interpretations of liberals like Rudolf Bultmann. These were also the years when Boice was ordained in the liberal United Presbyterian Church, so that the context for his ministry was that of opposition to liberal attacks on the Bible. It is no surprise that Boice’s chief concern during these years was to defend the inerrancy and authority of Scripture, as seen in his leadership of the International Council on Biblical Inerrancy (ICBI).

The International Council on Biblical Inerrancy was founded in 1977 for the express purpose of defining and defending the doctrine of inerrancy. Boice, who that year would publish Does Inerrancy Matter?, was asked to serve as Chairman. The Council met in 1977 and determined they would write a book-length response to Jack Rogers’ Biblical Authority, an influential work championing neo-orthodoxy and denying inerrancy. Boice served as editor for that work and in it he warned “even among evangelicals, Christian doctrine and Christian living are moving progressively away from the biblical standard and from the classical teachings of the church.” In the fall of 1978 the ICBI held their first conference with nearly 300 Christian leaders in attendance. During that conference the Council met repeatedly and wrote what came to be known as The Chicago Statement on Biblical Inerrancy.

In 1988 the ICBI was disbanded, having completed the work it was created to do. Mark Dever says that “The plan, all along, was to have a limited life, so as not to form another institution which could go astray. Its purpose was to hold conferences and publish books to the end of championing the traditional position on the inerrancy of Scripture. And their efforts—and those of their friends at the time—have left us one of the richest stores of literature on inerrancy.”

While Boice’s ministry progressed through two more phases, each with a different focus, he did not leave inerrancy behind. In 1984 he wrote Standing on the Rock: Upholding Biblical Authority in a Secular Age. In his theological work Foundations of the Christian Faith he returned to inerrancy, saying:

Can God reveal himself to humanity? And, to be more specific, can he reveal himself in language, the specifics of which become normative for Christian faith and action? With an inerrant Bible these things are possible. Without it, theology inevitably enters a wasteland of human speculation. The church, which needs a sure Word of God, flounders. Without an inerrant revelation, theology is not only adrift, it is meaningless. Having repudiated its right to speak on the basis of Scripture, it forfeits its right to speak on any other issue as well.

He continued to display leadership among Reformed Protestants. In 1994 he convened a meeting with a number of key leaders and together they founded the Alliance for Confessing Evangelicals, a work that carries on today, and continues to champion a high view of Scripture.

Boice once wrote these words (italics are mine):

It is sometimes said by those who take another position that inerrantists have just not faced the facts about the biblical material. This is not true. These men have faced them. But they are convinced that in spite of those things that they themselves may not fully understand or that seem to be errors according to the present state of our understanding, the Bible is nevertheless the inerrant Word of God, simply because it is the Word of God, and that it is only when it is proclaimed as such that it brings the fullest measure of spiritual blessing. May God raise up many in our time who believe this and are committed to the full authority of the Word of God, whatever the consequences. In desiring that “Thus saith the Lord” be the basis for the authority of our message, the seminaries, whether liberal or conservative, are right. But we will never be able to say this truthfully or effectively unless we speak on the basis of an inerrant Scripture.

God did raise up those people, and Boice’s efforts were rewarded with a generation committed to the inerrancy of the Bible. The Chicago Statement remains a clear, strong, and scriptural call to inerrancy. Boice’s ministry still resonates in the church even fourteen years after his death, and it will continue to do so long after his name is forgotten. At his death his friend R.C. Sproul said it well: “Here we had a valiant warrior for the church militant in our age.”