A few weeks ago I set out on a new series of articles through which I intend to scan the history of the church—from its earliest days all the way to the present time—to examine some of Christianity’s most notorious false teachers. Along the way we will visit such figures as Arius, Pelagius, Fosdick, and even a few you might find on television today. We continue this morning with a false teacher—the first woman in the series—who has around 18 million followers in the world today.

Ellen Gould Harmon was born on a small farm near the village of Gorham, Maine, on November 26, 1827. Only a few years after her birth, her parents Robert and Eunice Harmon gave up farming to move to the nearby town of Portland where her father became a hat maker. When Ellen was nine she was permanently disfigured when a fellow student maliciously hit her in the head with a rock. The rock put her into a coma that lasted several weeks and forced her to miss a long period of schooling.

When Ellen was twelve, she and her family attended a Methodist camp meeting in Buxton, Maine, and there she had a formative religious experience in which she professed faith in Jesus Christ. In 1840 and 1842 she and her family attended Adventist meetings and become devotees of William Miller. Miller had dedicated himself to the study of biblical prophecy and was convinced that Christ would return on October 22, 1844. When Christ did not return, a non-event that would become known as The Great Disappointment, most people abandoned Adventism. But in the resulting confusion, Ellen claimed to have received visions that were soon accepted as God-given revelation. The small Adventist movement that remained was split by many rifts and much infighting, but Ellen was believed to have a gift that could reunite and guide the movement. Her dreams and visions continued and she quickly became a leader among them.

In 1846, Ellen married a young Adventist preacher named James White and together they traveled extensively, spreading the Adventist faith to New England and beyond. Twelve months later she gave birth to a son, one of four children she would bear, but soon left the child with friends so she could carry on traveling, preaching, and writing. 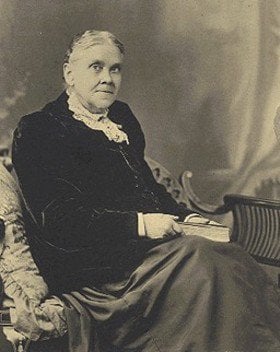 In 1855 the Whites moved to Battle Creek, Michigan, and that became Adventism’s hub. Five years later, representatives from each Adventist congregation gathered there and determined that henceforth they would be known as Seventh-day Adventists. Soon after they formally organized as a denomination.

All through this time Ellen continued to receive prophetic dreams and visions—some 2,000 during her lifetime—and through them she guided and formed the church. Over her lifetime Testimonies for the Church expanded from a mere sixteen pages to nine full volumes. In 1863 she received a vision about human health and her followers soon adopted her health regulations as part of their practice, rejecting meat, coffee, and medication in favor of natural remedies.

The Adventist movement continued to expand and the Whites were in high demand across America. They traveled constantly, addressing large congregations and meetings. After James died in 1881, Ellen traveled all the more, spending two years in England and almost nine years in Australia. She spent most of the final fifteen years of her life in Elmshaven, California, and was largely consumed with writing and organizing the growing denomination. She died on July 16, 1915, at the age of 87. During her lifetime she had preached countless times and had written some 5,000 articles and 40 books. By the time she died, Seventh-day Adventism had a worldwide membership of nearly 140,000.

In many respects Ellen G. White appeared to hold to the historic Christian faith. She believed in Christ’s imminent bodily return, she held to the inspiration and authority of the Bible, and she taught that we are saved by Christ’s righteousness rather than our own. But amid that truth were some dangerous false teachings. I will focus on only two.

The most obvious false teaching was the one that gave the Seventh-day Adventists their name: the view that the proper day of worship is Saturday rather than Sunday. Shortly after James and Ellen married, they studied a tract written by Joseph Bates titled Seventh-day Sabbath and became convinced that they were to keep Saturday as the sabbath. Six months later, Ellen had a vision in which she saw the law of God with a halo of light surrounding the fourth commandment. She and her husband took this as proof that their newfound understanding was correct. They elevated this to a doctrine of first importance.

Of far more concern was White’s aberrant view of death, hell, and eternal punishment. Adventists adopted several key tenets including one stating that God does not eternally torment sinners, but that the dead enter into soul-sleep until the second coming and last judgment. At that time the punishment for sinners will be that they cease to exist.

White held that a God of eternal wrath must be incompatible with a God of love and kindness. In The Great Controversy she wrote, “How repugnant to every emotion of love and mercy, and even to our sense of justice, is the doctrine that the wicked dead are tormented with fire and brimstone in an eternally burning hell; that for the sins of a brief, earthly life they are to suffer torture as long as God shall live.”

She also believed that God would simply annihilate the souls of those who did not follow him. “But I saw that God would not shut them up in hell to endure endless misery, neither will He take them to heaven; for to bring them into the company of the pure and holy would make them exceedingly miserable. But He will destroy them utterly and cause them to be as if they had not been; then His justice will be satisfied. He formed man out of the dust of the earth, and the disobedient and unholy will be consumed by fire and return to dust again.”

Adventism nearly came to an end in the days following The Great Disappointment. But Ellen G. White gave the movement new life and a new voice. Through constant preaching, teaching, and evangelism, she and her followers had grown the movement to nearly 140,000 by the time of her death in 1915. Today there are an estimated 18 million Seventh-day Adventists in the world. Their individual beliefs vary so widely that some Christians consider them a cult while others do not.

Seventh-day Adventism has continued to evolve. They continue to regard Ellen G. White as having a unique, God-given gift of prophecy. They continue to hold to the sabbath and to their emphasis on healthy eating and living. They continue to deny both the immortality of the soul and the reality of hell as eternal, conscious torment. Successors to Ellen G. White have also developed the distinctive and troubling doctrine of Investigative Judgment. (CARM helpfully lists their affirmations, denials, and most troubling teachings and provides this counsel: “There are too many problems within Seventh-day Adventism to recommend it as a safe church.  Though there are Seventh-day Adventist groups that are within orthodoxy, there are too many of them that are not.”)

The Bible counters much of what Ellen G. White taught and what her church teaches today.

In the matter of the sabbath, the New Testament clearly shows Christians worshiping together on Sunday rather than Saturday. Not only that, but Romans 14 teaches that each person must be convinced in his own mind about the day they observe as the Lord’s Day; if the sabbath was binding on all Christians today, this passage would be meaningless.

In contrast to White’s teaching on the eternal destiny of those who do not know the Lord, the Bible teaches that hell is real, that it is eternal, and that in hell God’s wrath is poured out in conscious, everlasting punishment. John the Baptist spoke of Jesus, saying, “His winnowing fork is in his hand, and he will clear his threshing floor and gather his wheat into the barn, but the chaff he will burn with unquenchable fire” (Matthew 3:12). Jesus himself spoke of hell saying, “if your hand causes you to sin, cut it off. It is better for you to enter life crippled than with two hands to go to hell, to the unquenchable fire” and “these will go away into eternal punishment, but the righteous into eternal life” (Mark 9:43, Matthew 25:46). And in the epistles, Paul warned, “They will suffer the punishment of eternal destruction, away from the presence of the Lord and from the glory of his might” (2 Thessalonians 1:9). Only by deliberately twisting the Scriptures can anyone deny the terrifying reality that hell is real and that those who do not know the Lord will be there to face his wrath forever.