A few months ago I set out on a new series of articles through which I am scanning the history of the church—from its earliest days all the way to the present time—to examine some of Christianity’s most notorious false teachers. Along the way we have visited such figures as Arius, Pelagius, Joseph Smith, and Ellen G. White. Today we will look at the life and legacy of a man who prepared the way for Robert Schuller, Joel Osteen, Oprah Winfrey, and so many others.

Norman Vincent Peale was born on May 31, 1898, in Bowersville, Ohio, the first child of Charles and Anna Peale. Charles was a Methodist minister who served a variety of churches in Ohio, and before long Norman, too, began to consider ministry as his vocation. When he was a boy, one of his teachers accused him of being “a weak willy-nilly” and he soon realized the teacher’s assessment was correct. He saw that he would need to push himself past a deep-rooted inferiority complex and crippling self-doubt.

As a young man Peale attended Ohio Wesleyan University and Boston University School of Theology. During his first summer break he returned home and was asked to fill a nearby pulpit. He dutifully prepared a sermon and showed it to his father. His father read it and promptly advised burning it, telling his son, “the way to the human heart is through simplicity.” These are words the young man took to heart.

In 1922 he was ordained in the Methodist Episcopal Church, and was assigned a small congregation in Berkeley, Rhode Island. Two years later he moved to Brooklyn, New York where he established himself as a gifted communicator so that in only three years he grew a church from 40 to 900 members. He spent a few years at another Methodist congregation in Syracuse, New York, before changing his affiliation to the Reformed Church in America so he could pastor Marble Collegiate Church, one of the oldest Protestant congregations in America. When he arrived, this church had around 600 members; upon his departure 52 years later it had 5,000. It was here that he would gain worldwide acclaim and notoriety as a teacher of positive thinking. 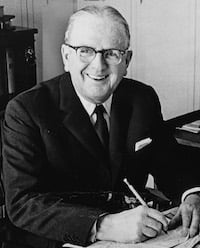 Peale developed a fascination with psychiatry as an answer, or partial answer, to his congregant’s problems. While he was at Marble, he teamed up with a Freud-trained psychiatrist, Dr. Smiley Blanton, to begin a religious-psychiatric clinic in the church basement. They wanted to respond to the psychological needs of their congregation and especially the deep-rooted effects of the Great Depression. In 1951 this clinic was organized into the American Foundation of Religion and Psychiatry, with Peale as president and Blanton as executive director.

Peale spread his teaching through a variety of media. While serving the church in Syracuse he founded a radio program called “The Art of Living,” and it would broadcast his sermons for 54 years. By 1952 he and his wife were also on the new medium of television, featured on the show “What’s Your Trouble?” In 1945, along with his wife Ruth, and Raymond Thornburg, a local businessman, he founded Guideposts. What was at first a weekly four-page leaflet evolved to a monthly inspirational magazine that would soon have 2 million subscribers.

During his lifetime, Peale authored 46 books, and the most successful by far was The Power of Positive Thinking. Published in 1952, it stayed on the New York Times list of bestsellers for 186 consecutive weeks and sold 5 million copies, making it one of the bestselling religious books of all-time. It began with these words:

This book is written to suggest techniques and to give examples which demonstrate that you do not need to be defeated by anything, that you can have peace of mind, improved health, and a never-ceasing flow of energy. In short, that your life can be fully of joy and satisfaction.

The book had chapters with titles such as “I Don’t Believe in Defeat,” “How to Have Faith in Healing,” and “Power to Solve Personal Problems.” Each chapter contained sections titled “energy-producing thoughts,” “spirit-lifters,” or “faith attitudes.” Much of his teaching was distilled to lists of eight practical formulas or seven simple steps. This book rocketed Peale to new levels of fame and acclaim, and elevated his message with him. He became one of the most influential Christian leaders in the world, gaining a voice into business and politics, even officiating at the wedding of David Eisenhower and Julie Nixon. On March 26, 1984 President Ronald Reagan awarded him the highest civilian honor in the United States, the Presidential Medal of Freedom, for his contributions to theology.

Peale retired as senior pastor in 1984 and died of a stroke on December 24, 1993 in Pawling, New York. He was ninety-five years old. President Bill Clinton honored him with these words: “While the Clinton family and all Americans mourn his loss, there is some poetry in his passing on a day when the world celebrates the birth of Christ, an idea that was central to Dr. Peale’s message and Dr. Peale’s work. He will be missed.”

Norman Vincent Peale popularized what came to be known as positive thinking. He took existing ideas from Christian Science and other inspirations, gave them a biblical veneer, integrated them with psychology, and packaged them for the masses, spreading his message through The Power of Positive Thinking and his other works. His foremost contribution to the world was this notion that thoughts are causative, that our thoughts can change our lives, our health, our destiny. Readers were thrilled with this notion that if they believed it, they could have it, or be it, or do it.

Peale believed we live in a world that is mental more than physical and this allows our thoughts to be determinative. If this is the case, all that stands between us and our desires is properly controlling our thoughts. In one of his books he taught the importance of

a form of mental activity called imaging. It consists of vividly picturing, in your conscious mind, a desired goal or objective, and holding that image until it sinks into your unconscious mind, where it releases great, untapped energies. It works best when it is combined with a strong religious faith, backed by prayer, and the seemingly illogical technique of giving thanks for benefits before they are received. When the imaging concept is applied steadily and systematically, it solves problems, strengthens personalities, improves health, and greatly enhances the chances for success in any kind of endeavor. (Positive Imaging)

None of this would be remarkable, except that he taught it as a minister who claimed to be a Christian. Yet as a Christian minister he denied that God was a being, saying “Who is God? Some theological being? He is so much greater than theology. God is vitality. God is life. God is energy. As you breathe God in, as you visualize His energy, you will be reenergized!” (Plus: The Magazine of Positive Thinking). As a Christian minister he told Phil Donahue, “It’s not necessary to be born again. You have your way to God, I have mine. I found eternal peace in a Shinto shrine … I’ve been to Shinto shrines and God is everywhere. … Christ is one of the ways! God is everywhere.” He denied the very heart of the Christian faith and replaced it with his doctrine of positive thinking.

Many Christians critiqued Peale, including Episcopalian theologian John Krumm who saw that Peale had reduced God to a force and made Christianity self-centered rather than God-centered. “Very little is said about the sovereign mind and purpose of God; much is made of the things men can say to themselves and can do to bring about their ambitions and purposes.” Surprisingly, some Christians continued to embrace him. In 1966 Billy Graham said, “I don’t know of anyone who had done more for the kingdom of God than Norman and Ruth Peale or have meant any more in my life for the encouragement they have given me.”

The popularity of Peale’s teachings guaranteed his lasting influence. One of his most committed devotees, who patterned himself accordingly, was Robert Schuller, also a minister in the Reformed Church in America. Schuller restyled “positive thinking” into “possibility thinking,” but kept much of the core teaching intact. But Peale’s influence was much wider than that. His voice can be heard behind contemporary books like The Secret, which advocates the law of attraction, another way of speaking and believing reality into existence. His voice can be heard behind the Oprah Winfrey’s, Joel Osteen’s, T.D. Jakes’, and Tony Robbin’s of the world, along with a host of others who teach that the power of the mind, combined with some kind of faith, can change your life and change the world.

Mitch Howoritz points out, rightly I think, that this idea that thoughts are causative is one of the most important theological and psychological concepts of our time. Before Peale it was rare to hear phrases like “Nothing is impossible” or “Be all you can be.” But today we take such phrases for granted. It is not coincidental that the first chapter of Peale’s book is titled “Believe in Yourself.”

The Bible makes it clear that the troubles we experience in this life are not merely the result of negative thinking that can be overcome by tapping into our potential through positive thinking. They are the result of a deep-seated rebellion against God that involves not only the mind, but the will. We simply cannot overcome the evils of this world, or even the evil in our hearts, in our own strength. Apart from Christ we can do nothing (John 15:5). Apart from being born again, we are eternally dead in our trespasses and sins (Ephesians 2:1).

Where Peale taught that our deepest problem is a lack of belief in ourselves and that our salvation comes with a simple shift in thinking, the Bible teaches that no man can save himself, regardless of how positive his thoughts may be. His salvation must come from outside himself. The glory of Jesus Christ is in the fact that he “has now reconciled in his body of flesh by his death” sinners “who once were alienated and hostile in mind, doing evil deeds” (Colossians 1:21-22). Tragically, by his life and legacy, Peale showed that he rejected this Savior and chose to trust in his own strength.