A few months ago I set out on a series of articles through which I am scanning the history of the church—from its earliest days all the way to the present time—to examine some of Christianity’s most notable false teachers and to examine the false doctrine each of them represents. Along the way we have visited such figures as Joseph Smith (Mormonism), Ellen G. White (Adventism), Norman Vincent Peale (Positive Thinking), and Benny Hinn (Faith Healing). Today we turn to a man who pastors a mega-church, whose sermons are a staple on TBN, and who has written a long list of bestselling books.

Thomas Dexter Jakes was born on June 9, 1957 in South Charleston, West Virginia and grew up in nearby Vandalia. As a teenager he was charged with supporting and caring for his invalid father and dedicated himself to that task. While still a young man he felt that the Lord was calling him to ministry so he enrolled at West Virginia State University and began to preach occasionally. Before long, though, he dropped out of school to work at Union Carbide, while continuing to preach on a part-time basis. In 1981, at the age of 24, he married Serita Ann Jamison.

Around this time Jakes, still eager to be a minister, founded Greater Emmanuel Temple of Faith, a small, independent, Pentecostal congregation in Montgomery, West Virginia. The church quickly began to grow from the ten founding members meeting in a small storefront to two hundred and then three hundred attendees. Jakes soon came into contact with Bishop Sherman Watkins who had founded the Higher Ground Always Abounding Assembly, which at that time was an association of more than two hundred Pentecostal churches. Watkins ordained Jakes and suggested that he plant a church in the Charleston Area. 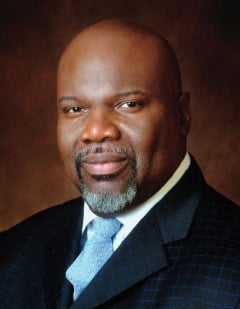 In 1990 Jakes moved to Charleston and began to focus on the spiritual concerns of the women in his church, many of whom were in abusive or other otherwise difficult relationships. He called his class “Woman, Thou Art Loosed” and this later became the title of his bestselling book and the name of an annual conference. By 1993 he had moved his congregation to Cross Lanes, West Virginia, where the mixed-race congregation exploded to more than 1,100 people. The next year he established T.D. Jakes Ministries to produce televised sermons and conferences. In 1996 he moved to Dallas, Texas, where he founded the Potter’s House. Today some 17,000 people call it their home church. His television broadcast “The Potter’s House” appears on the Trinity Broadcasting Network and other networks around the world, making him one of the world’s most prominent and recognizable preachers. His annual MegaFest event draws up to 100,000 people each year. He has written more than 30 books, many of which have appeared on the lists of bestselling Christian books.

A gifted speaker and excellent communicator, Jakes has been widely praised for his teaching and his leadership. In September of 2001 he appeared on the cover of TIME magazine with the title, “Is this man the next Billy Graham?” He has also appeared on Oprah Winfrey’s network and has reciprocated the invitation, inviting her to appear at his MegaFest event. He has acted in or produced several movies including the current Heaven Is For Real. Among his acquaintances he counts both President George W. Bush and President Barack Obama.

T.D. Jakes is associated with several troublesome teachings including the prosperity gospel and positive thinking. For our purposes, though, we will look at his teaching on the Trinity. Jakes has long been associated with Oneness Pentecostalism which holds to an unorthodox position on the Trinity. This position is known as Modalism or, historically, as Sabellianism.

Jakes has wide influence in many circles. Some 17,000 people attend his church on a weekly basis and millions more encounter his teaching through his broadcasts, conferences, movies, and books. He is one of a few Christian figures who has a voice that extends into the broader culture through association with Oprah Winfrey, American presidents, and other leaders.

These minor distinctions in trinitarian theology, a word here, a letter there, actually represent colossal differences and even eternal differences—the difference between heaven and hell. Modalism has long been labeled as a heresy meaning that if you believe it in place of the biblical understanding of the Trinity, you are not and cannot be a true Christian (much of this section can be found in Wayne Grudem’s Systematic Theology).

In all that is, in all that exists, there is only one God. No truth was more precious to the Israelites of old. In Isaiah’s prophecy God records:

It could hardly be clearer. The New Testament is equally explicit. Paul writes, “There is one God, and there is one mediator between God and men, the man Christ Jesus” (1 Timothy 2:5). James agrees: “You believe that God is one; you do well. Even the demons believe—and shudder” (James 2:19).

To summarize those seven statements, we might say, “God eternally exists as three persons, Father, Son, and Holy Spirit, and each person is fully God, and there is one God.” In all that we believe, in all that we affirm or deny, we must hold these seven statements together. If we take away one, the entire structure collapses. In fact, every time the Trinity comes under attack, or every time the Trinity is denied, it is because one of these statements has been taken away or tampered with.

Though he has recently denied being a Modalist, T.D. Jakes continues to use manifestations in place of persons and continues to affirm the faith of those who remain ardent Oneness Pentecostals. This is no minor quibble in theology because it contradicts and confuses the orthodox and accepted view of the Trinity. Until he clearly affirms the orthodox definition of the Trinity and denies the Modalist definition of the Trinity, we must regard him warily as a false teacher.