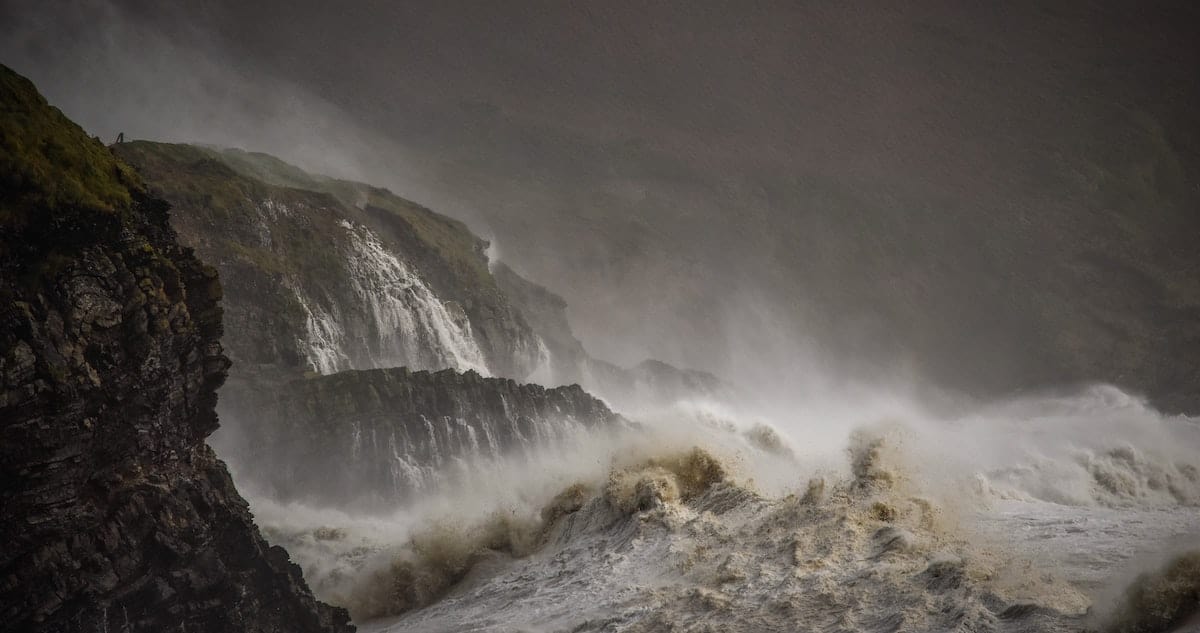 In her time, Marianne Farningham, who was actually named Mary Ann Hearn, was well-known for her devotional poetry, as well as some of her hymns, (though I am not aware of any of those that have really stood the test of time). While most of her poems were topical, some of them were narrative in style, including “The Last Hymn.” Though I admit this one perhaps tips into a bit of Victorian melodrama, I still quite enjoy it. Read—preferably aloud—and hear the tale she tells of a man’s final song.

The Sabbath-day was ending, in a village by the sea,
The uttered benediction touched the people tenderly,
And they rose to face the sunset in the glowing, lighted West,
And then hastened to their dwellings for God’s blessed boon of rest.

But they looked across the waters, and a storm was raging there;
A fierce spirit moved above them—the wild spirit of the air—
And it lashed and shook, and tore them, till they thundered, groaned and boomed,
And, alas! for any vessel in their yawning gulfs entombed.

Very anxious were the people on that rocky coast of Wales,
Lest the dawn of coming morrows should be telling awful tales,
When the sea had spent its passion, and should cast upon the shore.
Bits of wreck, and swollen victims, as it had done heretofore.

With the rough winds blowing round her, a brave woman strained her eyes,
And she saw along the billows a large vessel fall and rise.
Oh! it did not need a prophet to tell what the end must be,
For no ship could ride in safety near that shore on such a sea.

Then the pitying people hurried from their homes and thronged the beach,
Oh! for power to cross the waters and the perishing to reach!
Helpless hands were wrung for sorrow, tender hearts grew cold with dread,
And the ship urged by the tempest, to the fatal rock shore sped.

“She has parted in the middle! Oh, the half of her goes down!
God, have mercy! Is His heaven far to seek for those who drown?'”
Lo! when next the white, shocked faces looked with terror on the sea.
Only one last clinging figure on a spar was seen to be.

Nearer to the trembling watchers came the wreck tossed by the wave.
And the man still clung and floated, though no power on earth could save.
“Could we send him a short message! Here’s a trumpet! shout away!”
‘Twas the preacher’s hand that took it, and he wonder’d what to say.

Any memory of his sermon? Firstly? Secondly? Ah, no.
There was but one thing to utter in that awful hour of woe;
So he shouted through the trumpet, “Look to Jesus! Can you hear?”
And “Aye, aye, sir! “rang the answer o’er the waters loud and clear.

Then they listened,— “He is singing ‘Jesus, lover of my soul,”
And the wind brought back the echo, “while the nearer waters roll;”
Strange indeed it was to hear him, “till the storm of life was past,”
Singing bravely from the waters, “Oh, receive my soul at last”

He could have no other refuge! “Hangs my helpless soul on thee;
Leave, oh, leave me not.” —The singer dropped at last into the sea,
And the watchers looking homeward through their eyes by tears made dim,
Said, “He passed to be with Jesus in the singing of that hymn.”