Have you ever seen one of those photo collages of a drug addict as she descends deeper and deeper into her addiction? It is startling to see that in just a few short years an addict can be transformed—or perhaps better, deformed—from an attractive, fresh-faced young lady to a hollow-eyed shadow of a human being. Some drugs are so powerful and so devastating that they rot not only the mind and soul but the body as well. The substance that promises such delight actually delivers terrible destruction. 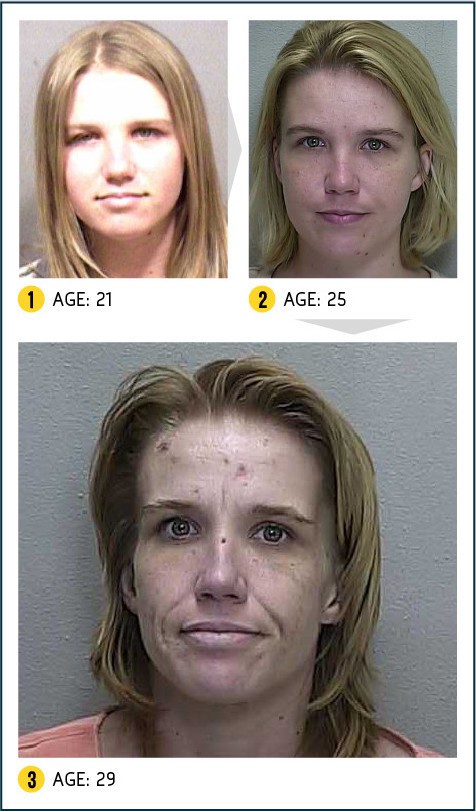 I see the horror of sin pictured in the decaying face of the addict. Her drug is both alluring and punishing. It promises joy and delivers bondage. Meth is its own punishment. It takes captive. It rots. It destroys. And in that way it is a particularly vivid illustration of every other sin.

I have been working my way back through the book of Romans, and am just now wading through the terrible truths that come at the end of the first chapter. Here Paul explains why and how God’s wrath is a just response to human depravity. As I have read and considered this passage I have been struck anew with the horror of sin. I have been startled again by the way in which God expresses his wrath.

What we learn from Romans 1 is that the most terrifying thing God can do in this life is give you over to your sin. We see that God is the one who restrains human evil—he restrains evil in this world and evil within each one of our hearts. But as people continue to rebel and as they continue to pursue their sin, God eventually lessens his restraint, he loosens his grip on the chain that is holding back the great waves of depravity within each human heart. As the rebellion continues, God eventually lets go, giving people their desire, giving them over to their sin.

We speak often of hell and eternal consequences for sin, but perhaps we give too little attention to God’s action against sin in this world and this life. God’s punishment for sin is sin. His punishment is allowing people to experience the life-stealing, soul-rotting consequences of their sin. He expresses his wrath by allowing them the very thing they want. He does this because when they get the thing they want, it only deepens their destruction. In this way, sin is its own punishment. And in all the world I see nothing more terrifying than this: the prospect of God allowing people to experience the full impact and weight of their sinfulness. Nothing is more terrifying than God determining that he will no longer restrain the evil within them.

There is a call here for each one of us to identify sin in our lives and to put it to death. We need to pray that we would have a tender conscience that responds eagerly and immediately to the Spirit speaking through the Word. We need to heed the Holy Spirit as he calls and enables us to do this. We must take care that we do not harden ourselves against his presence lest he give us the very thing we want. How many who were once sure of their salvation were left spinning and doubting when God relaxed his grip and allowed them to sink deeper into that ongoing sin?

There is a call here as we interact with unbelievers as well, and it is a call to compassion. We can be compassionate because we get this glimpse into what God is doing, into how he is expressing his wrath against sinners. This compassion expresses itself in imploring people to turn from their sin, to understand that their sin only deepens their captivity, to understand that their growing desire to sin only proves their bondage. The greatest act of compassion is to tell people of their sinfulness and to point them to the hope of the gospel. It is for them, and for us, the deepest hope and the only hope.