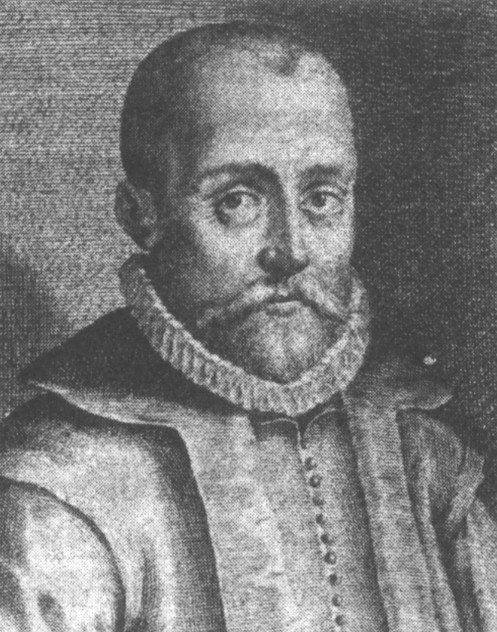 William Perkins was born in 1558 to Thomas and Hannah Perkins in Warwickshire county, England. At the age of 19 he went to Cambridge where he earned his Bachelors and then finished with his Masters in 1584.

He was converted to Christ while at Cambridge and though the details are scarce, one story is that he overheard a woman on the street instruct her child by referring to his drunkenness, which the Lord used to convict and then save him.

After graduation, he remained in Cambridge and served as lecturer (preacher) at Great St. Andrews Church, an influential pulpit just across the street from the college. He also served as a fellow at the college–one who preached, lectured and tutored students, ensuring their academic as well as financial and moral success. For a couple of years he also served as dean of the college.

In 1595 Perkins married a young widow, Timothye Cradock. In the seven years of their marriage, before his death in 1602, they conceived seven children. Three died in infancy, and the last was born after Perkins’ passing.

After his marriage, Perkins continued his preaching ministry at Great St. Andrews. He also invested much of his time in writing, composing almost 50 separate treatises on all manner of biblical, theological, and practical subjects. His works became extremely popular, winning a large audience in England and abroad and being translated into at least 9 other languages.

The depth, clarity, rigor, and scope of Perkins’ teaching made him unusually influential. As a Calvinist, he preached the sovereignty of God, but not in the hotheaded, divisive manner that some before him had. He sought to wed the truths of providence with human responsibility, and to focus on the entire spiritual lives of people and not just their theology. Instead of seeking to reform the Church of England through polity, he sought to bring change from within through biblical teaching, spiritual development, and pastoral care.

Perkins died from complications with kidney stones at the age of 44.

Perkins set the standard for what would become English Puritanism. As J. I. Packer writes, “No Puritan author save Richard Baxter ever sold better than Perkins, and no Puritan thinker ever did more to shape and solidify historic Puritanism itself” (Puritan Portraits). Perkins’ example and influence “established mainstream Puritanism as a movement majoring on evangelism and spiritual life, bearing with ecclesiastical inconvenience for the time being in order to fulfil in the Church of England a full-scale soul-saving ministry.”

The Art of Prophesying

The Foundation of Christian Religion Gathered into Six Principles