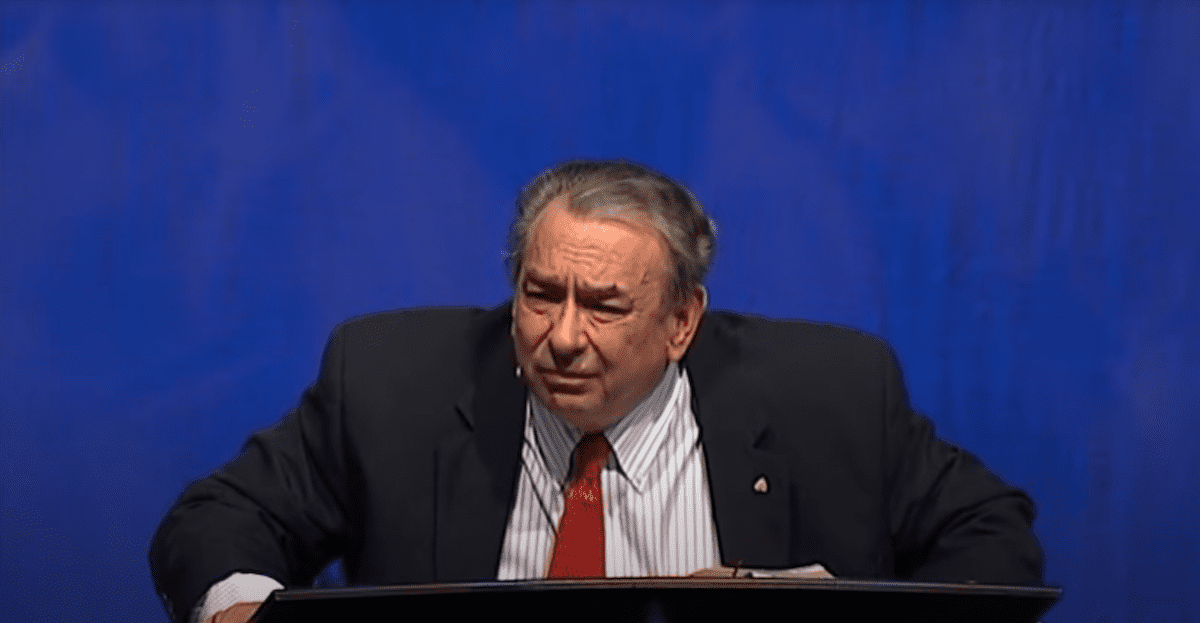 It was still the early days of what came to be known as the New Calvinism or the Reformed Resurgence. The Together for the Gospel Conference had been formed in 2006 and now, in 2008, was gathering for the second time. The four founders were joined again by guests John Piper, John MacArthur, and R.C. Sproul (and, for the first time, Thabiti Anyabwile). R.C. Sproul led the conference’s fifth session and spoke on “The Curse Motif of the Atonement.” He preached one of those sermons that is still being discussed long after the event and even long after his death.

The conference summarizes Sproul’s sermon in this way: “Drawing deeply upon the imagery of the Old Testament, RC Sproul richly meditates on the implications of what Jesus suffered on the cross and what he saved us from. Bearing the weight of the curse is either placed upon individuals or freely upon the Holy One who took it from us. Jesus became cursed, so that [we] could be counted righteous in Him.”

I was there that day and, like so many others, found myself completely transfixed by this sermon. I had listened to plenty of Sproul prior to this time and had read some of his most noteworthy books like The Holiness of God. Yet even though the man and the message were familiar, I still sat in rapt attention, both recoiling at the horror of what I was hearing and worshiping at the beauty.

The crescendo of the whole message came in the final two minutes. Sproul was contemplating what happened between the Father and the Son when all of our sin was placed upon Jesus and when he faced the Father’s wrath. He explained it like this: “It was as if there was a cry from heaven—excuse my language but I can be no more accurate to say—it was as if Jesus heard the words ‘God damn you.’ Because that’s what it meant to be cursed, to be damned, to be under the anathema, of the Father.”

I have often been struck by the intensity with which many preachers deliver their sermons. Many preachers are aware of the importance of preaching and humbled by the fact that it falls to them to convey deep truths to an expectant people. It is no small thing to stand in a pulpit and preach the Word. Aware of this fact, preachers seem to bring messages that are intense from beginning to end. That intensity is often expressed in volume. If we were to create a little graphic showing the vocal range of a preacher with a whisper at the bottom, a normal speaking voice in the middle, and a shout at the top, many preachers would deliver the majority of their sermons entirely in the top half of the graphic—occasionally in a normal speaking voice, but mostly at an elevated volume. When they need to pack an extra punch, they get louder and perhaps even shout. But they only ever employ the top half of their vocal range.

I’m struck that Sproul took the opposite approach. Throughout this message, he delivers many of the most important lines in the lower part of his vocal range, and often at a bare whisper. He leans toward the audience and the audience responds by leaning toward him, straining to hear. He slows the tempo and lowers his voice to speak many of his most important lines. (See also this clip from 40:00 – around 41:30)

This is a powerful rhetorical technique that few preachers use at all and few use more effectively than Sproul. It is dramatic without being melodramatic, performative without being manipulative. It complements powerful truths with skillful technique. It’s compelling and potent. And, for many preachers, completely untried. It’s my conviction that most preachers would have shouted these lines rather than whispered them. And it’s equally my conviction that this would have proven less effective.

And so I guess my encouragement to those who preach is to draw some lessons from Sproul. He has long been commended as not only the Reformed world’s best teacher in his day but also as one of its master communicators. And I’m convinced that a key part of his skill was his delivery, and particularly, his willingness to employ not only a part of his vocal range, but the whole of it. He put great care into not only the content of his messages, but also the delivery. He had mastered not only the art of preparing a sermon, but also the craft of delivering it. We’d all do well to learn from him.

(Further to this sermon, see “How R.C. Sproul Blessed the Church by Preaching the Curse” in my Great Sermon Series.)