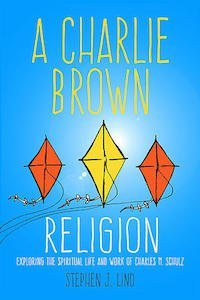 Like countless millions of people of my generation (and the one before and the one after), I grew up reading Peanuts. I loved reading stories and gags based on Charlie Brown and his gang. Charles Schulz had a gift for creating lovable characters and for communicating real ideas through the simplest medium—three or four small squares on newsprint. One thing that always fascinated me about Schulz was his references to the Christian faith. Hundreds of his strips and many of his television specials included subtle and sometimes blatant quotes from the Bible and musings on faith. Why did he include these? Was he a Christian attempting to share his beliefs through his medium or did he just find the Bible an interesting and inspiring work of literature?

Like me, Stephen J. Lind grew up in a Christian home, reading and enjoying Peanuts. He, too, had an interest in Schulz’s religious beliefs. And he has just released A Charlie Brown Religion, a fascinating spiritual biography of Charles Schulz.

This book concerns the thematic thread of religion in Sparky’s life and work. It does not have much to say about his love for hockey, golf, or chocolate chip cookies (all of which were important in various ways to him), but the book has plenty to say about the importance of Charles Schulz’s faith. The reader of this book should not see such a focus to be an indication that Schulz’s life was entirely consumed and driven by religious thought. It wasn’t. Yet such thought was deeply interesting and personally important to him, with a breadth and depth of context and performance that more than justifies a complete volume devoted to its history.

This work tells the story of Schulz’s life and times while keeping the focus on his faith. His faith was as complicated as the man himself and developed a great deal over the course of his life. Lind says, “One might see this book as weaving together answers to two primary questions—‘Was Charles Schulz a religious man?’ and ‘Is there really much religion in Peanuts?’ The simple answer to both of those questions is ‘Yes.’ But the simple answer is rarely the truest answer in history, and you may find that the questions themselves need challenging as we search for thicker answers.”

Schultz was raised in a family that put little stock in religion. As a young adult he came into contact with members of a Church of God in Minnesota and eventually professed faith in Jesus Christ. “He was fully committed to his spiritual beliefs, having developed what others in the church might describe as a ‘personal relationship’ with God through his faith in Christ, but Schulz had not yet developed his own personal spiritual voice. Instead, the language of the Church of God would provide the structure for his thought.” He came to love the Bible and rose to a leadership position within his church, often leading Bible studies, preaching, and doing street evangelism. “Over the years, Sparky [his nickname] would mark nearly every page of his Bible with a pencil or pen, underlining meaningful passages, transcribing timelines, and circling key words, so much that he would naturally forget what had inspired him to do so for certain passages. He filled the margins with explanations drawn from his commentaries and scrawled out personal insights in the blank space left at the end of an Old or New Testament book.” He later moved to California where he joined a United Methodist Church and became active as a Sunday school teacher.

Through this time he was gaining fame as the creator of Peanuts, quickly rising to become the world’s most popular cartoonist. From the beginning, he incorporated spiritual themes into his comics, sometimes quoting the Bible directly. Most famously, he had Linus quote an extended passage from the Bible in A Charlie Brown Christmas.

But sometimes things are not as simple as they seem. Schulz married Joyce Halverson who had no interest in religion and who refused to attend church with him. By their twentieth anniversary their marriage was in trouble and Schulz was engaged in an extra-marital affair. His marriage and affair both ended, and he soon re-married, this time to Jeannie Clyde to whom he would remain married until his death. Like Joyce, Jeannie had no interest in the Christian faith. By this time Schulz was no longer attending church and had lost much of his early enthusiasm for the Bible. Lind speculates “that within the tumult of a failing marriage and while in the midst of a private romantic affair, he no longer felt comfortable leading a study of the Bible.” He soon began describing himself as a “secular humanist,” though Lind points out that “Schulz’s statements reflected something more like a biblical humanism—merely a loosening of the already open, thoughtful faith that he had held since before leaving Minnesota. It was not a reversal of his faith, nor was it a signal of a personal religious crisis.” But it was also a clear sign that he did not hold to orthodox Christian beliefs. Over time, he came to hold to something closer to universalism, believing “there were others who were part of that Kingdom without even knowing it, without believing in Jesus. They were worshipping God through their heart attitudes and their merciful actions, regardless of their theological beliefs.” He died in perplexity and despair, grieving that he had not been given more years to live.

And yet through all of this evolution of his beliefs, or perhaps the clarifying of his existing beliefs, Schulz continued to share parts of the Bible through his work. At a time when culture, and especially entertainment culture, were openly hostile to Christianity, Schulz would include references to the Bible and have Linus boldly recite the meaning of Christmas. Even today, millions gather around their television sets to hear this monologue. While Schulz personally turned away from many core Christian beliefs, he at the same time brought Christian ideas back into the cultural mainstream.

A Charlie Brown Religion is as interesting a biography as I have read this year. It is just long enough to do justice to its subject without adding too much detail, and it moves at just the right pace. It describes a man who found joy and comfort in Christian beliefs, but who never fully appropriated those beliefs—not to the fullest degree. Attempting to understand his faith and its place in his life is equal parts perplexing and fascinating.