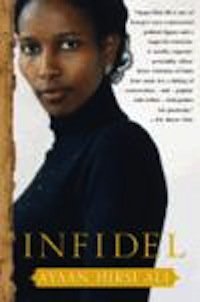 Buy from Amazon
Ayaan Harsi Ali is one of Europe’s most controversial political figures, even if she is one who has since relocated to America. One of TIME Magazine’s 100 most influential people in the world, Ali is the author of a bestselling biography and the writer of a controversial movie. When her film Submission was screened in Holland, it led to murder of Theo van Gogh, it’s producer. As van Gogh cycled to work one morning, Muhammad Bouyeri shot him several times, then nearly decapitated him and stabbed a five-page letter into his chest. The letter was addressed to Ali. The film and the book have forced her to live in hiding and under constant protection.

Infidel is her story, describing her life from her birth in Somalia to her childhood in Saudi Arabia, Ethiopia and Kenya, and her eventual escape to Holland. She eventually forsook her faith and now considers herself an atheist. From the time she left her faith her life has been in constant danger and she has been the recipient of many death threats. After immigrating to Holland, Ali was elected to the Dutch parliament and took a daring stance on immigration and the spread of Islam in Holland. She sees Islam as a force that seeks to subjugate all of Europe (and eventually all of the world) and one that will stop at nothing to achieve its ends. A scandal regarding her claim of political asylum led to her removal from the Dutch parliament, but she continues to exert her influence indirectly.

Infidel is a very interesting biography and one that shines light into Islam. Ali describes this religion and many of its most horrific manifestations—female circumcision (more commonly and more rightly known as Female Genital Mutilation), systematic spousal abuse, forced marriage, polygamy, and all manner of social injustice. Through her experiences in Saudi Arabia, at the very heart of the Muslim world, and through her experiences in Somali, one of the epicenters of the harshest, most brutal manifestations, she describes Islam at its worst (which, she would argue, is also its most faithful manifestation). She does this not to write a good or compelling biography, but to share what she feels is a grave international danger and one that is too often overlooked.

There were many aspects of the book that stood out to me. I found it particularly interesting and thought-provoking in its description of Islamic spirituality. The Bible makes it clear that humans were made to know and to treasure God, depending on Him for His grace. Yet, as we feel into sin, this relationship was ruptured and now humans invent all manner of ways to supposedly gain favor with God. In Islam, as with every other man-made religion, this amounts to good works. In her descriptions of Islam’s adherents, I can see their desperation to know some (any!) sense of peace. Yet they live their lives hoping to find some kind of assurance that God can or will accept them. They never do. Instead they continually strive to impress God with their own goodness. Truly grace is a concept foreign to most of the world’s religions.

Though much of what Ali believes about religion and much of what she proposes in politics and social areas would be in opposition to the Bible, I nevertheless found much to think about in this book. I enjoyed reading it and am glad I did. Her perspective is a valuable to the increasing number of voices warning the world to watch out for the rise of the Muslim crescent.