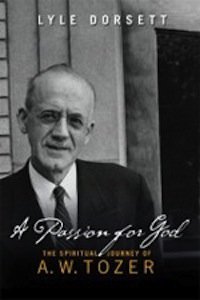 Buy from Amazon
A.W. Tozer is a man whose ministry has long fascinated me. A man who held closely to biblical, Protestant theology, he was also a man who loved the old Catholic mystics. He had little formal education, yet had the ability to hold the most educated of men and women at rapt attention. He had a single-minded devotion to Christ and the highest respect for the Scriptures. Reading A Passion for God has only increased my fascination with him, for here we see more strange and seemingly irreconcilable opposites. Biographer Lyle Dorsett has written a study of the man that deals as honestly with his faults as with the areas that are laudable. And in this case the faults are almost shocking.

Tozer was a man who loved Scripture and loved nothing more than preaching its truths to all who would listen. “A.W. Tozer heralded biblical truth. He loved the Bible and unflinchingly preached what he believed people needed to hear, regardless of what they wanted.” Yet he was a man who neglected the mission field in his home. “On and off over the years, Aiden exercised his role as head of the family by encouraging times of family devotions. These never lasted more than a few weeks. As one son explained, the children just did not want it and they were seldom all together for extended periods in any case.”

Tozer was a man who dedicated himself to reading, study and prayer and who delighted to be in the presence of God. “There is no way to measure the hours he spent in a typical day or week reading books and wrestling with ideas, but it was substantial. In a similar vein, we know that he increasingly devoted many hours each week praying, meditating on Scripture, and seeking deeper intimacy with the Lord Jesus Christ. During the 1930s Tozer read voraciously, and he also developed a magnificent obsession to be in Christ’s presence–just to worship Him and to be with Him.” Yet he was a man who was emotionally and spiritually distant from his own wife. “By early 1928 the Tozers had a routine. Aiden found his fulfillment in reading, preparing sermons, preaching, and weaving travel into his demanding and exciting schedule, while Ada learned to cope. She dutifully washed, ironed, cooked, and cared for the little ones, and developed the art of shoving her pain deep down inside. Most of the time she pretended there was no hurt, but when it erupted, she usually blamed herself for not being godly enough to conquer her longing for intimacy from an emotionally aloof husband.”

These strange inconsistencies abound. Tozer saw his wife’s gifts for hospitality and encouraged her in them; yet he disliked having visitors in his own home. He preached about the necessity of Christian fellowship within the family of Christ; yet he refused to allow his family or his wife’s family to visit their home. For every laudable area of his life there seemed to exist an equal and opposite error. This study in opposites leaves for a fascinating picture of a man who was used so greatly by God, even while his life had such obvious sin.

Though certainly not an exhaustive biography (weighing in at just 164 pages before the indexes and appendices) A Passion for God is nevertheless a good and valuable one. Those who have enjoyed Tozer’s writings will find here the life of a man who can and should be much admired for his deep spirituality and for his overwhelming love for Scripture. They will find here also the sad reality that Tozer, as have so many men before and after him, was willing to sacrifice his family on the altar of ministry. They will wrestle with the great irony that as Tozer grew closer to his Savior he seemed to grow more and more distant from his wife and family. His life stands as both an inspiration and a solemn warning.