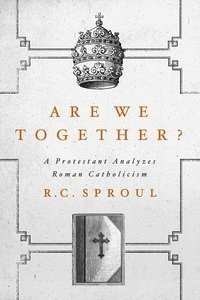 Buy from Amazon Buy from WTS Bookstore
R.C. Sproul has a long history of making a stand for truth. He has an equal history of standing firm against error, using his ministry platform to refute errors that are seeping into the Evangelical church. On several occasions he has reacted to those who have sought to minimize the differences between Protestant theology and Roman Catholic theology. Faith Alone and Getting the Gospel Right are both insightful looks at the critical importance of affirming and protecting the Reformation gospel of justification by grace alone through faith alone. These books were largely a response to “Evangelicals and Catholics Together” and “The Gift of Salvation” (ECT 2).

While ECT may seem like ancient history, there are many Protestants today who continue to minimize the differences between Protestantism and Catholicism, even going so far as to say that the Reformation is over and that it is time to reunite with Rome. Others may not go quite that far, but they still believe that the differences are not significant enough to prohibit a great deal of unity. “The Manhattan Declaration” was just one recent attempt to find common cause on issues such as abortion and traditional marriage. With such efforts in mind, Dr. Sproul returns to the fray with Are We Together? A Protestant Analyzes Roman Catholicism.

He makes his purpose clear in the book’s opening pages: “In this book, I have a simple goal. I want to look at Roman Catholic teaching in several significant areas and compare it with Protestant teaching. I hope to show, often using her own words, that the Roman Catholic Church has not changed from what it believed and taught at the time of the Reformation. That means that the Reformation is not over and we must continue to stand firm in proclaiming the biblical gospel.” He means to show that the gospel itself is at stake and to do this he looks at six core doctrines in which Catholicism varies from the clear teaching of Scripture: Scripture, justification, the Church, sacraments, the papacy and the role of Mary. He closes with a reflection on how Protestants should now relate to Roman Catholics without minimizing theological differences.

What I have long appreciated about Dr. Sproul’s books on Catholicism is that he is charitable and respectful in his tone, always careful to show where Protestants have erred in their understanding of Catholicism and ensuring that he properly represents even those positions that he does not hold to. Thus he looks at Catholic doctrine as it is explained by its foremost theologians and official documents. Having allowed Catholicism to explain itself, he goes to Scripture to show where it has strayed.