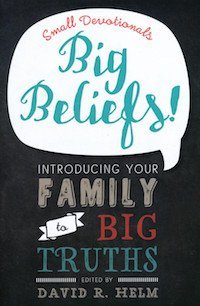 As a family we are committed to reading the Bible together. For years we have made it a near-daily habit to spend at least a few minutes together in family devotions. Our normal pattern is simple as simple can be: First thing in the morning we read a passage, we talk about it briefly, and we pray. It is a sweet time together and one I’m convinced is of outsized importance to our spiritual and relational health.

Sometimes, though, we like to interrupt the pattern or add another element—usually by reading a devotional book. Surprisingly, we have had a lot of difficulty finding books that are written in such a way that they are easy for families to read aloud together and that are theologically-sound. It was a bit of a thrill, then, to receive a copy of the new book Big Beliefs!: Small Devotionals Introducing Your Family to Big Truths, edited by David Helm. This book looked like just the thing and an examination of its content and a few trial runs quickly proved it. We have begun reading it together.

In his introduction, Helm describes the book’s background: “One of the exalted privileges of the church is the opportunity to help young and eager minds to get an early grasp on Christian doctrine. At Holy Trinity Church in Chicago, we have a commitment to provide fresh gospel resources for our many young families who are attempting to instruct their children in the Christian faith.” They have done this through Helm’s book The Big Picture Story Bible which we read and re-read to our children and through the accompanying The Big Picture Devotional. And now they are extending it through Big Beliefs!. It represents “a more recent attempt to teach theology systematically to young people. Written for children ages seven through twelve, the devotional guide traces the Westminster Confession of Faith, giving a brief overview of each of the Confession’s thirty-three doctrinal headings one lesson at a time.” The entire Westminster Confession of Faith is printed at the end for those who wish to dive a little deeper.

The format is simple and effective. There is a scripture passage to read, a devotional that is a single paragraph long, and a couple of questions for discussion. The writing is perfect for the recommended age range though it can easily enough be extended upward or downward as necessary. There are only five devotionals per week which means you can miss some days and not fall hopelessly behind. However, since the devotional follows the Confession rather than the calendar, it does not need to begin in January or end in December.

I am Baptist rather than Presbyterian like Helm, Holy Trinity Church, and the Westminster Confession of Faith, so I was interested in his handling of the distinctly Presbyterian beliefs. I was pleasantly surprised to see that the lessons were generally written on common ground. So, for example, the chapter on baptism does not press infant baptism but reads in such a way that both Baptists and Presbyterians can affirm it. If I have a complaint about the book it would simply be that it assumes its readers are American. So, for example, sentence one of devotional one says, “Abraham Lincoln was one of the greatest presidents our nation has ever known.” But, of course, that is just a small matter that is easily circumvented by the reader.

Let me provide a sample devotional. This is from day four and requires a reading of Psalm 145.

It is followed by these two questions for interaction and reflection: “The writers of the Confession have taught us about the Bible, and now they are teaching us about God.” And, “Why do you think they are doing it in this order? What does Psalm 145 teach us about God?”

All-in-all, I expect that many families will eagerly buy and use Big Beliefs!. In fact, I recommend it! It fills a surprising gap in the current literature and does so very well. It’s an excellent little book and I look forward to reading it to and with my family in the months to come.