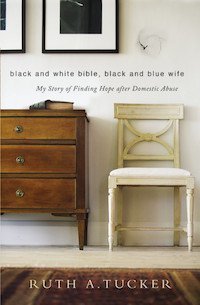 Now here is a provocative title for a book: Black and White Bible, Black and Blue Wife. The subtitle brings a measure of explanation: “My Story of Finding Hope after Domestic Abuse.” Ruth Tucker’s new book is really two books in one—it is her harrowing account of being married to an abusive man and, at the same time, her critique of complementarian theology and an associated call for full egalitarianism. In my assessment it succeeds well as the first book but falls prey to significant flaws as the second.

Before I go any further, let me pause to define those key terms. “Complementarianism is the theological view that although men and women are created equal in their being and personhood, they are created to complement each other via different roles and responsibilities as manifested in marriage, family life, religious leadership, and elsewhere.” “Egalitarianism asserts that there should be no gender-based role distinctions or limitations placed on women in the home, church, or society. According to this view, women can serve as pastors in light of passages like Galatians 3:28.”1 With that in mind, here is my review of Black and White Bible, Black and Blue Wife.

In 1967 Ruth Tucker fell in love. She was at Word of Life Island in the heart of the Adirondacks when she met a tall, handsome young man who swept her off her feet. Romance blossomed and was followed by walks, talks, letters, and courtship. Even at this time she began to notice concerns, little warning signs that perhaps this man was too demanding and controlling. But in the blush of young love she overlooked his flaws and soon they were married. They settled into life together, she as an academic and he as a pastor. It did not take long before she was exposed to all manner of abuse—emotional, spiritual, physical, and sexual. For 19 years she endured this marriage before she finally escaped. They were later divorced. She tells this biographical account throughout the book, pausing often to draw lessons from it.

Tucker’s story raises a host of important issues and concerns about matters of abuse. I appreciated her bravery in telling her story and even exposing herself to critique by explaining how at times she failed to protect others from her ex-husband’s crimes. I gained insight from her explanations as to why she did not simply leave this man and why she did not report him to church or civil authorities. I benefited from her moving reflections on physical and sexual abuse in marriage and her willingness to ask and answer very difficult questions. I was shocked and saddened by the way too many Christians refused to help her or the way they dispensed the worst and most judgmental kind of counsel. Her story of suffering is, I fear, all too common and highlights one of the church’s great failings. As a Christian and a church leader I gained important knowledge from reading her book and I believe it will help me grow in compassion and understanding toward those who are in similar situations. For all of that I am grateful.

But when it comes to Tucker’s case against complementarianism, I simply cannot agree with her. Her case suffers from a number of weaknesses.

The first weakness is related to the fact that to some degree Tucker defines an entire theological understanding out of her own experience. She understands her ex-husband to be a complementarian and in that way an exemplar of this theology as it takes root and advances to its logical conclusions. Her understanding of complementarianism is inextricably bound up with her own experience, yet I found her marriage unrecognizable as a truly complementarian union. Her ex-husband was an abuser, manipulator, and pervert, a man who interpreted the Bible in black and white ways so he could justify abusing his wife. She gives no reason for us to believe that he was even a true Christian. In this way he represents a gross distortion of manhood rather than a faithful complementarian. Complementarians stand united in their firm opposition to this kind of “hyper-headship” as demonstrated in this important sermon by Jason Meyer.

A second weakness is that she does not deal well with the various texts that challenge her egalitarian viewpoint. She offers short responses to important words like “helper” and “head,” but offers no compelling engagement with the complementarian understanding of many key biblical texts. In fact, the proof she offers for her position is often emotional rather than biblical. “Imagine saying that African Americans are fully equal to whites before God, but they are not permitted to hold church office and must be subject to Caucasians. The claim would be ludicrous. And so it is regarding gender.” But unless race and gender are the same category, this is an invalid means to advance her argument. It succeeds emotionally but fails biblically.

A third weakness is that she conflates egalitarianism and the right to divorce as if only egalitarian theology can grant a woman the right to escape from a situation like her own. And then, even as she implies this, she fails to deal with the texts on divorce, texts which Christians must take seriously. In that way she makes out her case for her divorce from her ex-husband contingent on egalitarianism. But I, as a convinced complementarian, affirm her right to divorce her ex-husband and even affirm the wisdom she displayed in doing so. He had shattered his vows, giving her every right to officially sever the marriage. Complementarianism offers protection and escape to the abused wife.

A final weakness is that Tucker finds evidence of her understanding of equal marriage even where it may not exist. For example, she offers a brief portrait of the marriage of Martin Luther and Katharina von Bora and frames it as an egalitarian marriage “for all practical purposes.” She does the same with Martyn and Bethan Lloyd-Jones and several others. Yet she offers no compelling evidence that these people were, in fact, egalitarian. To the contrary, I believe she actually shows fine examples of complementarian marriages—men who valued their wife’s gifting, who affirmed their equality as image-bearers, who loved their wives in intimate and sacrificial ways, but who also led their families.

I understand that we are all products of our experiences and understand how Tucker’s experience prompts her to now be suspicious of the categories of leadership and submission. After all, these were used to manipulate and abuse her. Her suspicion and her response are understandable. But that does not make them right. My encouragement to her and to others who have experienced such trauma is that they did not experience complementarian marriage. They did not experience the love of a husband who is willing to live and die for the good of his wife, who is committed to loving her just as Christ loved the church. Rather, they experienced abuse. They experienced a dangerous distortion, an ugly perversion, of something that is meant to be beautiful.

In the end, Black and White Bible, Black and Blue Wife makes a case for egalitarianism but deals too little with the biblical text for it to be a strong case. It makes a case against something as well, but not against complementarianism, not as I hear it described, not as I see it lived out in my home and so many others’. I am glad I read it but cannot give it my recommendation.