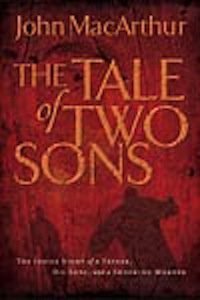 Buy from Amazon
The story of the Prodigal Son is undoubtedly among the best-known and most highly-favored tales of all time. Even those who do not know the story itself are familiar with its outline or some of the words and phrases that arose from its King James translation. A powerful and heart-rending story, it is unforgettable to all who hear it. John MacArthur, with no hyperbole, says it is “hands down, the greatest five minutes of storytelling ever.” His most recent book, A Tale of Two Sons, is an examination of this, Jesus’ most memorable and most powerful parable.

Though most people know something of this parable, very few really understand it. We see this even in the name assigned to it—the Parable of the Prodigal Son. The story, after all, was not meant to be primarily a feel-good tale of a father’s love for his son, though certainly it is that, too. Rather, “it is a powerful wake-up call with a very earnest warning.” The purpose of the parable, as Jesus delivered it, centered on the elder brother—the very character who is so often overlooked in popular re-tellings of the tale.

In the book’s opening chapter MacArthur makes clear the central and culminating lesson of the parable: “Jesus is pointing out the stark contrast between God’s own delight in the redemption of sinners and the Pharisees’ inflexible hostility toward those same sinners.” Though the younger son is important to the story, his redemption is not the main point. Rather, this parable is to serve as “a mirror for every human heart and conscience” that will reflect either God’s love for fallen sinners or a human hardness and arrogance that would deny that such hardened sinners could ever know His love.

A Tale of Two Sons is classic John MacArthur. If you have read his other books, you’ll know what to expect here. It is consistent, methodical exposition of the passage and one that never misses an opportunity to provoke application. It looks to the past to provide historical context and setting that explain many of the story’s elements that would otherwise be obscure to people reading 2,000 years later. The book looks first at the parable in its context and then at the story through a wide lens. It then turns to the younger brother, to the father, and finally to the elder brother. It concludes with an Epilogue that describes the shocking real-life ending to this parable—the very conclusion that is so often overlooked in modern adaptations and explanations of the story. Though the story itself has an open ending and Jesus never told whether or not the elder brother repented and discovered the joy of his father, the wider biblical context makes the ending clear. The elder brother, represented by the Pharisees, was hardened in his sin and turned on his father (who represents Christ). The son, in his unrepentant hardness, put the father to death. It is a tragic and sobering ending.

This book is a fine examination of the tale and an powerful explanation of its importance to each of us today. It is suitable for any reader—believer or skeptic, laity or clergy. Read it and you will be blessed!

I am not certain when this book will be widely available. It has been printed, though, and is now being shipped. So it should be available in the very near future.