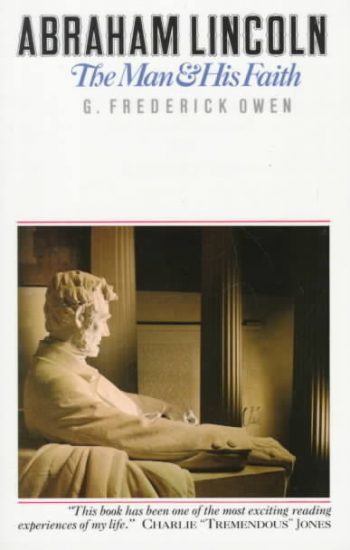 To study Abraham Lincoln is to study character. I would be hard-pressed to think of a person who lived since the time of Christ that so fully embodied the qualities and character of a Christian. He was a man who lived with humble faith and firm convictions and seemed always to direct himself by what was right.

Perhaps no other character in history other than Jesus has been written about as much as Abraham Lincoln. There are literally hundreds of books that trace his life, from its humble beginnings in the backwoods of Kentucky to its conclusion at the hands of an assassin. This book does not attempt to provide an exhaustive biography of his life. Rather, it traces the growth of Lincoln as a Christian. It traces the roots of his faith in the teachings of his mother and shows how his faith was tested and sharpened through his life. It shows how the wisdom which made him famous was godly wisdom, learned through a lifetime of humility and submission to God.

Perhaps the most striking thing about Lincoln’s life is that while he lived a life of moral purity that would be the envy of man Christians, for the greater part of his life he was not a believer. It was only near the end, riding across the battlefield at Gettysburg to deliver his famous address, that he could say he fully dedicated himself to God. Though he was a good man and a moral man, he did not actually become a Christian until that time. Through his life prior to that time it was his mother’s faith and her teaching that had carried him through life’s trials and temptations.

The author’s extensive research has led him to pivotal moments in Lincoln’s faith. The most important influence was his mother, who raised Lincoln with awe for and respect of the Bible. His mother, who died when Lincoln was just a young boy, made him promise that he would live as she had taught him and to keep the Lord’s commandments. This promise shaped his life as many times in life he overcame temptation by thinking of his mother’s words. Other pivotal moments in his life were the death of his fiancée and the later death of his son. Both of these events shook him to the core of his being, but God sent people into his life to comfort him and minister to him during these times. In the end, we see, these events left him stronger and helped lead him to making a commitment to God.

When we trace Lincoln’s life we can see how God was preparing him for the task He had appointed to him – the task of saving the nation. We see how the development of his character, his faith and his relationships all led to him becoming a great statesman. We see how these elements brought him through this time and how he stood firm in them until the time of his death. It was these elements that made him one of the most beloved men in the nation’s history.

This book is well-written, well-researched and well-documented. I give it my highest recommendation.