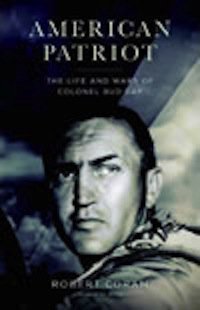 Buy from Amazon
George “Bud” Day is the most decorated officer in the modern history of the U.S. military, having won (this is a chest seriously full of medals and ribbons) the Medal of Honor, Air Force Cross, Distinguished Service Medal, Silver Star, Legion of Merit, Distinguished Flying Cross, Bronze Star Medal for Valor with two Oak Leaf Clusters, Bronze Star Medal for Merit, Purple Heart with three Oak Leaf Clusters, Air Medal with nine Oak Leaf Clusters, National Order of Vietnam, Vietnam Gallantry Cross with Palm, and Prisoner of War Medal). His military career began in 1942 when, despite being under-sized and under-age, he managed to work his way into the U.S. Marines. He served for almost three years in the South Pacific, never seeing combat. After the war he returned home and studied law, eventually graduating with a degree in that discipline. In 1950 he joined the National Guard and, when called up a year later, applied to fly fighter jets. He soon became one of America’s most skilled pilots and, after being promoted, decided to dedicate his career to the Air Force.

In 1967, with the war in Vietnam raging, he was made commander of a secret squadron of F-100 jets and was tasked with Forward Air Control. It was the job of this select group of pilots to fly low to the ground and to seek out and mark targets that other jets could destroy. On August 26 of 1967, his plane was shot down and he suffered serious injuries while ejecting. He was quickly captured but escaped at the first opportunity available and became the only soldier to journey all the way to South Vietnam. Sadly, just moments from reaching the safety of American lines, he was spotted by a North Vietnamese patrol and shot in the leg and hand. He was dragged back into captivity where, for five years he was held, constantly being brutally tortured. While in the “Hanoi Hilton” he met John McCain and the two of them developed a lifelong friendship. He was finally released in the spring of 1973. Three years later he was honored with the Medal of Honor, the highest military decoration awarded by the United States.

American Patriot, a new book by Robert Coram, tells the story of Bud Day’s life. It begins with his upbringing in a harsh and poverty-stricken home in Sioux City, Iowa and continues to the present day (Day is, after all, still alive). Though Day is best-known for his contributions during the war, his years of public service continue even today. When President Clinton’s government passed a law scrapping the life-long health insurance that had been promised to veterans, Day fought on behalf of the hundreds of thousands of vets and won a stunning victory. He also campaigned against John Kerry whom he regards as a traitor because of his inflammatory and untruthful comments during the Vietnam War (and it is worth nothing that Day’s torturers used Kerry’s testimony against Day when torturing him) and appeared in advertisements for the Swift Boat Veterans for Truth. Even today, at the age of 82, Day continues to work as a lawyer in Florida, often representing members of the military.

To be honest, I read this book as a form of light distraction because of a good deal of heavy reading I have been doing. It served its purpose well. Day has lived a fascinating life and truly is a patriot. His highest belief seems to be in the value and importance of America and he looks with unforgivable disdain on anyone who would become a traitor to his nation. He has dedicated his life to serving his country and reacts with anger and outrage to those who violate her highest ideals.

While the book is largely well-written, it is clearly a favorable biography and may even almost dive occasionally into the realm of hagiography. The author turns too often to hyperbole and melodrama when considering Day’s virtues while passing quickly over his vices. The Prologue may be the most melodramatic prose I’ve read this side of high school and made me wonder if I’d be able to finish the book. Thankfully it was short-lived and got much better after that. I should note that quite a number of words of the four-letter variety are used throughout the book (including a multi-paragraph exposition of the number of ways pilots use the word “s–t.”). It is, after all, a book about a fighter pilot, a breed known for his arrogance, self-assuredness and foul mouth. Day is not the theologian or hero of church history I typically read about in biographies!

American Patriot was a good read and one that isn’t entirely irrelevant as the 2008 Presidential campaign begins to heat up. Veterans played a critical role in the last election and Bud Day served as a leader. I wouldn’t be surprised if his face and his name are in the news again as a new election nears. This book is a good and interesting read for anyone with an interest in military history.