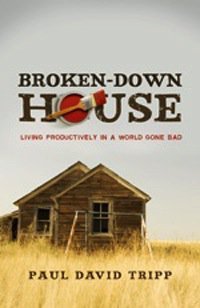 Mark Tubbs is a good friend and my co-laborer over at Discerning Reader. If you have enjoyed that site recently, thank Mark more than me. As Managing Editor, he is heavily involved in the day-to-day management of all that happens there. Because I am on vacation this week, I asked if he would mind if I borrowed a review he had published at Discerning Reader. It is for Paul David Tripp’s brand new Broken-Down House. I trust you’ll enjoy the review and consider purchasing the book!

Become a Patron
Using the concept of the house as a metaphor for life isn’t a novel idea. In Scripture, both the psalmist and Christ himself employ the metaphor. More recently, author William Paul Young situated the majority of the action of The Shack in a ramshackle structure in which the Trinity helps the main character to process the tragic events of his life. Even the secular world has employed the metaphor, such as in the 2001 film Life as a House.

Paul David Tripp, whom I readily disclose as one of my favorite Christian authors alongside John Piper, puts the Christian-life-as-a-house metaphor to effective service in his newest book, Broken-Down House: Living Productively in a World Gone Bad. Special mention ought also to go to editor Kevin Meath, who strengthened the manuscript for publication.

Not to get too far ahead of ourselves, but the way in which Tripp opens the penultimate chapter is instructive regarding the nature of his book:

Tim had his life organized into neat little categories–work, family, church, friendships, leisure–and he was careful to give proper attention to each one.

Similarly, whereas many Christian books focus in on a single aspect of the Christian life as though it were a separate compartment, Broken-Down House is comprehensive in its scope. A biblical theology of the Christian life, if you like. I cannot do better than to quote Tripp sketching out the architecture of this book:

Well, sin has ravaged the beautiful house that God created. This world bears only the faintest resemblance to what it was built to be. It sits in slumped and disheveled pain, groaning for the restoration that can only be accomplished by the hands of him who built it in the first place. The Bible clearly tells us that the divine Builder cannot and will not leave his house in its present pitiful condition. He has instituted a plan of restoration, and he will not relent until everything about His house is made totally new again. That is the good news.

The bad news is that you and I are a living right in the middle of the restoration. We live each day in a house that is terribly broken, where nothing works exactly as intended. But we do not live in the house by ourselves. Emmanuel lives here as well, and he is at work returning his house to its former beauty. Often it doesn’t look like any real restoration is going on at all. Things seem to get messier, uglier, and less functional all the time. But that’s the way it is with restoration; things generally get worse before they get better.

The greatest strength of this book lies is its recognition of the bifurcated reality of life: the world that we live in is broken and the bodies that we live in are broken. Indeed, Tripp goes much further on the second count, explaining that our very selves are irreparably broken by sin, unfixable by anyone but the master builder, God himself. Tripp roots his theology in Scripture, pointing out that in all its sweat, blood, guts and glory, “the Bible is painfully honest about real life in a fallen world. This honesty is a sign of God’s love.”

I advise you to use the final chapter to do what its title suggests: “Examine Your Legacy.” It is packed with lengthy passages of Scripture and warrants extended time spent on every section. You’d be doing yourself a disservice and the book an injustice to rush through it.

Broken-Down House is a book for everyone and everything. Everyone in that no one is exempt from its message, and everything in that there is not a single aspect of the human condition (that I could think of) absent from this book. Even more importantly, it is a piece of work whose cornerstone is Christ, and whose chief architect is God himself. Read it and weep, read it and rejoice.