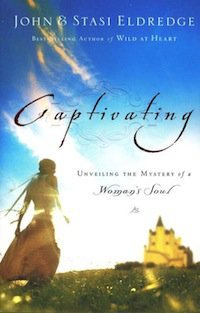 When I read and review a book I attempt to do so as objectively as possible. After all, each book should be taken on its own merits. It is not entirely fair to cast presuppositions gained from previous books onto an author’s later works. It is not unusual for an author to come to better or worse understandings as his life progresses. A person whose theology once seemed rock-solid, could, unfortunately, write a book later in life that seemed to be anything but orthodox. I say this to preface my review to John Eldredge’s latest book, Captivating. I attempted to be as objective as possible when reading the book, but found it to be nearly impossible. The book was clearly designed to ride the wave of Eldredge’s previous success, and most notably his best-seller Wild at Heart. Wild at Heart is mentioned on the front cover (“Best-Selling Author of Wild at Heart“) and the back (“What Wild at Heart did for men Captivating will do for you”). It was mentioned again in the second sentence of the introduction and was often quoted, even at length, throughout the book (as was The Sacred Romance). There is even an 8-page excerpt of it at the back of the book. While this may provide credibility to those who enjoyed the first book, I found that it cast a shadow over Captivating.

John Eldredge has gained prominence within Christian circles as a leading author who addresses issues of concern to men. He has written several best-selling books. Wild at Heart, the most popular of these, is also the most controversial. There have been extensive reviews and examinations of the book and many have expressed concern that it contains consistently poor theology. Captivating marks a new stage in Eldredge’s ministry, as it is written specifically for women. The back cover tells us that “What Wild at Heart did for men Captivating will do for you.” It promises to “unveil the mystery of a woman’s soul.” This book is co-written by Eldredge’s wife, Stasi, and represents her first publication.

I have little doubt that in a short while we will have many detailed, critical analyses of this book available to us – reviews that will be far more detailed and insightful than any I could write. I do not intend to write an extensive review, primarily because of the subject matter. I could address the theology of the book, but would have no comparison to the subject matter. After all, I do not read many books geared specifically for women. Perhaps I should. Regardless, this book is so closely tied to Wild at Heart that many of the criticisms levelled at that book will apply also to this one. In Fool’s Gold, edited by John MacArthur, Daniel Gillespie writes a lengthy critique of the book and levels four main charges at it, saying it has an insufficient view of Scripture, an inadequate picture of God, an incomplete portrait of Christ and an innacurate picture of man. Those all apply to Captivating as much as they did to Wild at Heart.

Like Wild at Heart, this book is built around three premises. Every woman wants to be romanced, to play a role in her own adventures and to display beauty. The book is roughly divided along these lines. “The longings God has written deep in your heart are telling you something essential about what it means to be a woman, and the life he meant for you to live. Now we know – many of those desires have gone unmet, or been assaulted, or simply so long neglected, that most women end up living two lives. On the surfce we are busy and efficient, professional, even. We are getting by. On the inside women lose themselves in a fantasy world or in cheap novels, or we give ourselves over to food or some other addiction to name the ache of our hearts. But your desire is still there, crying out to be set free, to find the life your desires tell you of. You can find that life – if you are willing to embark on a great adventure” (page 19). The adventure is written on the pages of this book.

In place of an overall critique, allow me to express a few of my concerns with this book:

For sake of brevity I will cease. While some of these are only minor concerns, others are clearly more significant. Overall, this book is little more than Wild at Heart rewritten for women – with a soft, feminine cover in place of the harsh, masculine one. Like its predecessor it contains far too much poor theology and draws as much from popular culture as it does from the Word of God. While there was some benefit for me in reading about the hearts of women, there must be better resources available that would do this in a more biblical manner. Despite the risk of stating the obvious, I would caution Christians against reading this book.