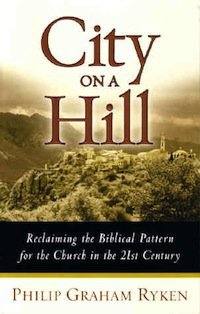 I wonder if it has always been true that when people write about the church they write with sadness, lamenting what the church has become or is becoming. In our day we have the church growth advocates bemoaning the fact that not enough churches engage in full-scale marketing of their churches; we have the Emergent Church leaders lamenting the church’s refusal to adapt to and engage with the changing culture; and we have conservatives calling us to return to the pillars of faith the church once held dear.

I, sometimes reluctantly, find myself predominantly in the third camp, though I sometimes also wonder if we really are doing so poorly. Philip Graham Ryken is also clearly in the third camp. He assumed the pastorate of Ten Presbyterian Church in Philadelphia after the death of James Boice with whom he co-authored the wonderful book The Doctrines of Grace. As if to prove his allegiance, he subtitled this book “Reclaiming the Biblical Pattern for the Church in the 21st Century.” As with leaders of the other camps, Ryken examines the culture and seeks to find ways in which the church can fulfill it’s God-given mandate to be a city on a hill.

This book began with a ministry retreat in early 1999 in which Ryken and the leadership of his church engaged in discussion about being a church that could successfully fulfill God’s mandate in the post-Christian 21st century. When he succeeded Boice as pastor of Tenth, Ryken began his ministry by preaching a series of sermons on the seven committments of his church’s mission statement. These messages form the basis for the book. Because of this they do read a little bit like sermons (which is not necessarily a bad thing).

City on a Hill begins with an introduction to postmodernism. Ryken identifies these post-Christian times as being characterized by relativism and narcissism. In order to combat those forces and to be a remedy to society, the church needs to return to the model of the 1st century church – a church that was modelled on teaching, worshiping and caring. These three forces, when combined, caused the church to grow. Ryken identifies seven objectives for the church: expository preaching, worthy worship, Bible study and fellowship, pastoral care, educational programs, missionary work and service to the church and community. Each of these objectives forms a chapter in the book.

While these objectives are hardly unique, and could as easily be found in a book written by John MacArthur or any of the other Reformed or conservative church leaders, Ryken does something that gives this book great value. He shows how relativism and narcissism negatively impacts each of these seven objectives, and also shows how returning to the biblical model can be an antidote to the influences that pervade our culture. For example, he teaches that in a post-Christian culture, worship becomes less about Scripture, and less about honoring God, while becoming predominantly about the individual. Church becomes a place where needs are met rather than a place where God is worshiped. He teaches that we need a theology of worship to guide our practice so that we can avoid society’s negative influences. In the fifth chapter, which deals with pastoral care, the author teaches that “the revolt against the mata-narrative helps explain why people are so resistant to the gospel. Christianity has a story to tell. It claims to be the story, the story of humanity…However in these post-Christian times, people don’t want to listen to God’s story; they want to make up their own. When they read the script of salvation, they discover that it’s all about God and His glory. But they were hoping to play a bigger part. Hence the postmodern revolt against the meta-narrative, which is really a rebellion against the authority of God” (page 94).

Ryken determines that if we are wise, “we will recommit ourselves to expository preaching, God-centered worship, loving fellowship, pastoral care, costly discipleship, global evangelism, and practical compassion. But none of this will matter unless we recognize our need – our daily need – for the gospel. The church can only be a city on a hill if it confesses its sin and trusts in the crucifixion, resurrection, and intercession of Jesus Christ for any hope of salvation” (page 179).

For the church to succeed in its ministry during the post-Christian era, it must take care that it presents a biblical alternative to the forces of society, all the while ensuring that it does not accomodate them. When church does what it is called to do – to be a city on a hill; a light shining in the darkness – it will give the world what it most needs – the message of life and salvation in and through Jesus Christ.

This is a book that is sure to challenge the reader. It is consistently biblical, returning constantly to the Word of God. It calls the church to return not to the model of the twentieth century, but the model given to us in the Bible. I enjoyed this book and recommend it to others.