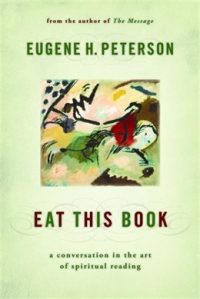 Eugene Peterson believes that the way we read the Bible is as important as the very fact that we read the Bible. “Do we read the Bible for information about God and salvation, for principles and ‘truths’ that we can use to live better? Or do we read it in order to listen to God and respond in prayer and obedience?” To address these questions, Peterson brings us Eat This Book: A Conversation in the Art of Spiritual Reading. It is a rather strange and wandering book in which Peterson meanders through a wide variety of topics having to do with the theme of Scripture. At heart, though, the book is an attempt to convince the reader of the importance of reading Scripture in order to promote life change. Peterson feels this is best done through the ancient practice of lectio divina. In many respects, then, this book is a beginner’s guide to that practice.

In his wanderings, Peterson covers three main topics. He first discusses the impetus for this book and his choice of a title. He discusses “Scripture as form,” looking at the Bible as both story and sentence. He encourages the reader to read the Bible in a way that is spiritually affecting and is more than the mere absorption of words and phrases.

Having laid the foundation, Peterson provides an overview of lectio divina. He breaks the practice into its component parts: lectio, or reading; meditatio or meditation which keeps the memory active in the act of reading; oratio or prayer in which we respond to God; and contemplatio or contemplation in which we live out what we have read, meditated upon and prayed. Throughout the book Peterson suggests that lectio divina is a biblical practice and one that has been practiced since the dawn of the church. This is not strictly true, as it is the product of a particular form of Christianity: Catholic mysticism. The way Peterson presents it is quite innocuous, almost as if he is deliberately avoiding the deeper practices and even potential problems associated with it. If everyone who practiced lectio divina did so just as he lays it out, it would be a practice I would heartily endorse. Unfortunately, this is not the case. Peterson does little to help the reader understand that this is a practice more associated with Catholic mysticism than with Protestantism. Many of the most notable teachers of lectio divina would lead readers into practices that are unbiblical.

In the final section the book takes an unexpected turn into a discussion of translation philosophy, especially as it pertained to Peterson’s task of translation in The Message. In a section entitled “Caveat Lector” (or “let the reader beware”), Peterson shows concern with the response that the Scriptures are to evoke in us. “The words printed on the pages of my Bible give witness to the living and active revelation of the God of creation and salvation, the God of love who became the Word made flesh in Jesus, and I had better not forget it. If in my Bible reading I lose touch with this livingness, if I fail to listen to this living Jesus, submit to this sovereignty, and respond to this love, I become arrogant in my knowing and impersonal in my behavior. An enormous amount of damage is done in the name of Christian living by bad Bible reading” (page 82). This shows, I think, that Peterson is genuinely concerned with how Christians read the Bible. He realizes that, when read with an impure heart or out of poor motives, the Bible can be used to cause all manner of harm. Great damage has been done by those who know the words of the Bible best. Satan himself knows and quotes the Bible. But is the problem with the Bible or with the reader?

Peterson further voices this concern in a metaphor. “The Christian community is as concerned with how we read the Bible as that we read it. It is not sufficient to place a Bible in a person’s hands with the command, ‘Read it.’ That is as foolish as putting a set of car keys in an adolescent’s hands, giving him a Honda, and saying, ‘Drive it.’ And just as dangerous. The danger is that in having our hands on a piece of technology, we will use it ignorantly, endangering our lives and the lives of those around us; or that, intoxicated with the power that the technology gives us, we will use it ruthlessly and violently” (page 81). I do not feel that this is a fair parallel. I know of people, and you probably do as well, who have been simply handed a Bible and been told to read it. They read and were changed. They read and were saved. There is a vast difference between an adolescent who takes the wheel of a car and a man or woman who is given a Bible. While I appreciate Peterson’s concern, what he fails to take into account is the fact that the Holy Spirit works through Scripture as the primary means of changing lives. The metaphor that compares a Bible to a car and an adolescent to a reader is simply not fair or accurate. It gives far too little credit to the work of the Holy Spirit.

It is possible that Peterson feels that the Scriptures are somehow a little bit deficient? That they are not the best way that God could have revealed Himself to us? “There is a sense in which the Scriptures are the word of God dehydrated, with all the originating context removed–living voices, city sounds, camels carrying spices from Seba and gold from Ophir snoring down in the bazaar, fragrance from lentil stew simmering in the kitchen–all now reduced to marks on thin onion-skin paper” (page 88). While this is true, at least to some extent, what Peterson fails to mention is that this is exactly how God intended to give us the Scriptures. God never refers to His Word as “dehydrated” or in any way deficient. Yes, we need to invest time and effort in knowing, studying and understanding them, but we do so knowing that the Scriptures, exactly as they are, are just what God desired that we have. Any fault we perceive in them is a fault within us.

In these three quotations, three of a number I could have referred to, I think we see an important piece of the puzzle that led to The Message. Eugene Peterson feels that the equation of person plus Bible can lead to all manner of hurt and pain and destruction. This is, in many cases, true. Yet it seems, as we will see, that Peterson’s solution is to change the Bible rather than to focus on the people. The Bible is good and perfect and true. It is the people who cause the trouble.

In a chapter entitled “God’s Secretaries,” Peterson examines Nehemiah 8 where the Israelites, having just rediscovered the Scriptures, stand before Ezra as he reads them to the assembly. And as he reads, select Levites “give the sense” of the passages. “‘Gave the sense,'” he says, “did more than merely provide dictionary equivalents to the words that were being read that day. The Levites’ interpretive translation work engaged the lives, the hearts and souls, not just the minds, of the people: at first they wept and then they rejoiced ‘because they had understood the words that were declared to them’ (Neh. 8:9-12). This is the intended end of true translation, to bring about the kind of understanding that involves the whole person in tears and laughter, heart and soul, in what is written, what is said” (page 125). It is interesting and helpful, I think, to compare Peterson’s philosophy of translation to that of the English Standard Version. In the preface to the ESV we read, “The ESV is an ‘essentially literal’ translation that seeks as far as possible to capture the precise wording of the original text and the personal style of each Bible writer. As such, its emphasis is on ‘word-for-word’ correspondence, at the same time taking into account differences of grammar, syntax, and idiom between current literary English and the original languages. Thus it seeks to be transparent to the original text, letting the reader see as directly as possible the structure and meaning of the original.” Note the difference. The ESV seeks, in so far as possible, to bring the original text before the reader. Peterson seeks to bring about the understanding and response of the original reader. The ESV values words while Peterson values response.

We continue with words found almost at the end of the book. Peterson has continued to discuss The Message. He now sets his sights on essentially literal translations, suggesting why he feels they are less useful than a more dynamic translation. “Translation is a complex activity that takes place between a polarity of two questions. The question asked from one pole is, ‘What did she mean?’ ‘What did he say?’ answered strictly on its own terms yields a literal translation. Find the German word equivalent to the English word and that’s it. ‘What did she mean?’ requires an imagination, often a poetic imagination, that brings the ‘world’ of the German text into the ‘world’ of American English…” He quotes Sebastian Brock: “In the case of free translation, it could be said that the original reader is forced to go to the original; or, to put it another way, in the first it is the reader who is stationary, but in the second it is the original” (page 169).

His distaste for literal translation soon becomes more apparent. “In my work as a pastor and writer, teacher and preacher, I began to gather observations and witnesses on the nature of translation, noticing how unsatisfactory ‘literal’ turns out to be and how conveniently it serves as a cover for avoiding the obvious intent of words spoken or written” (page 170). And again, “Preference for the literal has a long life. But I have come to believe that it is an unthinking preference…The language [in a literal translation] is lobotomized–the very quality that gives language its genius, its capacity to reveal what we otherwise would not know, is excised. Extreme literalism insists on forcing each work into a fixed immovable position, all the sentences strapped in a straightjacket” (page 171).

And then, finally, we see exactly what Peterson presented in The Message and why he did so. “[T]he most important question is not ‘What does it say?’ but ‘What does it mean and how can I live it?’ I wanted to gather a company of people together who read personally, not impersonally, who learned to read the Bible in order to live their true selves, not just get information that they could use to raise their standard of living” (page 176).

This philosophy differs substantially from the more literal translations, where emphasis is placed primarily on words, not meaning. With a literal translation we are given, in as much as is possible, access to the original words of Scripture. It is then up to the individual Christian, not a particular class of “translator-interpreters”, to interpret Scripture and to apply it to our lives.

All-in-all, Eat This Book is an interesting read and one that goes a long way to explaining The Message and affirming Peterson’s desire to help others know and understand the Scriptures. Unfortunately, I feel that much of the good may be undone by leading people undiscerningly into contemplative spirituality. While what Peterson teaches is generally sound, he commends the writing and teaching of others who may lead Christians into practices that are far from biblical.