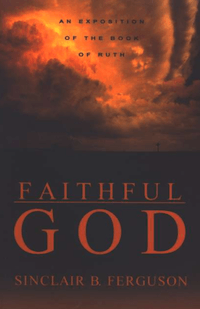 Buy from Amazon Buy from WTS Bookstore
It was only through the providence of God that Sinclair Ferguson’s new book Faithful God came to be. The chapters of the book were originally written as a series of messages delivered at the conference of the Evangelical Movement of Wales in Aberystwyth in August 1996. But the spoken word and the written word are sufficiently different that, when asked if he would consider turning the messages into a book, Ferguson, who serves as Professor of Systematic Theology at Westminster Theological Seminary in Dallas, was not optimistic, for the amount of work in converting the spoken word to the written is at least as great as preparing a book from scratch. Years later the rediscovery of a computer disk marked “Ruth–Aberyswyth 1996” compelled Ferguson to finally commit the messages to book format. God was good to allow him the opportunity.

Faithful God is an exposition of the book of Ruth. It is short, as expositions go, totalling only 157 fairly small pages. But while the book may be short in length, it contains a message that is both compelling and timeless. Much like the book of Ruth, it is multum in parvo–much in little.

The format of the book is simple. After an introductory chapter which discusses the themes that we will encounter within this book of the Bible, Ferguson dedicates one chapter of his book to each chapter of Ruth. He shows that, as we read Ruth, we will discover that it is a type of mirror in which we will see four reflections: the first is that of the various characters who appear on the stage of the narrative; the second is the reflection of God himself; the third reflection is that of Jesus, who, though not to be born for many years, is clearly present; the final reflection is that of our own lives. By seeing how God has worked in the lives of others, we will know and understand how He works in our lives and be both blessed and encouraged.

One aspect of the story of Ruth to which Ferguson opened my eyes was the godly character of Boaz. I had always seen Boaz as only a minor character in a story about a faithful woman. Yet this book shows that Boaz was a godly man, one who in so many ways exemplified how Christians are called to act and what Christians are called to be. He was a man who loved the Lord and was willing and eager to be used by and for the Lord. And in the end, Boaz and Ruth were both used in a way they would not know until they had left this world for the next, for from them came Obed, Jesse and the great King David. And from the line of David came the Lord and Savior of both Boaz and Ruth.

Ruth, in so many ways, is a lesson about God’s providence. It is a story that teaches us that we simply cannot know all that is happening to and around us. God’s ways are so much higher than our ways that we can only trust and believe that His good purposes are being accomplished even in the midst of great pain and sorrow. It is a story that has aptly been described as one of the greatest short stories of all times. Its lessons are as applicable today as they were thousands of years ago when it was first told.

Faithful God is a book that touched me deeply and one I recommend without reservation to all Christians. It is a small book and one which is unlikely to be promoted or even to catch your eye. But do not let its small size and relative obscurity fool you. This is a wonderful book and one that I trust can and will bless you as it has blessed me. There is much wisdom in its pages. There is much to ponder, to reflect upon, and to prayerfully integrate into a life. It can be read in only a few hours but will bring benefit to any believer’s life. Read it and reap!