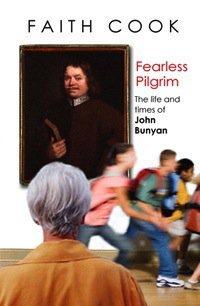 Buy from Amazon
Faith Cook is beginning to make her mark as a Christian biographer. While she has compiled short biographies of hymn writers and other noteworthy believers, more notably she has completed several lengthy biographies of such subjects as Selina, Countess of Huntingdon; Lady Jane Grey; and William Grimshaw. And now, in her latest book, Fearless Pilgrim, she chronicles the life of John Bunyan.

It is interesting that the best-selling biography of Bunyan continues to be Grace Abounding to the Chief of Sinners, Bunyan’s autobiography. While there is no doubt that it is a classic in its own right, this book may not satiate the reader’s desire to learn about Bunyan’s life. It is not strictly chronological and at times and is perhaps not what we expect from a biography today. It is worth reading, to be sure, but there is much more to learn from Bunyan’s life than what he reveals about himself. And so Faith Cook, like many biographers before her, steps in to fill that void.

Bunyan’s name is nearly synonymous with The Pilgrim’s Progress, his greatest work. But his legacy extends through other classics like Grace Abounding to the Chief of Sinners and The Holy War. He was an amazingly prolific writer who produced scores of books, papers and other works. Many of these works were produced during the long years he spent in prison for refusing to relent from sharing the gospel. Others were written in the depths of great pain over the death of his first wife or his favored daughter. Few were written without the presence of some pain or trial.

But there was more to Bunyan than his pen. Though he had only very little formal education, he was also a pastor and one who was known across the nation for his powerful, gospel-focused, biblical preaching. No less than the great Puritan John Owen said to the king, “May it please your Majesty, if I could possess the tinker’s abilities to grip men’s hearts, I would gladly give in exchange all my learning.” Cook does well to write about all aspects of Bunyan’s life without losing herself in his books. And she does well to share the fascinating historical events that unfolded around Bunyan–the wars and revolutions that forever changed the face of England and which gave him hardship, freedom, and then more hardship and more freedom. He lived in tumultuous times and this biography gives a sense of the unique challenges he faced as a Christian in seventeenth century England.

As with most of the books published by Evangelical Press, I wish the publisher had chosen a different font. If you’ve read works by EP, you know the font they use–one that is oddly angular and perhaps too modern, too different. Meanwhile, extended quotes are in Papyrus, a font that is a strange choice as it can be quite difficult to read in any quantity. And then there is the cover. The book has a strange cover and one that seems rather disconnected from the subject matter. While Bunyan is there, he is in the background with children running in front and an elderly woman looking at his portrait. I do not know what the cover is trying to communicate (and neither do others I’ve asked). This is too bad, I think, as potential readers may be more likely to take the book seriously if it had a more dignified cover.

And it deserves one. This is a fantastic biography–one that is well-written and nicely paced. It could so easily have bogged down through discussions of Bunyan’s voluminous writings, but Cook does an excellent job of saying only what needs to be said and allowing the book to move along. One endorsement of this book suggests that it is Cook’s best book yet. Though I have not read all of her works, I’d be inclined to agree. This is a very good biography and one that is worthy of a place on your bookshelf.