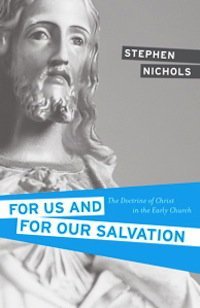 Buy from Amazon Buy from WTS Bookstore
Stephen Nichols is quite the prolific author. A professor at Lancaster Bible College and Graduate School and a graduate of Westminster Theological Seminary, Nichols has written several notable books in the past few years and it seems that he always has at least one title on the “Coming Soon” lists at Crossway or P&R Publishing. Nichols has a gift for presenting church history in a way that is interesting and in a way that appeals to those who may not otherwise know (or care) about the long, storied history of the church. He shows how church history is relevant precisely because the controversies we face today are strikingly similar to ones the church has dealt with long ages ago.

Nichols’ latest effort is titled For Us and for Our Salvation and it examines the doctrine of Christ in the early church. “This book explores [the] controversies over Christ faced by the early church. This book also looks to tell the story of the people involved.” The timing of this title is no coincidence. In the past few years we have seen several attacks on the doctrine of Christ, most of the accusers claiming that the doctrine of Jesus’ divinity was a fabrication of those who followed centuries after His death.

This book tells the story of how the doctrine of Christ was formulated by the early church and how this doctrine was forged in the fires of controversy. It relies, as do many of Nichols’ books, on primary source materials from the key councils and theologians. Nichols offers compelling proof that the divinity of Jesus Christ was not fabricated by his followers centuries later, but was central to the church from its earliest days.

He ultimately has to conclude that

The early church was right in spending so much time and effort on the doctrine of Christ. They were right to contend that Christ is the God-man, very God of very God and at the same time truly human with flesh and blood. They were right to content that Christ is two natures conjoined in one person without division, separation, confusion, or mixture, to use the language of the Chalcedonian Creed. They were also right to contend that the gospel collapses without this belief. In the words of Athanasius and the Nicene Creed, Christ is the God-man “for us and for our salvation.”

I’ve long believed that church historians do not receive their due in today’s church. But a man like Stephen Nichols shows what an integral role they can (and should!) play. Historians have a unique perspective on contemporary struggles in the church and are able to show, to borrow a great little phrase from French, “plus ca change, plus c’est la meme chose.” Or, to translate, “the more things change, the more they stay the same.” There is a sense in which history seems cyclical–controversies arise and are put to rest for a time, but seem to rise again. Those with a view to the church’s past are specially equipped to see these controversies for what they are and to teach how the church dealt with them in the past. Nichols does just this in For Us and for Our Salvation. He leaves no doubt that the answers to these contemporary issues lie in the past.