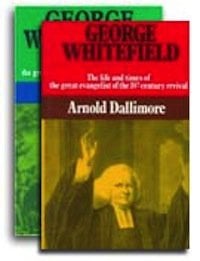 Buy from Amazon Buy from WTS Bookstore
Few recent books have so wide and so deep an impact as Arnold Dallimore’s magisterial biography of George Whitefield. The first volume, stretching from Whitefield’s birth in 1714 to his section visit to American in 1740 was published in 1970 and has since been reprinted six times. The second volume, which stretches from 1740 until Whitefield’s death in 1770, was published ten years later in 1980. It has been reprinted three times. Together the volumes comprise some 1200 pages of detailed biography. Rarely have I had a biography recommended to me by so many and by men of such distinction. Rarely have I benefited more from reading about another man’s life.

I have noticed a strange phenomenon with this biography. Where most books of this one’s scope and impact have been widely and thoroughly reviewed, this one seems to be an exception. As I attempted to write a review I may have found out why this is: it is very difficult to adequately sum up so much content in just a few words. And, as with any biography, it is difficult to measure and summarize the impact of such a book. Instead I am left doing what others have done–writing thoughts on the book that somehow seem disconnected and inadequate. Even Gary Gilley, a reviewer who is rarely lost for words, can write no more than this: “It would be difficult to lavish too much praise on Dallimore’s two volume biography of the famous eighteenth century evangelist George Whitefield. This is the definitive work of Whitefield’s life and ministry, dispelling many misconceptions while showing the true character and impact of this most remarkable man. Along the way the reader also receives valuable insight into the lives of the Wesleys, Jonathan Edwards and the Moravians. This is one of the greatest biographies ever written.”

The Foreword to the first volume is supplied by no one less than Dr. Martyn Lloyd-Jones. The Doctor suggests that he waited decades to find a thorough and authoritative biography of Whitefield, a man he regarded as a historical hero. This book, he felt, which appeared on the bi-centenary of Whitefield’s death, achieves the excellence Lloyd-Jones knew had long been missing. Reflecting on the life of the subject he writes “May the reading of this book produce in us the same spirit of utter submission, ready obedience, and unshakeable reliance upon the power of the Holy Spirit that characterized his life and ministry. Whitefield never drew attention to himself but always pointed people to his God and exalted his Lord and Savior. May he, though now dead for nearly 200 years, do the same for countless thousands through the reading of this book!” The intervening years, almost forty of them, have shown this to be the case.

This book’s subtitle, The life and times of the great evangelist of the 18th century revival, is important in understanding the book. Whitefield found himself one of the sparks of the the Great Awakening and the revival of the 18th century. While other men played important roles, Whitefield was the pin at the center of the wheel. His tireless itinerancy took his preaching ministry to almost every corner of the United Kingdom and to almost the whole of the settled portion of the United States. But for illness he would also have extended his ministry to Canada. Perhaps one of this book’s greatest contributions is in helping people separate the life and contributions of George Whitefield from those of John Wesley–a man who Whitefield always loved but who so often opposed him. This biographies shows conclusively that it was Whitefield’s ministry that sparked the awakening.

I was grateful to see that Dallimore deals fairly with Whitefield’s shortcomings in these volumes. This is no hagiography–worship of a saint that is free from difficult examinations of the subject’s failings. Though Dallimore has to confess that he finds surprisingly little fault with the man, he deals frankly and forthrightly with those areas in which Whitefield showed immaturity, poor judgment or poor discernment. He questions Whitefield’s decision to marry and the unusual circumstances surrounding his first rejected proposal of marriage. He does not shy from discussing Whitefield’s role in justifying and even promoting slavery in the colonies. He does not allow the passing of the years or his deep respect for his subject to mislead him or to excuse sin. Experience shows that this quality is surprisingly rare in such biographies.

Together these two volumes represent a financial investment that is not insignificant. Purchased together they are likely to cost at least sixty or seventy dollars. But I can testify, as can a long list of people of far greater wisdom and discernment than I, that they are well worth the investment.