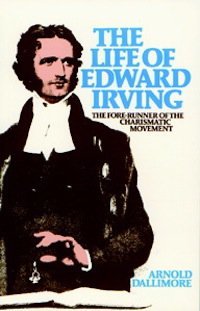 Buy from Amazon Buy from WTS Bookstore
“I look back upon him with awe, as on the saints and martyrs of old. A holy man, in spite of all his delusions and errors. He is now with his God and Saviour, whom he wronged so much, yet, I am persuaded, loved so sincerely.” So said Robert Murray McCheyne of Edward Irving. And in those words McCheyne aptly summarizes the legacy of Irving, a man of unusual ability, a man who by so many appearances genuinely loved the Lord. And yet he was a man who had some very strange and dangerous beliefs and a man who was fascinated with spectacular manifestations of spiritual gifts. He was the forerunner of the contemporary charismatic movement.

Born in 1792, Edward Irving was a Scottish preacher, a man who had inherited the legacy of a deeply theological faith. Licensed to preach in the Presbyterian churches, he quickly became noted as a speaker and preacher for his intellectual and eloquent sermons. But he was also known as a kind and attentive pastor who found great joy in visiting the homes of the people in his care. He loved these people deeply and was committed to them. He was at times shockingly arrogant and at other times deeply humble.

In 1822, after several years of ministry in Scotland, Irving was invited to take the pastorate at Caledonian Church in London. His eloquent speech was soon noticed by many of the London elite and Irving’s star rose quickly until his church was one of the most popular in the city. In these years Irving became interested in, and then obsessed with, prophecy and the charismatic gifts. And it was not long before these emphases dominated his ministry and dominated his church. Services became a cacophony of tongues, of prophecy, of elements that began to overtake the preaching of the Word.

As Irving’s church grew, it became increasingly dominated by the mysterious, the charismatic, the manifestation of God’s special gifts. In 1832 his church moved to a grand new building and in 1833 he was deposed from the ministry by the Church of Scotland, having been found guilty of the charge of heresy for believing that Christ was in some way less than perfectly sinless. Irving’s remaining two years were painful ones as friends began to doubt the validity of all of the manifestations of the Spirit and as the prophets Irving had raised up took over his church and demanded the place of superiority. Burned out and disheartened, Irving died in the closing days of 1834, still quite a young man.

These few words of biography hardly do justice to the man and to his impact both short-term and long-term. Arnold Dallimore’s Forerunner of the Charismatic Movement: The Life of Edward Irving does a far better job. Dallimore describes the man in all his highs and lows, in all his strengths and weaknesses. I found it a particularly helpful book in that most of the biographies I read are of “good guys” or “bad guys.” Most of them are black or white, easy to understand. But when it comes to Irving there are such strange goods and bads that I hardly know how or if to categorize the man. His spiritual strengths shine through and I was left with a picture of a man who genuinely loved the Lord. And yet he had some horrible blind spots, some aspects of his ministry that were terribly unbiblical. This biography, more than any other I’ve read, bends the mind and presents a figure who was at times brilliant and at times hopeless.

But in the end I had to conclude, along with Dallimore (and McCheyne) that Irving did love the Lord. Though he was so often wrong, he was sincerely wrong. His life offers lessons that we can continue to learn from today–the danger of accepting sources of authority outside the Bible, the dangers of creating a kind of two-tier faith in which some have further gifts while others do not, and the dangers of seeing all sickness as a mark of sin rather than a result of sinfulness. All three of these mark the charismatic movement today to various degrees.

Forerunner of the Charismatic Movement differs substantially from Dallimore’s other biographies (Spurgeon, Whitefield, etc) in that it deals with a figure who is as notable for his weaknesses as his strengths. And yet it retains what makes Dallimore’s biographies so good: it offers a clear picture of the subject, explains the impact of his life and offers lessons we ought to learn from it. I highly recommend that you read it.