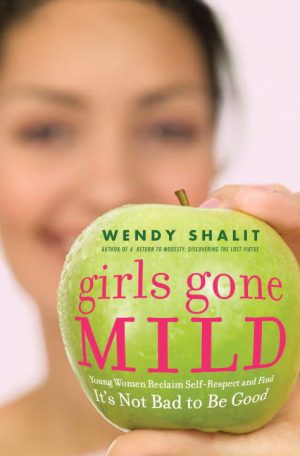 Buy from Amazon
In 2000, when she was only twenty-three, Wendy Shalit published A Return to Modesty: Discovering the Lost Virtue, a book in which she argued that the sexual revolution may not have been entirely beneficial for women. She decried the lack of modesty this revolution has brought about and, according to TIME defended “compellingly, shame, privacy, gallantry, and sexual reticence.” Of course many people, and feminists in particular, were disgusted with the book and ruthlessly mocked her.

In her second book, Girls Gone Mild, she writes about a new trend she has discovered in speaking to thousands of girls and young women in the aftermath of the publication of A Return to Modesty. She draws upon over 100 in-depth interviews and thousands of email exchanges with women from ages twelve to twenty eight, representing diverse racial, religious and economic backgrounds. Some identify as Christians or Jewish, liberals or conservatives, feminists or not. The one thread tying all of these together is a desperation to find new and better role models. Shalit says the book is “about my search for an alternative to our Girls Gone Wild culture. It’s about finding a way to acknowledge sexuality without having to share it with strangers. It’s about rediscovering our capacity for innocence, for wonder, and for being touched profoundly by others.”

Shalit opens by discussing Bratz, those Barbie-like dolls that look “hotter than hot,” appearing overtly sexual in slinky clothes. Marketed to pre-teen girls, these dolls encourage even the youngest girls to see themselves as sexual creatures who can use their sexuality to attract others. In a Bratz book even the youngest girls are asked to fill in the blanks: “When I want to look hot for an extra special occasion I’ll put on _________.” “These days, the way dolls are dressed,” Shalit says, comparing Bratz to a beloved Cabbage Patch Doll from her youth, “the question is not so much ‘Is my dolly real?’ as ‘How much does she charge per hour?'” From Bratz and the countless similar products, whether sexy dolls or t-shirts sold to infants emblazoned with sexy slogans or thong underwear for six year olds, we see that being a child is no longer a valid excuse not to be sexualized. And further to this, being publicly sexual has become the most, and possibly the only, acceptable way for girls to express maturity. Thankfully a rebellion is underway, and one that may even represent the dawning of a fourth wave of the feminist movement. This rebellion, girls and young women rising against the sultry status quo, is a reaction to the over-sexualization of nearly everything. The rebellion is the theme of the book. It shares equally the despair of the status quo and the hope for a better future.

Our culture has some things backward. Where it was once the “bad girl” who stood out from the crowd and who was known for her reputation, today the bad girl is the new normal, the new expectation. The “good girls,” on the other hand, the ones who refuse to engage in sexual behavior and the ones who refuse to flaunt their bodies, are the ones who face rejection from their peers and, tragically, even from adults. Young people need to be and to act bad just to fit in. And this is exactly what they do. “Consider how girls today need to be thin, available, and always sexy. At the same time they are supposed to have no hopes, no messy feelings, no vulnerability. They must be aggressive, yet somehow inviting. It’s complicated, and to rebel against the new bad-girl script takes enormous confidence.” But it can be done. Unfortunately it needs to be done with few role models to serve as guides or mentors. Where a group of girls is rising and extolling the benefits of chastity and more traditionally feminine behavior, it is adults who are criticizing this movement and attempting to keep it from gaining ground. Many young people are tiring of the game and are tired of experiencing the consequences of bad girl behavior, but adults continue to push them into it.

Shalit thinks this movement towards chastity, towards feminine virtue, would be far greater and far more powerful were it not for the repression girls experience because of the new normal. Many women stifle their desires for more chaste lifestyles simply because society teaches that casual sex is good and wonderful and healthy. Further, society teaches that it is the weak who delay sex while the strong, those who are uncomfortable with their sexuality, are the ones who hold out. Similarly, the ones who are comfortable with their bodies are glad to exhibit their nakedness in public while only those who are ashamed of their bodies keep them covered.

The book has many stories of hope. The author writes, for example, about “Pure Fashion Divas,” girls who hold fashion shows exhibiting clothing that is trendy but not exhibitionist. The way people dress, after all, makes a powerful statement. “Dress can turn a young woman, unwittingly, into walking entertainment for men, or it can do the opposite, and cause people to focus on her internal qualities.” A statement that seems shocking only for how old-fashioned it sounds today. Shalit is correct when she shows that today’s bad girl is really just a girl who is prone to please others. An overwhelming desire to conform to other people’s expectations leads them to surrender their dignity and their sexuality. The costs are high. I was intrigued by a chapter called “Excuse Me, Ma’am, Have You Seen My Friends?” Here Shalit argues that women are fast losing their ability to maintain strong, meaningful friendships. Women today enjoy fewer same-sex friendships because adultery and competition for men is now normal. Women no longer trust other women; they no longer understand what it is to be happy for someone else and to rejoice with those who rejoice. Their relationships are strangled by a sexualized, competitive spirit. Ironically, the liberated woman is increasingly a woman who is alone. The consequences of the new bad girl behavior eventually isolate women from even each other.

I think I can be excused for often thinking, while reading this book, “Isn’t this what the Bible has been saying all along?” Shalit is Jewish and conservative in her belief and practice of her faith. And, in fact, faith is a theme throughout the book as Shalit often turns to the Old Testament or to Jewish tradition to show how Scripture provides wisdom that is applicable to this topic. Many of the examples of young women who fight the status quo are Christian girls, fed up with the sexually-charged atmosphere around them. The Bible has been telling us all along that God has created men to be men and women to be women. Men and women are equal in value and worth but separate in function. The feminist movement has been pushing women, exhorting them to become more like men. But this book shows, as have many Christian authors in recent years, that true liberation comes not from pushing aside feminine distinctives but by rediscovering, embracing and celebrating them. What makes this book distinctive, at least among the similar titles I’ve read, is that it comes from outside the Christian publishing industry. It ties in nicely with titles like Unhooked, Female Chauvinist Pigs and others. It has already been widely reviewed and is sure to generate a great deal of discussion. If Shalit’s first book is any indication, it will generate anger, bitterness and outrage. Yet hopefully it will also give young women at least a few role models–pure fashion divas, girls who refuse to give it all away, and perhaps the author herself–who can be role models to a new generation of girls gone mild.

Somewhat ironically, I wrote this review while spending time with my family at the beach. If we are in the midst of a trend towards modesty, I don’t think there is much evidence of it here. My wife and I conferred and agreed that swimwear does not seem to be showing much in the way of modesty. Yet I do believe that Shalit’s thesis is right. Girls are increasingly fed up with the way they’ve been told to act. They are the ones who bear the consequences for their behavior and they are the ones who are beginning to agree that enough is enough. As the father of two girls I hope and pray that this movement lives through its infancy and makes an appreciable impact. Few things would be healthier for society than to rediscover some semblance of femininity as defined by the One who created women to be women.

I found Girls Gone Mild a fascinating read and am glad to recommend it to others.