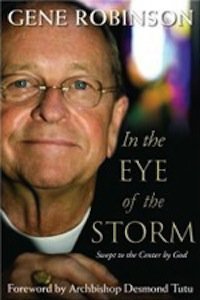 In 2003 Gene Robinson was elected bishop of the tiny Episcopal Diocese of New Hampshire after having served as assistant to the previous bishop for almost eighteen years. Robinson’s profile, both within the Episcopal Church and outside of it, is completely out of proportion to the size of his charge. He is, after all, the first practicing homosexual to be elected as a bishop within that church body. His story has been told widely within the media and he is regarded as a hero and leader to many within the homosexual community. In the Eye of the Storm is his first book. Where I had been expecting an autobiography, that is only partially the case. While the book does deal with the events surrounding Robinson’s rise to the international spotlight, the book’s five parts contains essays and reflections on a variety of themes. He begins with homosexuality and the church and then moves to everyday Christianity, “notes from the margins,” building the body of Christ and issues related particularly to the Anglican communion.

As the reader might expect, there is much in this book that will be at odds with classic understandings of the Christian faith, and particularly as the church has interpreted the Bible’s teaching on human sexuality. Needless to say, Robinson’s interpretation of the Bible’s position on homosexuality is hardly traditional. We receive a hint of what is to come in Archbishop Desmond Tutu’s Foreword to the book where he writes, “For me, the question of human sexuality is really a matter of justice; of course I would be willing to show that my beliefs are not inconsistent with how we have come to understand the scriptures. It is not enough to say the ‘Bible says … ,’ for the Bible says many things that I find totally unacceptable and indeed abhorrent. I accept the authority of the Bible as the Word of God, but I remember that the Bible has been used to justify racism, slavery, and the humiliation of women, etc. Apartheid was supported by the white Dutch Reformed Church in South Africa, which claimed that there was biblical sanction for that vicious system.”

In the book’s first section Robinson provides a defense for homosexuality within the Christian faith. His arguments are the ones we’ve come to expect, and ones that are incompatible with a proper understanding of Scripture. He attributes much of the Bible’s teaching about homosexuality either to a misunderstanding on our part or on a misunderstanding on the heart of human sexuality on the part of those who wrote Scripture. His understanding of Scripture as being somewhat less than free from error shows up in the statements like this one: “Though I believe the holy scriptures of the Old and New Testaments are the Word of God, that doesn’t mean they are literally the ‘words’ of God, virtually dictated by God through human media. And let’s not forget that the real ‘Word’ of God is Jesus himself.” Later, in a chapter affirming his love for the Bible, he flatly denies the doctrine of inerrancy. He downplays the uniqueness of Scripture by saying “The Bible is the best and most trustworthy witness [to Jesus] but it neither replaces Jesus as the Word not takes precedence over Christ’s continuing action in the world through the Holy Spirit. To elevate the words of scripture to a place higher than the revealed Word of God in Jesus Christ is an act of idolatry.” When a person has relegated the Bible to a place lower than ongoing revelation in other forms, the Bible becomes subject to our every whim. Either the Bible has full authority or it has none.

Once the Bible’s authority has been discarded, we can redraw the faith as we see fit. And this, unfortunately, is precisely what Robinson does. For example, he appears to draw much of his justification for homosexuality from extra-biblical revelation, including a vision experienced by John Fortunato. Never minding what Scripture says, Fortunato and Robinson claim that visions from God trump the revelation of Scripture. He looks outside the Bible to support a doctrine of open theism, denying God’s omniscience and even declaring that before the creation of man God was lonely, desiring a creation to relate to. He declares the biblical account of the fall into sin a myth and denounces the view that celibacy is a moral requirement of God (saying that the better reasons to avoid premarital sex is that it is just too risky physically and emotionally). He declares the Exodus story “one of the greatest coming-out stories in the history of the world” and turns up his nose at a view of humans that could state we are “merely sinners in the hands of an angry God.” He declares that Christian is only one way and not the way to God by saying “I respect and revere all those who have come to know God through other faith journeys. I can only speak out of my own context as a Christian, and I trust others to make the connections and translations into the understanding of their own faith communities.” Ironically, at the beginning of the book Robinson affirms that he is very conservative in his theology; yet he spends the rest of the book proving that statement patently false. No biblical teaching is sacred.

Despite the quantity of poor logic and poor use of Scripture within it, the book proved a valuable read to me on a few levels. First, it helped me understand the arguments made by those who feel that homosexuality can be supported by the Christian faith. This is an increasingly common position and Robinson lays out quite clearly how he feels homosexuality can be not just justified but celebrated as being in every way equal to heterosexual marriage relationships. Second, it served almost as a textbook to the relativistic postmodern mind. A logical mind and a biblical worldview will quickly cut through many of this book’s arguments. I would almost recommend this as a book a person could read to help him sharpen his ability to think critically. Finally, the book showed me that a person cannot simply add homosexuality to the faith without adding and deducting many other tenets of Christianity. I would like to think that there may be Christians who are orthodox in their faith but who have somehow accepted homosexuality as a valid lifestyle. But reading this book shows that many doctrines have to fall before a person can proceed this far. The walls have to have cracked in many places before a person can argue against something taught so plainly within the pages of Scripture. Once those walls have cracked, the whole edifice soon comes falling down to the ground.

This is a book that, sadly, does much more harm than good to the Christian faith. Replete with emotional appeals and charges but devoid of sound biblical argumentation, I hope it will be read with care and discernment. How sad it is when those charged with the church’s growth and protection are the ones taking the lead in leading her away from God as He has revealed Himself in the Holy Scriptures.