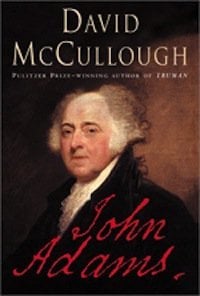 Buy from Amazon
I am a little bit late to the party with this book. Released in hardcover in 2001 and paperback in 2002, John Adams is regarded as one of David McCullough’s greatest achievements. This is no little praise for a man who had previously won a Pulitzer prize (for his biography of Harry Truman)—a reward he was to receive again for John Adams. The precursor to 2005’s 1776, this is a stirring biography and one of the best I’ve ever read. Like McCullough’s other titles, this book is not hard to read and never bogs down in detail. Instead it is fast-moving and gripping, reading almost like a novel.

I am no scholar and am unequipped to comment on the accuracy of McCullough’s portrait of Adams. I will leave that to the historians. So rather than provide a blow-by-blow account of Adams’s life, let me simply suggest a few of the lessons and observations I drew from this book.

John Adams loved life and sought to truly enjoy it. Even in his final days, when he was ill and suffering from fading eyesight, he continued to enjoy his life. He loved sharing life with others. He was content to live a simple life consumed with hard work and lots of good books. His greatest pleasures were his wife, his books, and his friends. Though his life was often difficult and though he was often the subject of vicious personal attacks, he really seemed to relish life and seemed loathe to waste even a day of it. I was inspired by his desire to enjoy life, even through its tough moments.

Adams loved and respected his wife in a deep and abiding way. His long and frequent separations from her were the greatest trials he faced in life and he really seemed to be only half a man without her. At one point she is described as his “ballast”—a term I can well identify with as my life continues and as the love for my wife continues to grow. Adams loved Abigail more than anyone and his affection was clear throughout their long marriage. Adams lived a life free from scandal—or at least the kind of moral scandal that plagued contemporaries like Benjamin Franklin and Thomas Jefferson. His wife kept him grounded and was his best friend and closest confidante—just the way I would want it in my life.

From this book we can learn the importance of a father’s involvement in the raising of his family. Adams was often called overseas and he served many years away from his family. Later in life at least two of his children became alcoholics and essentially wasted their lives. Though John Quincy went on to fame and became the nation’s sixth President, both Thomas and Charles struggled through life. Reflecting on being a father, Adams seems to have accepted some of the blame for their ways, acknowledging that his long absences from the family deprived them of the father they needed.

I would have enjoyed reading more about Adams’s religious beliefs and practices. McCullough made it clear that Adams claimed to love some kind of deity and that he was a committed church-goer who had respect and affection for many clergymen, but what was less clear was just what he believed about this God. Looking elsewhere it seems reasonably clear that Adams was more deist than Christian, but this did not come through clearly in the book. A little more attention to Adams’s religious beliefs, as important as they were to the rest of his life and to the founding of the nation, would have been welcome.

Like John Adams I find reading to be a source of great pleasure. Reading this book was pleasurable—not just in learning about a man of such importance, but also just in the act of reading. McCullough is a masterful communicator. This book could so easily have been dry and disinteresting, but with his treatment it has become as good a biography as I’ve ever read. It is a must-read for anyone with an interest in American history or with a particular interest in biographies. I can’t recommend it enough.

The book is available in both paperback and hardcover with a $10 difference between them. If you’re going to buy it, I recommend the hardcover. It’s well worth the extra few dollars!