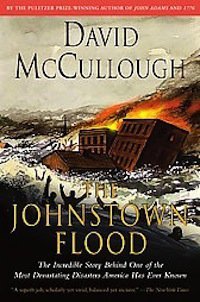 Buy from Amazon
A short time ago I made the decision to read through all of David McCullough’s books. He is a renown historian and a gifted author and I realized that reading his books would be both educational and enjoyable—not just to learn history from a master but to learn from his style of writing. Few men can write history with the lucidity and character of David McCullough. This is why, I’m sure, all of his books remain in print, even forty and fifty years after publication, and why he has twice received the Pulitzer Prize (not to mention multitudes of other accolades).

Intimidated by the sheer size of his biography of Truman, and having already made my way through 1776 and John Adams, I turned recently to The Johnstown Flood, one of his lesser-known works. This book, which weighs in at a “mere” 300 pages (quite short for McCullough’s standards) deals with one of the most devastating disasters in American history. On May 31, 1889, a dam burst near Johnstown, Pennsylvania, sending a massive wall of water hurtling towards the thriving town. It smashed into Johnstown, killing more than 2,000 people. But it was more than a tragedy—it was also a scandal, for the dam was privately owned and had been built to make a private lake on a summer resort property patronized by such tycoons as Andrew Mellon, Andrew Carnegie and Henry Clay Frick. Americans were outraged.

Though the event has been largely forgotten, at the time it was a national scandal and riveted the attention of Americans much the way Hurricane Katrina did when it devastated New Orleans a few years ago. For weeks and months it was front page news across the nation. Johnstown would never fully recover and, once a bustling town with a great future, it quickly faded in favor of other nearby towns.

While The Johnstown Flood may not be a book carrying lessons of great importance for our day (“Don’t neglect dams?”), neither does it need to be. It is a fascinating read and an interesting little slice of history. Through the pen of David McCullough the events come to life and the reader is transported a century into the past. Like all of the works of McCullough I’ve read to this point, this one is well worth the read.