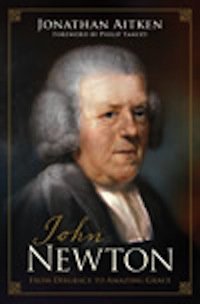 John Newton lived a life that could only have been more dramatic if it were the product of fiction. Forced into naval service when he was young, Newton endeared himself to no one, living a life of utter disregard for authority. While attempting to desert he was captured and dropped to the lowest ranks of seamen. He eventually found a way to be released from the military and wormed his way onto a slave shape with which he sailed down the long coast of Africa. Being deserted for a time on that dark continent, he was made the slave of a slave-trader and suffered terrible abuse at the hands of his captor. After a time he was rescued and became the captain of his own slave ship. But then, during a long passage across the Atlantic Ocean, he began to read a Bible and underwent the remarkable transformation chronicled in the song he wrote years later.

Newton worked in secular employment for a time but soon felt the call to ministry and was ordained an Anglican priest, a position he retained until his death in 1807. In the intervening years he became widely-known through his biography and through his efforts to abolish the slave trade. He served as mentor to William Wilberforce who fought a long but ultimately successful campaign to ban the British slave trade. It was two hundred years ago that this battle was won and two hundred years ago that Newton died. As Eric Metaxas has written a new biography of Wilberforce to mark the occasion, Aitken has done the same with Newton.

And it is quite a good biography. Aitken, who has previously chronicled the lives of Richard Nixon and Chuck Colson is a recent convert who underwent quite a radical conversion. He does a fine job of bringing the life of his subject to a whole new generation. While it may lack the depth of some of the greatest biographies of the greatest Christians, it is eminently readable and enjoyable from the first page to the last. A unique contribution of this book is that it relies on diaries and correspondence that have previously been unpublished. Newton’s own writing, and especially his letters, provide a good deal of the book’s content and some of its most edifying. In fact, the content and depth of these letters persuaded me to seek out a volume published by Banner of Truth titled simply The Letters of John Newton.

The theme of this biography can be aptly summarized by the final words spoken by this hero of the faith. “I am a great sinner, but Christ is a great Savior.” This account takes us from Newton’s days of joyous depravity to his dramatic conversion to his new life and ultimately to the moment he went to meet the great Savior he had come to know and love. It is a worthwhile addition to any library.