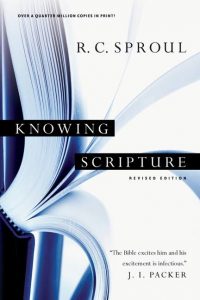 Buy from Amazon Buy from WTS Bookstore
One of Satan’s greatest triumphs must surely be in convincing Christians to abandon the Bible, or at least keeping them from really mining its depths. He tries to convince us that the Bible is outdated, unimportant or less important than many other things. He tries to convince us that it is difficult to understand and that we should rely on others to interpret it for us.

R.C. Sproul wrote Knowing Scripture early in his career to address these concerns and out of a desire to see Christians dedicate themselves to a systematic study of the Bible. Written in 1977, this is one of Sproul’s earliest but most important and highly recommended books.

He dedicates a chapter to an introduction to hermeneutics. Do not be scared by this technical word as it simply means “a list of rules and guidelines for interpreting Scripture.” Some of the concepts he introduces are:

The bulk of the book is contained in a chapter that lays out ten rules for Biblical interpretation. They are:

Each of these points receives careful attention. Though some of them may sound shocking (such as “read the Bible just like any other book”) Sproul provides solid reasons for the necessity of each.

The author then turns his attention to a discussion of culture and the Bible. Just I am confined to a specific cultural setting, so were the authors of the Bible. We need to be able to discern the difference between principle and custom in regards to the Bible. Sproul provides several guidelines for doing this.

The book closes with a discussion of some resources that may help in studying the Bible. These range from commentaries to dictionaries and lexicons. If there is an area of this book that shows its age, it is in this section. There are so many more resources at our disposal now, especially on the Internet, that this section loses some of its usefulness. A discussion of modern translations and some of the newer commentaries would be helpful. Perhaps a second edition of this book is in order. One thing I found amusing is that the author says he does not agree with study Bibles, yet years later was the editor of the New Geneva Study Bible (later renamed the Reformation Study Bible). I presume his view changed!

This book does a wonderful job of introducing hermeneutics for the lay person and I would recommend it for any Christian. It presents advanced concepts in a way that it easy to read and understand. My only complaint is that it advances many rules but does not dedicate any attention to the “how’s” of hermeneutics. Some examples where the author led us through some difficult passages would have been most welcome and would have helped ensure we not only understood the rules but also understood how to use them.