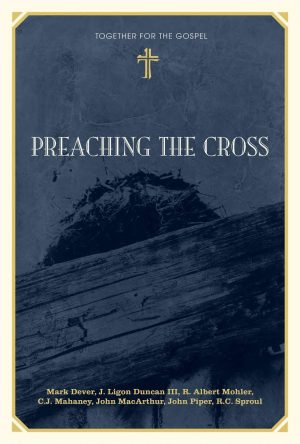 Buy from Amazon Buy from WTS Bookstore
You may experience a sense of deja vu when reading Preaching the Cross since this book is the product of last year’s Together for the Gospel conference. Several thousand men were in attendance and many have since read summaries of the sessions or have listened to the audio recordings. While the chapters are not mere transcriptions of the messages delivered at the conference, they are, as we would expect, very similar. Of course they are also more polished and are now nicely packaged in a hardcover book.

The task of overseeing the book, which is dedicated to “the next generation of preachers of the cross,” and of writing its introduction fell to Mark Dever. He explains the connection between the book and the conference in this way:

Every once in a while God uses a conference such as this in a strategic way to put new heart in his under-shepherds and so bless his people. We prayed that this would be such a conference, that through it God would tune our hearts and minds to him as we thought and talked together about preaching the gospel of the Lord Jesus Christ. We prayed that those who attended would know great blessing from it.

Now, long after the conclusion of that event, we want to give thanks to God for the encouragement many did indeed experience as a result of that gathering and for the instruction given and friendships made there. In introducing this volume, which is comprised of the conference addresses, I want to say a little bit more about the history of the conference, the “heroes” we invited to join us, and the hopes that we had for the conference attendees–and for you as you prepare to read these messages.

Dever goes on to share the history of the conference, explaining how the four men came to know each other and to share a common desire to put together this conference.

It was at one of those meetings that, during our typically long, enjoyable, question-then-anecdote-then-straight-into-argument and- then-into-passionate-agreement conversations, one of us (I think it was Al, but we all were making the same kind of noises) remarked on the edifying nature of our conversations, and we all expressed a desire for pastors to experience this same sort of fellowship. As we talked, we came up with the idea of holding a conference at which the four of us would speak and afterward sit around and talk about the talks in front of our audience. (We talk about the talks late at night anyway, whenever we find ourselves together at a conference, although we do it without the audience!) We weren’t sure what kind of audience we would get for our event, but we knew that we’d enjoy it no matter who came; any benefit accruing to others would be a bonus.

And just like that a conference was born. Though there were and still are several important theological disagreements between these men, they gladly laid aside these secondary issues for the sake of the gospel. “We thought that interest in the conference might be generated in part because of our differences, which actually serve to highlight our agreements,” he writes. Dever discusses how they decided to invite three of their preaching heroes to the conference. He then introduces each of the three men: John MacArthur, R.C. Sproul and John Piper and reflects on the impact each of them has had on this group of men. I particularly enjoyed his description of John Piper:

And then there is that current evangelical rock star, John Piper! What a gift John is to the church. While too many of us are saying a lot of things quickly and running on to the next, John stops and stands and stays and stares at God’s Word. Sometimes he stares at something that seems so obvious, but he keeps staring until it begins to expand and fill the horizon of his sight. It becomes rich and detailed and luscious and intricate and full and demanding and hope-giving and life-affirming and sin-denying and sacrifice-requiring–and adjective-adding. John prays and thinks until a part of God’s Word which seemed simple and obvious becomes fresh and powerful.

The remainder of the book simply provides the content of each of the conference’s seven keynote addresses. Mark Dever draws a contrast between a real minister of the gospel and a counterfeit one, showing that a real pastor preaches a cross-centered message, lives a cross-centered life and has cross-centered followers. Ligon Duncan provides eight exhortations to preach Christ from the Old Testament and not to fall prey to dwelling only on the New Testament, tacitly creating a canon with the canon. Al Mohler encourages pastors to preach with the culture in view and helps the reader understand the cultural context in which we find ourselves. R.C. Sproul writes of the center of Christian preaching in the great doctrine of justification by faith alone, first presenting the Roman Catholic view of justification and then introducing the biblical understanding. John Piper discusses preaching as expository exultation for the glory of God, first reflecting on preaching that is shaped by the glory of God, then portraying the glory of God that inspires this kind of preaching, then offering his understanding of how people awaken to this glory, and finally explaining how all of this calls for the kind of preaching he calls expository exultation. C.J. Mahaney encourages pastors to heed Paul’s exhortation to Timothy to “watch your life and doctrine,” explaining both the importance of this and showing practical ways of doing so. Finally, John MacArthur wraps things up with his ten-point explanation of why he still preaches the gospel, even (or, more rightly, especially) after forty years of gospel ministry. The Together for the Gospel statement of affirmations and denials is included as well.

Some will wonder if there is any need for this book or may be disappointed that it offers little content that is different from the conference’s addresses. I think this book is a valuable addition to any library. While I was at the conference and now have access to the audio files, I found there was a great benefit to my soul in re-reading each of these chapters and in pausing, once again, to celebrate the gospel. Like the conference, this book provides a call for pastors to preach the gospel and to always keep the main thing the main thing. Where a million fads call pastors to do everything but preach the gospel, the authors of this book turn to Scripture to call us all back to a message that is immune to fads–a message that has stood unaltered for two thousand years. They call us to the glorious gospel of Jesus Christ. And there is nothing disappointing about that.