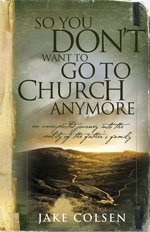 Jake Colsen is the author of So You Don’t Want to Go to Church Anymore. Jake Colsen does not exist. Rather, he is a pseudonym for the combined work of Dave Coleman and Wayne Jacobsen. You may recognize Wayne Jacobsen as one of the founders of Windblown Media, the company that published a little book called The Shack—a little book that has gone on to sell well over a million copies. As The Shack has found international renown, it has pulled in its wake Windblown Media’s two other titles, both of which are written or co-written by Jacobsen. At the moment I write this review, So You Don’t Want to Go to Church Anymore is ranked #259 in Books at Amazon and #4 in Religious & Spirituality Fiction (placing behind three editions of The Shack). Its success is very clearly related to that of The Shack (where it has an advertisement on the back page).

While So You Don’t Want to Go to Church Anymore must be evaluated on its own merits, comparisons to The Shack are inevitable. Both are works of fiction but fiction designed to teach theology; both involve an ignorant Christian who meets a wiser person who explains to him the truth about Christianity (in The Shack this person is God while in this book it is a man named John); both books focus primarily on dialog and are in no way Ted Dekker-like thrillers where the theology is veiled in the story; both are successes for their publisher and, in their own way, most unlikely successes.

So You Don’t Want to Go to Church Anymore is a story about a man named Jake (the book is meant to be fictitiously autobiographical where the author, Jake Colsen, writes about his own experiences). Jake is an associate pastor at a fast-growing mega-church. In the book’s early pages he encounters a man named John whom he comes to believe may just be the Apostle John (though this question is never actually resolved). While he does not have much of an opportunity to interact with John at first, he hears words which set his heart and mind reeling. He realizes quickly that his Christian faith is almost hopelessly rote and anemic. “Although I had been a Christian for more than two decades, I had no concept of who Jesus was as a person and no idea how I could change that.” This book covers a span of months or years which sees him grow from a pastor of immature faith to a man of wisdom and mature faith.

The book is framed around continued encounters with this character John. In fact, almost every chapter begins with Jake thinking or worrying about a particular issue, only to have John quickly and mysteriously materialize. John helps Jake overcome his fears and his questions and then disappears to leave him to think about and to implement the things he now knows.

The predominant theme of the book is issues surrounding the local church (and because I would like to keep this review reasonably short, I will deal only with this issue in the review). The overall teaching is that the church as most Christians understand it is a human institution and one designed primarily to gain and to protect power. The Bible, according to the authors, does not teach that Christians should be part of any kind of institutional church. This is not to say that we should leave mega-churches to join smaller house churches; rather, we should abandon this kind of church model altogether. While the authors do not clearly or precisely share what Christians should or can do in its place, it seems that it would look something like this: “Instead of trying to build a house church, learn to love one another and share one another’s journey. Who is he asking you to walk alongside right now and how can you encourage them? I love it when brothers and sisters choose to be intentional in sharing God’s life together in a particular season. So, yes, experiment with community together. You’ll learn a lot. Just avoid the desire to make it contrived, exclusive, or permanent. Relationships don’t work that way.” The book’s appendix is a pamphlet written by Jacobsen which addresses his view of church life. Here he says, “Fellowship happens where people share the journey of knowing Jesus together. It consists of open, honest sharing, genuine concern about one another’s spiritual well being and encouragement for people to follow Jesus however he leads them.” By the book’s closing pages, Jake has left the church and now meets irregularly with an irregular group of people from his community. This is presented as being a form of authentic spirituality that is closer to the biblical model than that which is practiced by the vast majority of Christians today. It is the better alternative to church as most Christians know and experience it.

Of course I would be drawn to this model, too, if my church was anything like the one Jake comes from. His congregation is much like a drunken fraternity. The pastor is an angry man who holds tightly to his power, who expects people to lie to protect his reputation and who is having an abusive affair with a vulnerable congregation member. The members of the church are petty and divisive, heartlessly shunning those who disagree with them, demanding immediate restitution for any perceived wrong, persecuting children who do not properly memorize their verses, and fighting for positions of prominence within the local church. Overall, the authors give an exceedingly negative portrayal of the local church. It is a portrayal that includes all the stereotypes so treasured by those who hate Christianity. The church members are hopelessly ignorant, able to recite chapter and verse but knowing nothing of the “heart” of Scripture. Hence even two lifelong pastors react with apparent shock when they learn that “church” in the Bible primarily refers not to an institution but to a people (as if no Protestant has ever bothered to distinguish between the visible and the invisible church). Against this brutal portrayal of Christian community, the authors present their alternative. And needless to say, it looks awfully good in comparison.

But what if Jacobsen, instead of fabricating a ridiculous parody of a church, had looked to the New Testament church? While So You Don’t Want to Go to Church Anymore is theological fiction, the reader may well note that there is little reference to the Bible. Because it is fiction we might not expect to see direct references to particular passages (and, indeed, we do not) but there is little by way even of indirect references. John assumes a certain knowledge of Jesus and common sense spirituality and uses this as his bridge to the hearts and minds of the reader. Rather than saying, “The Bible says this…” he tends to say, “This is what the church is like… Doesn’t my version look better?” And of course, with such a dysfunctional church in mind, it really does look better. He looks to the New Testament church on occasion, but is awfully selective, taking only those elements that further his case. He eschews any kind of church hierarchy or office (such as elder and deacon) and in its place leaves only peer-to-peer relationships. If it is in any way formal or organized, it is wrong, it would seem.

Though Jacobsen does occasionally affirm that institutional churches may do some good, the theme of the book comes through loud and clear. In the appendix Jacobsen says, without any apparent trace of hyperbole, “I can tell you absolutely that my worst days outside organized religion are still better than my best days inside it.” And from cover-to-cover, the book is heartlessly negative towards the local church. Christians should, and perhaps even must, withdraw. But the case is made through emotion and through false comparison. Those who hold closely to Scripture may affirm some of what Jacobsen teaches in this book, but they must reject its overall message.

Here are a few interesting quotes from the book:

“Most of what we call ‘church’ today are nothing more than well-planned performances with little actual connection between believers. Believers are encouraged toward a growing dependency on the system or its leadership rather than on Jesus himself. We spend more energy conforming behavior to what the institution needs rather than helping people be transformed at the foot of the cross!”

“Jesus indicated that whenever two or three people get together focused on him, they would experience the vitality of church life.”

“My favorite expression of body life is where a local group of people chooses to walk together for a bit of the journey by cultivating close friendships and learning how to listen to God together.”

“By providing services to keep people coming, [an institution] unwittingly becomes a distraction to real spiritual life. It offers an illusion of spirituality in highly orchestrated experiences, but it cannot show people how to live each day in him through the real struggles of life.”

“The more organization you bring to church life, the less life it will contain.”

“As long as we see church life as a meeting we’ll miss its reality and its depth. If the truth were told, the Scriptures tell us very little about how the early church met. It tells us volumes about how they shared life together. They didn’t see the church as a meeting or an institution, but as a family living under Father.”

“Any human system will eventually dehumanize the very people it seeks to serve and those it dehumanizes the most are those who think they lead it.”

“[God’s wrath at the cross] wasn’t an expression of the punishment sin deserves; it was the antidote for sin and shame.”

“Religious systems prey on people’s insecurity. They haven’t learned how to live in Father’s love, to follow his voice and depend on him.”